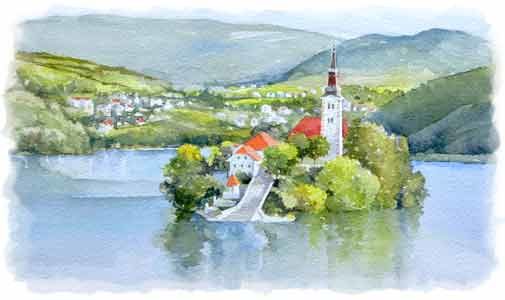 Nearly 30 years after the fall of the Berlin Wall much of Eastern Europe, what was behind the Iron Curtain anyway, remains shrouded in mystery for North Americans. But those intrepid travelers who’ve made it there—and pioneering expats who’ve settled down—have discovered picturesque towns, steeped in medieval and Renaissance history, with the storybook architecture and natural scenery to match.

Add in vibrant cultures, delicious local cuisine, friendly people, and low cost of living and you have little-known destinations that are well worth a closer look and rival the likes of anything you find in the western half of the continent.

These towns have survived the centuries and, in recent years, have seen revitalization of historic districts, even as the modern world grows around them. Strolling the cobblestone streets is like walking through history, in the footsteps of the crusading knights, simple townsfolk, and aloof nobles that once made these places their home.

Český Krumlov, Czech Republic – A Center for Arts and Culture

Founded in the 13th century as a settlement surrounding a castle built by a noble family, Český Krumlov was a key stop on trade routes through the Kingdom of Bohemia thanks to its position on the Vltava River. The castle—and growing town—changed hands many times over the centuries due to warfare and royal favor. The baroque, Renaissance, and gothic architecture of the historic center is showcased in its castle, churches, and theater, as well as homes and civic buildings. The city suffered from lack of maintenance during communist times but has been reinvigorated since 1989’s Velvet Revolution. Today, it’s a UNESCO World Heritage site and hosts various music and cultural festivals throughout the year, including one where inhabitants dress in medieval costume for jousting, fencing, and other events.

On the market is a 400-year-old two-bedroom home in the historic center. It’s a protected monument but is renovated and ready to live in; there’s even a cellar dug into the rock—perfect for wine. Price is $175,000. In the nearby countryside is a two-bedroom home on 0.3 acres. It’s listed at $192,285. See: Czech-republic.realigro.com and Sreality.cz.

It’s a majestic site. A vibrant green glacial lake lined with thick forest and rocky cliffs…with the jagged peaks of the Julian Alps looming above all. That’s Lake Bled in Slovenia. The most well-known images of Bled are the medieval church on a small island in the middle of the mile-long lake (previously the site of a temple dedicated to a goddess of love and fertility) and red-roofed 17th-century Bled Castle clinging to the hillside on the lakeshore. The vista are ever-changing. Picture evergreens coated in snow in winter; the yellow, orange, and gold leaves of autumn.

Bled is the perfect setting for adventure sports like horseback riding, hiking, biking, and canyoning (often in Triglav National Park next door), as well as skiing at nearby slopes (15 minutes away) in winter. Italy is only 1 ½ hour’s drive. It attracts visitors from around the world for outdoor activities. A one-bedroom modern apartment in town is available for $248,361. A stone’s throw from the lake with mountain views is a two-bedroom apartment for $193,447. See: Sloveniaestates.com.

While it’s the capital of Slovakia (the smallest capital city in Europe) and home to nearly a half-million people, Bratislava has managed to retain its history and unique culture. The old town sits at the base of a hill dominated by a 9th century medieval castle. It’s the perfect place to take a day to get lost among churches, palaces, squares, and parks. Perhaps you’ll find yourself strolling along the mighty Danube River. And there are plenty of museums, cafes, and restaurants to patronize. A recently renovated one-bedroom apartment close to shops and public transportation is listed at $162,246. In a new development on the outskirts is a newly built apartment, one bedroom, for $190,950. See: Real-estate-slovakia.com.

Brașov, Romania – The Citadel in the Carpathians

Surrounded by the Carpathian Mountains, Brașov is a place of grand plazas and narrow cobblestone streets in the Transylvania region. The historic town center, full of white and pastel colored baroque, Renaissance, and gothic buildings, is surrounded by a modern city of nearly 300,000. It began life as a walled citadel built by crusading Teutonic Knights in the 13th century to guard against invading Mongols and Turks. The walls—40 feet high and seven feet thick can still be glimpsed in some areas.

Brașov grew on the strength of trade—it was a main link between the Ottoman Empire and the rest of Europe. Today, it’s a favorite spot for travelers. Be sure to check out the expansive Council Square, and, if it’s a nice day, stop in a sidewalk café to enjoy the fresh mountain air and a coffee. For $280,811 you can secure a three-bedroom apartment in the middle of the historic area. Also in the city center is a two-bedroom apartment, walk to everything, for $106,084. See: Whitemountain.ro.

Dubrovnik, Croatia – The Pearl of the Adriatic

Dubrovnik fairytale “credentials” are impeccable. It’s the stand in for the royal city of King’s Landing in the fantasy TV series Game of Thrones. It’s no surprise it was chosen. This seaside settlement’s 16th century stone walls still protect the Old Town, which is a UNESCO World Heritage site. The distinctive red tile roofs, stone buildings, and narrow limestone streets, with the aquamarine sea surrounding it on three sides are quite a sight.

Known as the Pearl of the Adriatic due its long time status as a leading Mediterranean port, the main industry these days is tourism. A two-bedroom apartment outside of town, with ocean views, is on sale for $124,805. Another two-bedroom apartment, recently renovated, lists for $198,439. See: Broker.hr and Libertasinzenjering.hr.

For those ready for a home without the stifling constraints of central heat and air and being surrounded by four walls, there are alternatives abroad. Head to the tropics and often you’ll find homes that are open; no walls, except sometimes the bedrooms. Local peoples have lived like this for generations, and many expats have caught on to the benefits like fresh air, sea breezes, and unimpeded views 24/7.

The Indonesian island of Bali has long captured the imagination. It has a mountainous, jungle interior. The beaches can be secluded or well trodden. The unique Balinese Hindu culture permeates daily life.

Seminyak is a popular upscale resort area on the southern end of the island, where sunsets are enjoyed over the Indian Ocean at spots like Petitenget Beach. The tropical climate lends itself to open air living. Indonesian laws make it difficult for a foreigner to own real estate. Most expats rent. A furnished two-bedroom villa walking distance to the beach, with its own pool, rents for $1,025 per month. In the same area is three-bedroom, also furnished and equipped with private pool, for $1,678 a month. See: Balilongtermrentals.com.

Nicaragua’s Costa Esmeralda (Emerald Coast), just north of the well-known seaside town of San Juan del Sur, has undergone many changes in recent years. Once a province of adventurous surfers seeking the next perfect wave (with many staying permanently after they found it), this stretch of Pacific coast now brings new residents of all types as infrastructure and services improve. Still, it’s a great place for a beach escape, whether it’s lounging on the sand, watching the water perched on a hillside, or out in the waves. The ideal open air one-bedroom home, featuring a two-story living area and two separate guest houses, is available now. It’s perched on a hillside overlooking Nacascolo Bay, with quick access to several area beaches. It’s on 1.74 acres (planted with banana, plantain, and citrus trees) and is available for $299,000. For $275,000 you can secure a four-bedroom home (including master suite with Jacuzzi) with ocean views. Walk to popular Playa Gigante village and surfing beaches. See: Property-nicaragua.com and Aurorabeachfront.com.