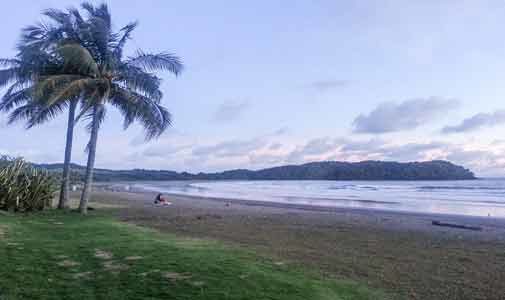 A soft, warm breeze comes from the Pacific Ocean as Chris and Bernice Wade embark on their afternoon walk, hand in hand. The cool azure waters gently caress the sand at Playa Arenal, in Pedasí, Panama, where the Wades retired a little over two years ago. This area, and others like it, have become part of their daily routine, for the “tranquility and the $1 beers,” Chris says.

“We chose Panama because of its proximity to the U.S., its infrastructure, and attractive cost of living,” says Bernice.

“Also,” Chris adds, “because of the laidback, unhurried, friendly vibe from the people, both Panamanians and expats. When we meet someone in the street, there is always a smile and a ‘Buenas!’ (short for ‘buenos días/tardes/noches’). Expats from all over make up about 10% of the population here.”

You’ll find Pedasí—a small, picturesque fishing village—on the Azuero Peninsula, about a five-hour drive southwest of Panama City. “When we arrived, the feeling of being in a comfortable, friendly place came over us within the hour,” Bernice says. “There is a little culture shock, but the expat community and the locals alike are very helpful.”

The area has dozens of beautiful beaches, including Arenal and Bull, both about a mile from town. Playa Venao, a top surfing beach, is about 25 minutes’ drive away. For a town with a population of only 2,500 or so, Pedasí has a surprising number of nice restaurants, run by their owners, where a “special occasion” dinner for two, including drinks, will cost about $45 to $50. That’s a luxury that Chris and Bernice can easily afford in their monthly budget.

These lovely dinners, which they enjoy once or twice a week, cap off a day generally spent on a leisurely breakfast on the patio before catching up online with family and friends. Afternoons are even less structured.

Chris and Bernice spend them lounging at the pool or on a “Pedasí drive-by.”

“That’s when you just stop at a friend’s house to visit, talk, or have a drink,” Chris explains. Or they may go to the large grocery store in Chitré, where they get the U.S. products that are part of their lifestyle here.

Chris and Bernice rent a spacious one-bedroom, one-bathroom, furnished house in a small development that is seven minutes from the town center. The well-kept grounds include a clubhouse and pool—all for just $850 a month, utilities included.

“Our rent is about mid-range for the area and it’s a really nice place,” Chris says. “We could be in town, with more noise and no air conditioning, for about half that, or on the beach for about double.”

While many expats retire abroad for a lower cost of living, it’s not the Wades’ priority. “It can be done, yes. But living a comfortable life with air conditioning, a mix of Panamanian and American foods, dining out, entertaining, taking day trips, our home and car, costs closer to $2,500 per month.” But they consider it well worth the cost. “The lifestyle we have here would cost anything up to four times more in a coastal area of the States,” Bernice admits. “And you wouldn’t necessarily be surrounded by some of the most interesting, caring people in the world!”

Some of their biggest savings are in labor and healthcare: “$3 to fix a flat and $35 to replace a radiator are examples,” says Bernice. Maid service is $15 to $20 a day, and they pay just $2 to $3 for a doctor’s visit, which includes a comprehensive consultation. If you need a blood test, it’s $7. An expat friend recently had a fractured hip seen to in the hospital in nearby Chitré.

“Three days later, the fracture was fully treated and the total cost was $280,” says Chris.

“Healthcare costs in the U.S. are a big driver for retiring abroad. With the exception of aspirin-type products, which are more expensive here, the cost of medications is about what the co-pay would be in the States, without the big insurance premiums,” says Bernice. “We both require regular medications, which run about $100 a month here, a savings of over $700 a month from what they would cost us in the States.”

So what’s not to like? Panama’s infrastructure is good, but it does not have the same quality and dependability as in the U.S. “Our electricity goes off frequently.

And for some odd reason, when it does, the internet quality degrades after the electric service is restored,” Chris says.

Even so, when you’re relaxed and live in a beautiful place, even these petty frustrations can be an opportunity. Why worry about a power outage when it’s an excuse for a party? “A few months ago, we threw a pool party for our friends, since none of us had power. We cooked on outside grills, swam, drank, laughed, and had an amazing day!” says Bernice. “The people here are amazing, and I believe we all share the same sense of adventure that brought us to this area.”

Recently, a “beautify Pedasí” program had volunteers painting houses and other structures. Many local artists contributed, and during the first phase, “40 houses, seven murals, and scores of telephone poles were painted,” says Chris. “I volunteered several times. There is a real sense of pride in seeing a part of town that you helped beautify.”

“We’re thankful every day for our newfound lifestyle here,” Bernice says. Would they do it again? “In a heartbeat,” says Chris. “People work 50 weeks a year to spend a two-week vacation in the Pedasí area. We live here—enough said!”