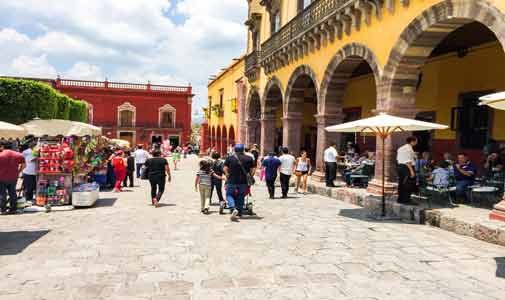 Full of art and music, San Miguel de Allende has been one of International Living’s favorite retirement locales since the 1980s. Despite its popularity, it’s still possible to live here affordably.©Jason Holland

It’s about 75 F and sunny…a slight breeze rustles the potted palm next to me. I’m on my rooftop terrace. I spend a lot of time up here to take advantage of beautiful weather and the views. My home is on a hillside, which isn’t always fun when walking back from the market with heavy bags. But it’s worth it to get a panoramic view of San Miguel de Allende’s historic centro, including the famed pink stone, Gothic-style church La Parroquia. The evenings, with views of the sinking sun over distant mountains, are always picture-worthy.

The accolades the mainstream media have lavished on San Miguel have made it popular lately. However, it’s still affordable if you know where to go.

Six thousand two hundred feet up in the mountains of central Mexico, San Miguel is a well-known expat haven—and has been for decades. Of the town’s population of around 70,000, it’s estimated about 10% are expats, mainly from the U.S. and Canada, with some Europeans, as well.

Many choose to live in and around the historic centro, which has been continuously inhabited since the city’s founding in 1542 as an outpost of the Spanish empire. The heart of town is full of grand colonial structures, including civic buildings and churches.

Some of them have been repurposed as art galleries, shops, and restaurants. Homes in the centro are mostly renovated colonial buildings. In fact, regulations surrounding its status as a UNESCO World Heritage Site require
that buildings in the heart of centro be preserved, with no radical changes to the exterior. It’s like living in history.

Go just outside the official centro to colonias (neighborhoods) like San Antonio, Atascadero, Independencia, San Rafael, and Guadalupe, and you’ll often find a mix of contemporary or colonial style in keeping with the surrounding architecture.

“It’s relatively quiet. There are lots of vendors. Kids running to the tienda and back. Families hang out outside. It’s a mix of expats and Mexican. It’s not dense, which I like. Close in but not in town. And it’s on a rise, with a gentle slope,” explains Mark. “We have a 360-degree view. We can see the Parraquia and the fireworks.”

San Miguel’s popularity among part-time and full-time foreign residents, as well as middle- and upper-class Mexicans, has also pushed development to the outskirts of town. There you’ll find new, modern construction like town homes and condos in gated communities that wouldn’t be out of place in the U.S., as well as communities with large lots…even country homes. In exchange for not being in the heart of the action, you often pay less than you would for a home in the town center.

There are pros and cons to both areas. But everyone living in San Miguel can enjoy its many benefits.

The climate is temperate year-round (60s F and 70s F during the day, cooling off at night into the 50s F and 40s F). There are modern services, including good healthcare, great shopping, high-speed internet, and reliable cell service. It’s not the cheapest destination in Mexico, but it still offers a lower cost of living than north of the border; a retired couple can live well on $2,500 a month, or even less.

And you can’t forget the traditional Mexican religious and civic celebrations that seem to erupt every few days. My favorite is La Alborada, which honors the town’s patron saint and namesake, the Archangel Michael, at the end of September. There is a fireworks battle around 4 a.m., as well as processions and parades the whole weekend.

Perhaps most famously, San Miguel has a vibrant and innovative arts scene that you can take part in as a spectator or active artist.

Veterans from World War II discovered that the GI Bill could be used to attend art school in the city. It was a favorite haunt of the Beat Generation, too.

One of my favorite parts of living in the centro is that I can walk to anything, whether it’s to the Ignacio Ramírez market for ingredients for dinner (I also love to pick up figs and apricots—a pound for $2), to meet with a friend for coffee, pick up medication at the pharmacy, see my dentist, or enjoy an evening at a venue like Johnny’s Piano Bar.

Slick cobblestones on rainy days do claim their share of victims. But in general, I enjoy the walkable aspect of this small city. And I’ve gotten in great shape walking up the many hills in town. The shortness of breath due to the elevation has also lessened steadily since my arrival.

It’s truly a pleasure to step out your door and be in the action. This is a thriving city, and there’s so much to see. There are restaurants for every cuisine. My favorite food is the street-cart al pastor (marinated pork) tacos for 10 pesos each just down the way from my house.

Art galleries, restaurants, shops, artisan markets…if you live in centro, it’s all at your fingertips.

“For the size of the town, it’s amazing what’s going on here as far as arts and culture,” says Mark. “There’s Media Luna—a local band I like. There’s a lot of nice visual art. And the food is great. It’s really cosmopolitan.”

In the heart of centro, real estate can be pricey—a byproduct of its popularity—especially if you go for luxury. But you can still find deals in the up-and-coming neighborhoods, where you’re a 10- to 15-minute walk to the action.

Another San Antonio home, three bedrooms with views from the rooftop terrace, is available for $299,000. It comes fully furnished.

There are drawbacks to living in centro. This is a real working city, so you get everything that comes with that. If you have a car, parking can be an issue on the narrow streets. Many homes don’t have garages. Some streets won’t accommodate larger trucks or SUVs at all.

You may also have to deal with street noise: barking dogs, roosters (yes, even in the city), music, delivery vehicles, and fireworks. As a centro resident, I’ll mention that after a while you really don’t notice the noise as much. But if you’re sensitive to noise, it may be worth looking for a quieter neighborhood.

For some, the urban energy of centro is something they prefer to visit rather than live in. You’ll find them in developments, many of them constructed in the last few years, on the outskirts of town.

Several are being built or expanded right now.

Zélie Pollon, 48, from New Mexico, lived in centro for four months last year. Since returning to San Miguel, she’s switched to a modern development in one of the gated communities on the outskirts.

“Weekends and holidays are very full. Most of the owners are from Mexico City. So it can get a little lonely during the week.

It’s very safe. There are security cameras and 24-hour guards. We have a little backyard for our dogs and a trampoline. And there are swimming pools, which is nice in the hot months,” says Zélie, who says her son Aiden has also found the open space and friends in the neighborhood to be a plus.

“There are trade-offs. I’m outside of town, so I have a car for convenience’s sake. It’s not as easy to hop into town to have dinner with friends. I have to plan it.”

These are quiet neighborhoods, purely residential, with amenities like club houses, swimming pools, and tennis courts.

Sure, there can be a sense of “missing out” on what’s happening downtown, because it takes a bit more effort to get there. But all of San Miguel is actually quite small, so it’s not really that far. It may be a 20-minute walk, or you may have to wait for the bus, but they do run regularly. It’s always good to have the number of a taxi driver handy when you need to make a quick trip. And you can always drive into town, although I suggest parking in a lot on the edge of centro and then walking the rest of the way.

Being on the outskirts makes it easier to access services like the larger grocery stores and hospitals, which also tend to be on the edge of town. You often have 24-hour security in newer communities, too, which makes it easier to lock and leave.

One interesting neighborhood, Los Frailes, is about a 10-minute drive out of town. It features large homes on big lots, often a compound style with tall walls and gates for privacy. One four-bedroom home on a cul-de-sac with large patio and yard is listed at $203,000. Also in the neighborhood is a two-bedroom, 3,325-square-foot home with garden and guest casita (or art studio) for $325,000.

If you’re coming to San Miguel de Allende for an exploratory trip—or even just a vacation—you’ll soon see that there are expats all over town. And there are some popular hangouts where you can go to meet people.

You’ve never seen a Starbucks like the one in a restored colonial building, complete with shaded, plant-filled courtyard, on the northwest corner of the Jardín. Good WiFi, too. (Calle Canal #3.)

Mexican and expat artists are featured. And there are cafés and restaurants, as well. It’s the site of many special events. You can take classes from some of the artists, too.

The expat-founded Biblioteca Pública (Bibliotecasma.com) is a library, bookshop, café, movie theater, and performing arts space that has been around for more than 50 years. There’s always something going on.