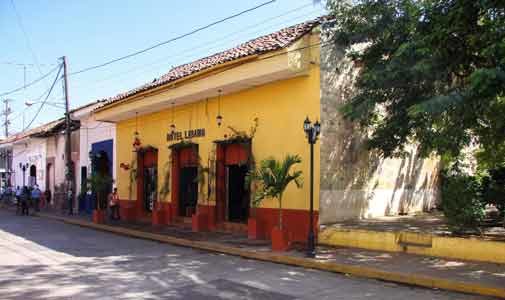 Close to the northern Pacific coast of Nicaragua, León is a great place to do business.©Eoin Bassett

“It’s nice to sit in the sun and listen to the roar of the ocean, watch the surfers and the waves, maybe have a cold beer,” Joel Benitez says with a smile. “Two beers here at the beach is about $3, compared to $8 at a bar back in Canada. Am I sitting here dreaming about the ice and snow I left behind? Not really!” he laughs.

Living in Edmonton, Alberta, Joel had all the stress he wanted and was ready for a different way of life. “Like everyone,” Joel says, “I was chasing the dream, not living it.”

Joel worked in real estate, building homes in Edmonton, Canada’s fastest-growing city at the time. “The stress was incredible. There was so much red tape you couldn’t cut through it with a chainsaw. There were people micromanaging new construction who had never been on a job site.

“Then there was the weather. It was below freezing for six months a year. The traffic was terrible; there were over a million people crammed into a space smaller than León, and everyone had a car or truck. You drove hunched over, lurching from ice patch to ice patch.

“Enough was enough. I had to find a better way of life.” Joel and his wife Dinora began exploring various locations, with the idea of buying a successful existing business. Joel had accumulated some capital as his retirement nest egg; he was willing to use it to start over.

While checking out opportunities in Nicaragua, they came across an advertisement for a breakfast restaurant for sale in León.

León is a cosmopolitan city about 48 miles from the capital, Managua. It has a vibrant theater and several museums. The downtown core around the cathedral is well maintained and always busy. León is a university town, so it brings student visitors from around the world. It’s 20 minutes from the beach and accessible to the northern mountains, and to the coffee growing areas, volcanoes, and historical sites.

On a visit to the city, Joel and Dinora stopped by a local restaurant, El Desayunazo, for breakfast and found a thriving, busy enterprise.

“When we bought the restaurant, we kept the same manager and staff,” Joel says. “They dealt with operational details, which allowed me to look at the bigger picture.” He adds, “Now, as well as breakfast, we serve both lunch and dinner.

“I kept the breakfast menu pretty much as it was,” Joel says. “Both locals and tourists eat breakfast here, and the locals know what they like.” The new lunch and dinner menu includes dishes previously not available, such as steak and chicken, but prepared Nica-style. “You won’t find filet mignon here, but you’ll find a decent piece of beef with a nice sauce and maybe gallo pinto [typical Nicaraguan rice and beans] and salad.”

Joel does the market shopping himself, walking to the Mercado Central (central market) by the cathedral three times a week. There he chats with the vendors, checks out the produce, fills up his bags, and walks back the few blocks to the restaurant.

Life for Joel is very pleasant these days.

He says he works four or five hours a day now and has plenty of time to enjoy the finer things in life. “A couple of times a week we go to Poneloya and spend the afternoon at the beach,” he says. Poneloya is 20 minutes away by car from León, on the Pacific. It’s quiet, rustic, and frequented mainly by locals.

“We go to the movies for $3 each, and these are new movies. Then maybe out for dinner and a bottle of wine. Total expense is, at most, $40. In Edmonton, that’s a $150 night!” And nights out are not all that Joel has found to be affordable in León. “We found a really nice three-bedroom house, with a bathroom, living and dining room, kitchen, and storage room,” Joel says. “As well as the rent, we have air conditioning, electricity and gas, cable, internet, and phone for the same cost as the $400 per month we were paying for utilities in Alberta. It’s two blocks away from the restaurant, so I can walk to work every day.”

Of his new life in León, Joel says, “I’m looking forward to exploring a lot more of the city and the countryside soon. We bought a little car to do some road trips. It’s economical to use and insurance is a lot cheaper. Gas is about the same.

“I’m also thinking about taking up some hobbies that I’ve never had time for before, and so is Dinora. We do everything together, but there’s room for individual development, as well,” he says. “For me, I’ve always wanted to play the guitar, so maybe I’ll take lessons. I don’t plan on volcano boarding, but maybe photography would be interesting. I have time now.”

Editor’s Note: Whether you want to build your dream home or just rent for a while, in Nicaragua, you’ll find the lowest cost of living in Central America, meaning you can enjoy a high quality of lifestyle and affordable luxuries on even a modest income. Expat couples say they can easily and comfortably live on anywhere from $1,000 to $2,000 a month, including rent. Discover the best places to live in Nicaragua and everything you’ll need to get there in our special resource Escape to Nicaragua: Everything Your Need to Retire Better, Invest Well, and Enjoy the Good Life For Less.