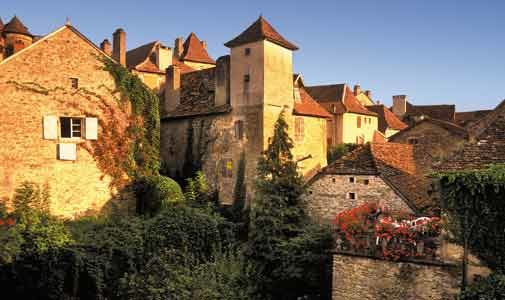 All across France in small villages and historic towns you’ll ﬁnd astonishing value in real estate.©iStock.com/KodachRome25

Spotting bargains on the French property scene has become something of a hobby of mine.

It’s easy and fun. And, even after three years of living here, I still marvel at the incredible pieces of history you can buy at knock-down prices and turn into your European base.

I recently spotted an old village house—in liveable shape—for sale for a mere $15,440.

In the tiny village of Liglet in the Poitou-Charentes region, not too far from where my wife Lorraine and I bought a home, I came across a solid, one-bedroom, habitable house that was once the village grocer’s.

The Poitou-Charentes is popular with expat buyers because of the mild climate.

What does $15,440 get you? It has three good-sized rooms, an entrance hall, and an old-fashioned toilet. There’s room in the attic for two more bedrooms, one ensuite, plus a separate family bathroom. Water and electricity are connected, and the property is connected to the municipal sewer system, so it would not be difficult to connect up once a bathroom and toilet have been installed.

At the front of the cottage is a triangular garden/courtyard opposite plenty of parking, around a pretty fenced village park with benches, children’s play corner, and a pétanque court beneath the shade of plane trees.

The cottage has two entrances. The first leads into the kitchen, with its original cupboards, tiled floor, and white sink. Then on through to the living room, with the second entrance door. There are original terracotta floor tiles and a fireplace. The third room, once used as the bedroom, is similar to the sitting room; it also has original tiled floors and exposed beams.

The village has a little grocer’s shop for fresh bread. Only a 10-minute drive away are two villages with all amenities, including restaurants, post offices, a bank, and mini markets. Twenty minutes’ drive away are the thriving old Roman towns of Montmorillon and Le Dorat.

The house needs a new kitchen, a new bathroom, and connections to services, plus redecorating. I figure if you were prepared to do most of the work yourself and budgeted another $8,000 on top of the $15,440 for things like kitchen cabinets and bathroom fittings, electricians, and plumbers, you’d have a lovely home.

The Poitou-Charentes region may not, of course, be for you. In France, you can choose any climate that suits your lifestyle. You can choose between apartment living and houses with gardens, and between town and country.

If you are into winter sports, somewhere along the Swiss border may suit. For beaches and warmer weather, head south to the Mediterranean coast. Maybe the wine country near Bordeaux or the wide-open spaces of Normandy are for you.

As in all countries, the more popular a region of France is, the more expensive its real estate will be. So just take plenty of time making up your mind on where to live in France.

When we first arrived here, my wife Lorraine and I spent a couple of months touring around in an RV with Scooter, our Australian Dalmatian. We felt it was important to get the feel of a locality before making a decision on where to live.

Some people may be attracted to places with a large expat population, such as the stunning Dordogne. (It’s sometime referred to as “Dordogneshire,” because of the large number of British living there.)

Others may want to be more integrated with the French and choose a destination where they can live like locals.

Lorraine and I settled in the Limousin region, where we bought a nine-bedroom maison de maître (master’s mansion), with wood paneling, parquet floors, and a carved staircase serving three stories.

We looked only at houses that we could move straight into and that did not require substantial renovation—although some were old and required some cosmetic work inside.

Limousin is a beautiful and rural part of France. We had always wanted to live in a big old house, and ours is in the small town of Bellac, about halfway between the ancient cities of Poitiers and Limoges.

The property cost about $265,000 at current exchange rates and included two acres of park-like gardens leading down
to fields and a spectacular view across the Vincou river valley to the Blond Mountains in the distance.

It gives us a rural setting in a town that has all the services we could want. These include huge supermarkets, a hardware store, a hospital, doctors, dentists, and a liberal sprinkling of cafés and restaurants. Limoges airport, with regular flights to a variety of destinations, is only an hour’s drive away.

But you can spend a lot less than we did and still have a wide variety of options to choose from. Take a budget of around $100,000…

About 15 minutes from Bellac is a hamlet called Meziéres-sur-Issoire, which has a shop and café. (By the way, Bellac has a railway station with connections to destinations all over Europe.)

I saw a house in this hamlet listed at €98,520 ($121,151), and you get not only the home but also an attached gite for some income generation. A gite is a self-contained vacation home you can rent out. You get a two-bedroom renovated house, a two-bedroom gite—both over two floors—and an attached barn with planning approval for conversion to living. See: French-Property.com.

Located in a pretty village near a regional park, this house has everything you want, including an open fireplace and a private garden. It has easy access to hiking paths and a nearby lake.

If you fancy living near the Mediterranean, without spending the big bucks you need to be in places like Provence, I discovered a €93,744 ($115,305) property that may be the place for you. This is a two-bedroom village house near the town of Béziers, in the Languedoc-Roussillon region. It has a huge terrace with spectacular country views and comes renovated and fully furnished.

Béziers is about 30 minutes from the coast and only a three-hour drive from Barcelona.

If the snow fields of the French Alps, with great skiing and snowboarding, are a big attraction, there’s a house listed near Breuvannes-en-Bassigny in the Champagne-Ardenne region. It’s a former small farm in the village of Nijon, which was entirely renovated eight years ago. There is a front garden (courtyard) and a rear garden with a spacious terrace offering a beautiful view over the fields and forests. Switzerland is only a couple of hours’ drive away, so don’t forget your snow chains and skis.

Hundreds of properties are for sale in this price range. Two websites you can browse to your heart’s content are French-property.com and Frenchpropertylinks.com.

France also has an online free advertising site; it can be great for the real bargains, but all listings are in French. Try Leboncoin.fr to get some ideas.

Bargains come at all price points, and if you want to live like a lord in your own castle, try a château. There’s one for sale not too far from us near the town of Chalus, where Richard the Lionheart was mortally wounded. Built in 1179 and now fully renovated to an exceptional standard, this fairytale property has 29 bedrooms, a grand banqueting hall, and its own licensed tavern. The château is complete, with a moat and portcullis, and the estate consists of nearly 407 acres, with several houses, barns, four lakes, and various water wells. It’s $25.5 million.

A word of warning: Do not buy anything before seeing it in person and having a builder look at it. We’ve heard many stories about people falling in love with a house online, only to find it requires substantial work. French houses are usually very old. And ask about the fosse septique (septic tank)—does it comply with local regulations? If not, you will need to make it compliant within a year.

Lorraine and I fell in love with an old house near Confolens in the Charentes region. We’d seen it online, and when we saw it in person, it was everything we wanted. A walled garden, a gîte, a spectacular vaulted lounge room with a massive open fire, and a huge circular pigeonnier (dovecote).

We paid for an architect/builder to visit the house with us, and our dream came crashing down. Part of the roof would have to be replaced, the water supply would need replacing, and the septic tank was ancient and needed replacing (and was next to the well, which provided drinking water). The list went on and on.

We eventually decided to look for another house.

While France has no restrictions on foreign ownership, there are lots of regulations surrounding the purchase of a home.

Every sale and purchase is handled by a notaire (a specialized lawyer who handles real estate transactions), who is governed by a series of regulations and who often represents both buyer and seller.

The notaire fees are fixed, and you will get a price that includes everything, including the French equivalent of stamp tax. The fees are based on a percentage of the property price. The purchaser pays the notaire fees for both parties.

The notaire makes sure that your purchase is smooth and that there aren’t any hidden surprises. This process takes about three months, so you’ll need to be patient. During the purchase period, the house owner will have a series of diagnostics done on the house, at his own cost. An energy efficiency analysis will have already been done and is usually shown in the house listing. Make sure your large house will not cost an arm and a leg to heat! Further surveys for electrical safety, lead, asbestos, and the like need to be done by an independent body. The reports will form part of your purchase contract.

Once everyone is satisfied that all is in order, you sign a document committing you to buy, and you pay a deposit. There is a cooling-off period of 10 days, during which you can change your mind for any reason. But once the 10 days are up, you are committed to buy. There is no cooling-off period for the seller. Once the document is signed, the seller is committed to sell.

The other thing that is important in France is that, if you want to do structural work on a property, you need permission from the local council (Mairie), which is all-powerful. Check with the Mairie before undertaking any major works. There are also regulations governing some old buildings of historical interest, but your Mairie will guide you.