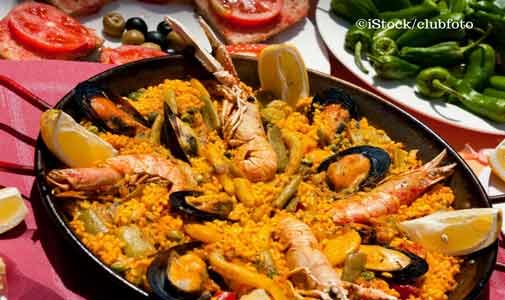 Ibiza, Spain—one of the four Balearic Islands in the Spanish Mediterranean—is better known around the world as a hangout for jetsetters and celebrities than for its cuisine. While I worked as an English-language assistant on the island, I found that the real Ibiza is much more interesting than the version portrayed in gossip magazines. Instead of frequenting the warehouses of mega-clubs, I spent my weekends appreciating the island’s beauty while hiking along off-the-beaten-path trails…and, of course, eating all the artisanal local products I could.

During the high season (May to October), tourists’ cars overwhelm the narrow roads and party casualties crowd the hospitals. For the rest of the year, though, Ibiza is home to Ibicencos (keep an ear out for their Catalan dialect of the same name) and to expats from Europe and North America.

Just 93 miles off the coast of Spain, Ibiza is a perfect weekend destination for expats living on the mainland. And at only 220 square miles, travel from one end of the island to the other is possible in about an hour. From where I lived in a country home near San Rafael, the midway point between Ibiza Town and San Antonio, I could easily drive to any point on the island and have a long, leisurely weekend lunch with friends and their families.

Much of Ibiza’s best food is made in locals’ homes, but there are still many eateries to provide you with authentic, mouth-watering dishes. Forget the burgers, pizza, and tapas (although those are great). Instead, opt for the fresh-caught fish, rice, and cheesecake.

Rent a car or a moped and ride along the two-lane inland country roads, winding cliff-side highways, and thorough-fares down to the water. Along the way, you will experience the best dishes that Ibiza’s land and sea offer, while you also get a taste of its fascinating culture.

Breakfast Like a Spaniard at Bar Costa in Santa Gertrudis

I loved starting my morning in the island’s rustic inland landscape of almond and fig trees. There’s nothing so comforting in the village of Santa Gertrudis as sitting next to Bar Costa’s fireplace on a chilly morning. When it was warm, I loved sitting at one of its outside tables across from the church plaza as I people-watched or read the newspaper. Once a place for farmers to go when they couldn’t work, Costa’s has one of the most famous—and most affordable—breakfasts on the island. Locals love the bocadillos, or baguette-style sandwiches, made with tomato purée and serrano ham. My favorite choice was the local artisanal sausage, sobrasada. Add a café con leche for around $6. Don’t fill up too much, because the big meal comes in the afternoon.

Sample the Best Artisanal Products From the Island

Before heading to lunch, drive north to the quaint town of Sant Joan. Ibiza is famous for its “hippy markets,” and Sant Joan has one of the best. Stop in Sant Joan to wander, or if you’re there on a Sunday in the off season or Friday in high season, browse the artisans’ market in the main plaza. Vendors bring jewelry and art but also farm-to-fork products like sobrasada, fresh fruits and vegetables, dried local fruits like figs and almonds, and my favorite, the must-try hierbas ibicencas—a homegrown liquor flavored with various herbs such as thyme, eucalyptus, rose-mary, and fennel. You may even hear some live music.

Fresh-Caught Fish by the Sea in Cala Mastella

Head northwest to the tucked-away beach of Cala Mastella, just north of Santa Eulalia. Sea fish of various types are a quintessential Ibizan staple found at most restaurants. But there’s nothing quite like chowing down at El Bigote, where I basked in the sun, listened to the water below me, and watched the family chefs make an industrial-sized batch of bullit de peix, the only item on the menu.

This Ibizan fish stew is made from fresh-caught fish, such as anglerfish or monkfish, megrim or grouper. The chef boils the fish in an aromatic mix of vegetables, garlic, and potatoes, then uses the excess broth to prepare rice. Guests snack on aioli, olives, and pan payés—Ibizan bread—until it’s ready. Order a cup of fisherman’s coffee called café caleta, with hints of orange and brandy. Lunches are around $24 a person and are at 2:30 p.m. Reservations are a must (+34 (650) 79-76 33).

San Antonio’s party-hub, Café de Mambo, loves to boast that it has the best sunset view on the island, but I disagree. Head southwest from Cala Mastella to Cala d’Hort, a less-frequented area with a spectacular view of the mystic magnetic rock, Es Vedra. There the restaurant Es Boldado overlooks the cove, and if you’re in time for a sunset, it’s one of the most breath-taking views you’ll see on the island.

Here people come for the fish and paella, Spain’s famous rice and seafood dish meant for sharing. But if you’re not hungry after the large lunch, don’t fear. I came to Es Boldado for the sunset and for the flaó, Ibiza’s cheesecake doused with sprinkled sugar and hierbabuena (spear-mint), for around $8.