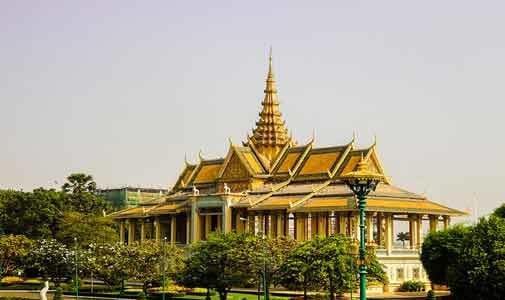 The temples spread over 247 acres, the biggest religious monument on earth, and one of the wonders of the ancient world. ©Barbara Ross

Derek Howell had long pondered options for his retirement and couldn’t help feeling that he’d missed out by not traveling overseas. At first he dismissed his globetrotting urges as options only for the wealthy…until he began searching for flights around the world.

“I had a list of dream destinations and decided to check how much it would cost to buy a ticket. London, Japan, and Beijing weren’t too expensive to get to, but I realized how costly these places were to live in.

So I refocused on the Far East and saw a great deal on a flight to Phnom Penh, Cambodia.

“Now, every morning I wake at sunrise, looking forward to another new day soaking up the exotic sights and sounds of the kingdom of Cambodia,” says Derek.

Although Derek lives in the capital city, Phnom Penh, he makes the most of Cambodia’s low cost of living: He spends half his time visiting historic and cultural places all over the country.

If there’s an ancient temple, aging French colonial architecture, traditional Khmer artisans, or some provincial cuisine that piques his interest, he gets on the first bus and heads off on another adventure.

“A lot of friends back in the States have asked me why I live in a country they haven’t even heard of. I keep telling them that’s the whole point of traveling and living overseas: to see something unexpected and experience a totally different culture.

“What was I going to do with my retirement, anyway? Cost of living is expensive in California, and I spent too long working my butt off, with not a lot in return. I lived in America my whole life, so I thought to myself, ‘I am going to try something new.’

And boy, did I ever!

“I had read a travel article about the country and found it fascinating. I don’t know why, but I decided to buy that ticket. It was like saying goodbye to trashy TV shows and junk food dinners. I was going to the kingdom of Cambodia to see some spectacular things. I figured if I liked it, I’d stay awhile. And, well, that was two years ago.”

As it happened, Derek’s flight landed just before the start of the annual Water Festival in Phnom Penh, when millions of people descend on the capital city to watch a national boat-racing contest. Dating back thousands of years, this traditional event is overseen by the King of Cambodia.

“It was like I walked into a parallel world. The city was full of people, with huge crowds gathering to watch the boat races. I did the same and ended up sitting by a friendly Cambodian family. They spoke enough English to get me interested in the cultural aspects behind the boat racing and told me I really had to visit Angkor Wat, in Siem Reap.

“It was already on my list, but once I started reading more, I was overwhelmed by the size and history of Angkor Wat. I got on a bus, expecting to spend only a week visiting Siem Reap before coming back to Phnom Penh. But once I saw the temples of Angkor, it was like nothing I’d ever encountered before. It is actually a city of temples spread over 247 acres, the biggest religious monument on earth, and one of the wonders of the ancient world.”

Derek decided to make Phnom Penh his home base, due to its excellent nationwide transportation options. He rents a one-bedroom, one-bathroom apartment with a Western kitchen, living room, and balcony for $355 a month.

Rent is his single biggest expense, followed by dining out at local restaurants. He may spend as little as $4 for a plate of meat, rice, and vegetables, plus a glass of fresh draft beer.

“I’ve still not been back to the States. I’m too busy enjoying my retirement, surrounded by ancient temples and a living history of artisans, sculptors, painters, and traditional musicians. Give me culture over commercialism every time!”