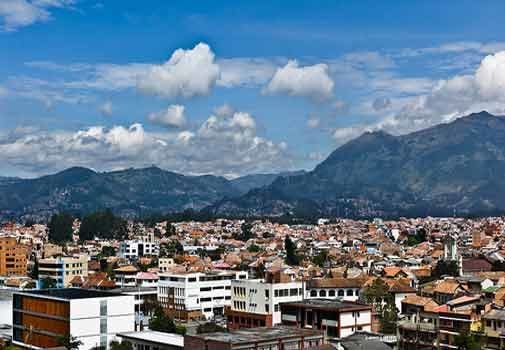 Parades, parties, and concerts, often informal and spontaneous, are a way of life in Ecuador. ©HugoGhiara

What I like most about my new life as an expat is that it has enabled me to reconnect with what is truly important. It should come as no surprise to anyone that what turns out to be important isn’t the big houses, the new cars, or all the possessions I spent so much time working to accumulate throughout my professional career.

Instead, I’ve found that the relationships I’ve formed with other people are the most important thing. How did I ever lose touch with that? Was it all due to the rat race I left behind?

In the early part of our time together, my wife and I moved frequently throughout the U.S. Between 1985 and 2014 we bought 10 different homes in five different states. We also spent three and a half years living in an RV, but only one of which was spent doing the traveling we both love, the rest was spent parked up in a Florida trailer park.

While we always enjoyed discovering new places and meeting new people, much of our first 21 years together was spent pursuing careers. Half of the hours in each week were consumed by work. It was financially rewarding and emotionally disheartening.

In 2010, five years after my retirement, my wife and I took a hard look at everything. We were happy together but dissatisfied with what we saw ahead for us. The log-sided cabin we purchased in the mountains of Georgia in 2008 had lost half its value in the real estate recession.

Health issues were eroding our pocket-books and our activities. We were losing faith in the future we had hoped to live. We started searching for options.

After reading International Living and numerous other sources of information, we narrowed down our choices and made an exploratory visit to Ecuador. We liked what we saw and decided to try life as expats.

First, though, was the task of uprooting our lives. We put our house on the market. Four long years later we had received two offers, the second one even lower than the first. In late 2014 we made the decision not to let the diminished value stop us from moving forward, and we sold it at a $150,000 loss. We also sold our cars, all our furniture, and most of our worldly possessions.

We arrived in Cuenca, Ecuador, in January 2015. While excited, we were apprehensive, as well. This was uncharted territory for both of us. Not only were we embarking on a different life, we were doing it in a different country where neither of us spoke the language.

Now, three years later and with the advantage of hindsight, we realize that, other than getting married, it was the best decision we ever made. Our lives have changed completely. We no longer spend the majority of our income on house, car, and medical payments. We don’t dread getting up in the morning to see what problems wait ahead. For the first time in a long time, we look forward to each new day and what it will bring.

While the reduced cost of living—which leaves us with money to travel—is welcome, it isn’t the most important part of our new lives. It’s not even close.

Instead, it’s the meaningful relationships we’ve developed with expats and Ecuadorians alike. Much of that results from the relaxed pace of life that Latin America is famous for.

People take the time to connect and get to know one another. It’s common to sit and talk with someone, even someone we are meeting for the first time, over a breakfast or lunch that can last two hours or more. When we walk down the street, it’s not unusual to stop and spend 15 to 20 minutes chatting with someone we know, or even with someone we’ve just met while walking.

People are happy here. Cuencanos, despite the fact they aren’t wealthy, engage in a constant celebration of life. Parades, parties, and concerts, often informal and spontaneous, are a way of life in Ecuador. In the last couple of months, we’ve had dinner with people a number of times. More than half our visits have been with Ecuadorian couples.

Even when the dinners involve expats, it may be with someone from Venezuela or another non-U.S. country. We usually sit and talk for two to three hours.

Since arriving here I’ve written three novels. I’ve found others sharing the same interest, and we’ve formed a foundation that unites writers from North America with their Latin American counterparts. Our third writers’ conference will be held this year. The slower pace of life allows me to appreciate culture, rather than missing it because I was so busy. I made more money before, but I’m richer now in so many other ways.

Is our new life perfect? Far from it. We’re still struggling with our Spanish.

Because of our ages, we have some health issues, although our constant walking and the excellent and affordable health-care here help a lot with that.

But all in all, we’re the happiest we’ve ever been. Any shortcomings in our new expat life have been more than offset by the richness of the friendships we’ve formed. Friendships with other expats and Ecuadorians alike. And the place has changed us, too. Now we’re the people who take the time to talk to new arrivals in town.

Recently we were leaving our apartment to go grocery shopping. A couple we had never met before held the elevator for us. They were prospective expats from Texas, here to explore Cuenca for a month. We ended up spending the next hour with them, even going so far as to guide them to the nearest place to obtain a bus pass. I’m certain we’ll be seeing them again.