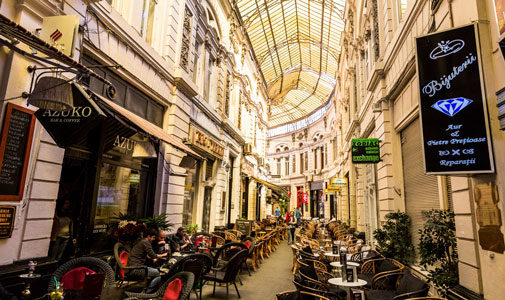 Known as the “Paris of the East” in the early 1900s for its art nouveau architecture and glamorous high life, the Romanian capital, Bucharest, went through dramatic changes during the dark decades of communist rule. Those days are long gone now, and today’s Bucharest is one of Europe’s most underrated capitals.

I spent seven months there recently and found a city filled with fascinating contrasts and still somewhat uncertain about its identity. City planners in the late 19th century commissioned French architects to create a city to rival the French capital. Much of their work was destroyed during communist rule, but you can still find vestiges of their elegant vision. Ornate churches hide behind bleak communist-era buildings. Historic mansions lie between modern chic boutiques and sleek art galleries. All without the overwhelming crowds of tourists you’ll find in many European cities—or the high price tags.

Though there are many flights to and from major international cities and many locals speak good English, this Eastern European capital remains overlooked. It’s a destination for adventurous folks, so if you have a bit of the pioneer in you, this could be a spot to check out.

American and Canadian citizens do not need an entry visa to visit Romania for stays up to 90 days, and airfare from the U.S. to Bucharest is relatively inexpensive with such airlines as AirBerlin, LOT, and Lufthansa offering 11- to 12-hour flights with one stopover for $500-600. Romania is outside of the Schengen Zone, meaning that a visit can temporarily “stop the clock” on your 90-day European Union stay.

Bucharest is a very green city, with many parks scattered throughout. Park Herastrau, laid out on 462 acres around a natural lake, is everyone’s favorite, and it gets busy during warm summer months.

Locals go to Herastrau to cycle, run, fish, or have a drink in one of the upmarket bars on the lakeshore.

The nearby Village Museum (Soseaua Kiseleff 28-30) was my favorite for chilling out in summer or enjoying sunny days during the winter months. Three hundred traditional wooden houses, windmills, and churches have been brought here from different corners of Romania; the oldest peasants’ dwelling dates back to the 17th century. Tickets cost only $2.50; see: Muzeul-satului.ro/en.

Dictator Nicolae Ceausescu stripped Bucharest of its former glamor during his 34-year reign, turning it into his megalomaniacal playground. A reminder of the communist regime is the Palace of Parliament, the world’s largest civilian building.

You can book an hour-long tour to get a glimpse of the kitschy splendor, with tons of marble and gold, and admire the best view of the city from the rooftop. Bring your passport for security procedures on entering, as the building now houses the Romanian parliament. The full tour costs $11 and must be booked a few days in advance at Cic.cdep.ro/en.

It is easy to miss the old small churches in Bucharest, as many were deliberately hidden during the communist era, when office and apartment blocks were built around them. Not the 16th-century Mihai Vodá Church (5 Strada Sapientei), though.

In 1985 this one was moved 935 feet east, in one piece, to make space for new buildings. I like trying to imagine how locals moved this building on rails to save it from destruction.

The beautiful avenue Soseaua Kiseleff is home to spectacular art nouveau and neo-Romanian Renaissance villas, some restored, others crumbling. The busy Calea Victorei road is another treasure trove of old splendor: Walking along its two-mile length is like taking a history lesson on the city’s turbulent past. Built more than three centuries ago, it is lined with old and new shops, palaces, churches, and hotels.

As a foodie, I found Bucharest full of delectable surprises. Restaurant Hanu’ Berarilor (see: Hanuberarilor.ro/en), set in a beautiful, early 20th-century interior, has a menu in English and serves excellent sarmale (cabbage rolls stuffed with spiced minced pork), mamaliga(Cornmeal polenta), and good beer brewed in-house, all for just a few dollars. At the centrally located restaurant Lacrimi Si Sfinti (see: Lacrimisisfinti.com/en), I enjoyed a great mix of traditional and modern Romanian cuisine. Try the sumptuous goose and veal meatballs for only $7.

The best areas to stay in Bucharest are around the Unirii Square and Old Town.

Here you will be only a short stroll away from restaurants, bars, and the city’s main landmarks. One gracious, but affordable, option is the 5-star Grand Hotel Continental, located in the heart of the city. It offers modern day comforts and historic opulent décor starting from $100 for a double room. (See: Continentalhotels.ro).

On weekends, one of my favorite stops was a small local food market on Bulevardul Marasti. Here you can gorge on papanasi‚ (Romanian donuts with sweet cheese and jam) for 50 cents, and gobble down a bean soup with freshly baked bread for less than $2. Watch as women clad in traditional attire of colorful headscarves, white hand-embroidered blouses, and aprons over puffy skirts bake bread in a wood oven.

All without a single tourist in sight.