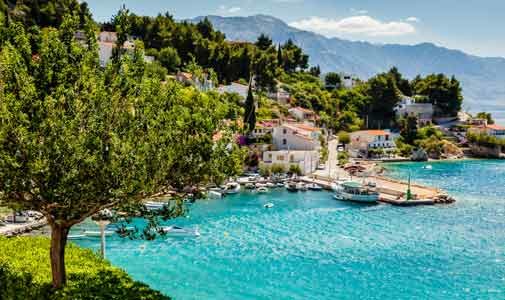 Today the area attracts travelers and expats seeking sunshine, history, and perhaps an exciting new chapter in their lives.

My husband Shawn and I have spent four winters in central Dalmatia, traveling slowly and getting to know the area’s landscapes and people. Since we’re looking to eventually plant roots in Europe, I’ve made a habit of looking out for real estate opportunities.

Central Dalmatian real estate has been popular for a while now. However, you can still find prices to suit most budgets. Offerings can be found in Split (Croatia’s second-largest city), Trogir (a UNESCO World Heritage site), or down the coast in Omiš (known for its rafting, kayaking, and hiking offerings). There are also opportunities on stunning central Dalmatian islands such as Brac, Hvar, Šolta, and Vis.

Those who choose to buy in the Dalmatia region are bound to find activities to suit their tastes. Not everyone is drawn to adventure sports, after all. There’s plenty to find though: scenic villages, coastal towns, gastronomic festivals celebrating the fine Adriatic cuisine, wild beaches, and lots of walking trails, nature, and history.

The landscape is typically Mediterranean, with lavender groves, grapevines, and olive trees all adding their allure to a coastline dotted with ancient stone villages and isolated farmhouses. Many of the properties in the area have been sympathetically restored as homes, guest houses, or retail businesses, but there are still plenty available for investors with vision, both in the rural areas and the cities.

According to the World Travel and Tourism Council, tourism contributed 25% of Croatia’s economy in 2016. Much of this economic activity was in central Dalmatia. This makes it a tempting place to purchase a property to live in part-time and possibly rent to tourists during the peak travel season. And renting out during peak season doesn’t put your own time there at a disadvantage—coastal Croatia’s climate is mild enough that staying there during the off season can be very pleasant.

Temperatures in Split in September, for example, hit highs of 77 F, with the lows only going down to 64 F. It only rains an average of five days during September.

This means that a shoulder-season stay is attractive, allowing you to take the local’s approach and save those July and August peak periods for renting to vacationers.

Toronto native Maryam Siddiqi is doing just that with a boutique apartment she’s named Stone House by the Sea.

Two years ago, Maryam and a friend purchased a one-bedroom apartment in Trogir, an idyllic town situated on an island that’s connected to the mainland via a bridge.

Maryam spends two to four months in the apartment each year. At other times of the year, she makes an income renting the property to tourists.

“I have found success renting the property as a holiday apartment—quite quickly, too. I’m about to open the doors for the third summer season, and as of the end of February, I already have almost 50 nights booked. Each year, Trogir—and Croatia as a whole—gets busier and busier,” says Maryam.

When it came to choosing where to invest, Maryam says Trogir felt like a good fit early on.

“I liked Trogir for a few reasons: It was small enough that I could get everywhere I needed to on foot and wouldn’t have to worry about needing a car, and also small enough that I could quickly meet people and become a familiar (enough) face to the local community. But at the same time, it’s only 30 minutes from Split whenever I need that big-city feel. It’s also only a 10-minute drive from the Split International Airport. Easy travel for me and for tourists,” says Maryam.

“The apartment’s windows offer a view over the tiny town, and we share a quiet courtyard with our neighbors. As busy as Trogir can get in the summer, the apartment is still a little piece of idyllic and historic Europe,” she says.

While properties in the heart of Trogir can be hard to come by, they do periodically appear on the market. Right now there’s a 968-square-foot house for sale in Trogir’s Old Town. This traditional stone home is furnished and has two bedrooms.

For those who dream of sailing Croatia’s Adriatic waters, there’s also a chance to purchase a spot to moor your boat. The house is listed at €185,000 ($226,288). See: Luxurycroatia.net.

If living close to nature sounds appealing, then you may want to consider the town of Omiš. This small harbor town, with some 15,000 residents, sits at the foot of the imposing Cetina River gorge, about 16 miles south of Split.

For the past three years, Maribeth The-isen and her husband, Allan, have been dividing their time between Hawaii and a property near Omiš.

“Our apartment is on the cliffs over-looking the Adriatic Sea…We wanted to be away from the hustle and bustle of a big city, but still near a town. Omiš is perfectly situated between Split and Makarska, in an area they call their Riviera. The medieval town flanks both sides of the beautiful Cetina River, which has carved its way through the tall rock mountains.

Omiš has several ancient forts and a historic church. The klapa (a cappella folk singing) festival is held there each year.

It’s also famous for the pirates who would taunt Venetian ships to chase upriver to their doom,” says Maribeth.

Maribeth and Allan have taken a liking to the people and scenery of Omiš.

“We appreciate the beauty of nature—mountains, rivers, the sea, forests—all well-protected by the government.

Because we are sailors, we enjoy taking our yacht out for a day, or island-hopping for a couple of weeks. We love the kindness and friendly nature of the people, who have had us to their homes for meals, have helped with translations, and taught us to pick olives,” Maribeth says.

The property is in a small settlement called Jesenice. It’s close to a beach and has a small, south-facing balcony with sea views. There is also parking. See: Firstpropertycroatia.com.

If you’re looking for something a bit larger, there’s also a sleek two-bedroom, two-bath apartment on the market in Dugi Rat, just a few miles from Omiš. This ultra-modern apartment costs €235,000 ($286,665) and features sea views and an elevator. Such things may seem like a standard amenity for apartment living.

But many older buildings in Europe don’t come with elevators. So having one can be a distinct advantage if your property is on the upper levels. In addition, this apartment is less than 350 feet from the beach. See: Croatiapropertysales.com.

Split is worth your attention if you prefer the dynamism of a city. We’ve used this coastal metropolis as our winter getaway for three years, drawn to its large-city amenities and small-town charm. Some of my fondest memories of Split have blended both, including walks through Marjan Forest, drinking coffee while people-watching on the Riva, or making a spontaneous day trip to a nearby island.

Boasting a 1,700-year-old palace built as a retirement retreat for the Roman emperor Diocletian, Split is a favorite among tourists, who enjoy the city’s labyrinthine streets, its vibrant bars, shops, and restaurants, and its historic architecture. The city is built on a peninsula and is also a ferry hub for travelers heading to the nearby islands. 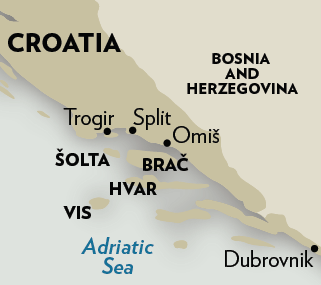 Even though Split is already well known, there are properties available throughout the city. You can buy a two-bedroom furnished apartment near Diocletian’s palace and the waterfront for €200,000 ($244,350). The property is located on the ground floor of a traditional stone house and offers 580 square feet of living space, plus a 130-square-foot garden. Given its prime location, the owners are currently renting it to tourists. See: Broker.hr.

Before committing to a purchase in central Dalmatia, it is important to spend time in the region. I have gotten to know both Croatians and expats and have heard stories of real estate successes and challenges.

At present, you can stay 90 days in Croatia without formalities. After that, you’ll need a temporary residence visa.

“Arm yourself with plenty of patience, and be find a good lawyer, I used local lawyer Tanja Grcic” says Maryam.

“This is key, as that person can protect you from any/everything that could go wrong. I also suggest visiting the town of choice a few times at different times of the year to make sure you’re comfortable in the space. (Parts of Croatia can be incredibly different during the summer when compared to the fall/winter.) And expect the purchase process, and even renting, to be slightly more complicated (in regards to paperwork) and expensive as a U.S. or Canadian citizen. Croatia is welcoming to Americans and Canadians. But because those countries are outside the European Union, the process isn’t as streamlined.

“Every purchase in Croatia is its own special journey, and we were lucky to have a fantastic lawyer who had our best interests in mind.”