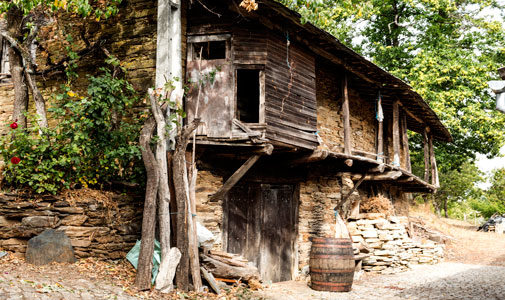 Trás-Os-Montes is perhaps the most remote and unspoiled region of western Europe.©iStock.com/Ribeiroantonio

A woman dressed in black from head to toe meanders on the road before me, an ancient rough-hewn stick in her hand. Her bovine companions moo and low, their flanks swaying rhythmically as she speaks gruffly to them, urging this one to hurry, that one to move aside. Waiting at a wooden gate, she nods in sympathetic motion, directing her charges as they file into their lodging. In typical trasmontana style, it is a slate-roofed, stone cottage built on two floors. Livestock is housed on the ground level, where grain and vegetables are also stored, while the family lives above.

I’m in a tiny aldeia—a village—in the extreme northeast region of Portugal known as Trás-os-Montes. The name translates to “behind-the-mountains,” notably those of Marão, Alvão, and Gerês.

This is where Spain’s Duero River becomes the Douro of Portugal. Younger generations born in this rugged and remote region have mostly emigrated to bigger towns and cities in the country, or to other European destinations.

The aging population that has remained lives life on its own terms. Attesting to this tradition is a saying that hints at the mindset of the people who brave this rough land. Translated, it goes, “Beyond Marão, those who rule are those who are there.”

There’s a clear sense of cooperation in these villages, ones like Vilarinho, Guadramil, Gimonde, and Rio de Onor—where the river gorge that separates Portugal and Spain splits the town in two and where locals speak a nearly extinct dialect.

The region’s inhabitants carve out an existence farming corn, rye, and wheat. They preserve their traditions by joining their common resources. Villagers bake bread in communal wood-fired ovens and share the use of threshing floors, mills, and pastures. Following age-old traditions, they cooperate in cleaning the river, tending the fields, and shepherding flocks.

To aid the region’s population, local councils, and park authorities are promoting tourism. To that end, a network of good roads has been created, and brown road signs point visitors toward aldeias preservadas: preserved villages, like those described above. The settlements often have less than 100 residents. Travelers also come across marked archaeological and nature sites, picnic areas, local museums, good hiking paths, and river beaches.

Although grain is grown in the area, the region is most noted for producing chestnuts, olives, and wine. Adventurous tourists who opt to follow the chestnut and olive oil routes in Trás-os-Montes will not only get off the beaten path and treated to the sight of chestnut groves and olive orchards. They’ll also experience nature at its best: mountain highlands, hills of heather, oak forests, and canyons sprinkled with tiny villages and vineyards. They’re all part of the wilderness surrounding the Douro River.

Bragança is the capital of the province.

Surrounded by medieval walls, it’s the best place to begin a journey through the area. On the main street is a museum, and atop a steep hill, in the Cidadela district, is a castle belonging to the Dukes of Bragança—Portugal’s last royal family. The castle’s keep, nearly 600 years old, hosts the Military Museum, with armor and other weapons of war dating from the 12th century to World War I.

Montesinho Natural Park lies north and west of Bragança, covering an area of about 466 square miles.

The park is rich in biodiversity; the European otter makes its home here, and its forests host roe deer, red foxes, the Iberian lynx, wolves, and wild boar.

Birdwatchers should be on the lookout for golden eagles, black storks, and red-backed shrikes, a rare peregrine falcon or an Egyptian vulture.

The Millennial Chestnut Route in the park leads you on winding country roads, past grazing cattle, flocks of sheep, forests, river beaches, and beautiful rural scenery surrounded by magnificent mountain views of the Serra da Coroa. Among its many trees is the enormous and ancient gnarled A Castanheira, the Chestnut Tree, which has been there for almost a millennium.

The quaint village of Vinhais, lying west of Bragança, is an ideal location for spectacular panoramic views of the park.

Horses and mountain bikes can be hired locally. The dovecotes of the area—pigeon houses with horseshoe-shaped roofs—are a reminder of medieval times. The pigeons were used for food—meat and eggs—and their droppings for fertilizer.

Directly south of Bragança is Chacim. Its history is linked to a legend that dates from the 9th century: Villagers rose up in revolt against the ancient right of jus primae noctis, a practice popularly depicted in the film Braveheart (or the epic of Giligamesh, if you prefer earlier sources), which involved the local nobleman’s taking a bride on her wedding night. Once, assisted by a mysterious woman, the townsfolk captured and killed the offender and his servants.

Southeast of Bragança is the historic town of Miranda do Douro, which boasts a 16th-century cathedral. This part of Portugal was isolated for so long that its natives still speak a different language, Mirandese.

On the olive oil route, visit Podence, famous for its Caretos. These masked young men dress in suits made of yellow-, red-, black-, blue-, and green-fringed wool quilts, and they wear brass, leather, or wooden masks. During Carnival, before the start of Lent, they appear in groups from every corner of the village. They run and shout, cowbells and rattles jingling from their belts, frightening people and “robbing” all the wineries, a practice derived from ancient agrarian fertility cults.

A highlight of a tour through this countryside is a visit to Quinta do Romeu’s 299-acre organic olive oil farm. Founded in 1874 by Clemente Menéres of Porto, today it is run by three of his direct descendants. You’ll never look at a bottle of olive oil in quite the same way. Pop into the curio museum, containing 19th and early 20th-century artifacts like music boxes, cameras, sewing machines, and horse carts, and then reward yourself with lunch or dinner at the restaurant. Try the espargos bravos (wild asparagus) and alheira caseira na brasa (roasted local sausage). Oh, and wine. Quinta do Romeu also produces not only bottle corks, but scrumptious, award-winning wine.

Bring your camera, your appetite, and, most of all, your imagination when you visit Trás-os-Montes. After spending time there, you’ll be able to tell your friends that Portugal is much more than Porto’s fortified wines, Lisbon’s trams, and the Algarve’s sunny, sandy beaches. You’ll be able to say you were no meio do nada, “in the middle of nowhere,” in a region bountiful in beauty, in a land that whispers of the past.

What You Need To Know About Trás-os-Montes

When to go: Go in fall for the autumnal colors, chestnut harvest, and st. Martin’s Day, November 11. Traditionally, this is the first day when new wine is tasted; it’s celebrated around a bonfire eating the magusto—chestnuts roasted in the embers—and drinking água-pé, made by adding water to the pomace left after the juice is pressed out of the grapes for wine. Locals also enjoy jeropiga, a sweet liquor with the stronger, brandy-like, aguardente added.

How to get there: The area is accessible from Porto International Airport or from Vigo, in Spain. Many airlines offer flights from points in Europe, among them American Airlines, British Airways, Delta, Air Fance, KLM, Air Canada, and Lufthansa. Rent a car for the 45-minute drive to Bragança, or a bus will get you there in just over three hours for about $14. See: Rodonorte.pt.

Where to stay: You’ll find comfortable lodgings from as little as $70 a night, breakfast included. That’s available at one of my favorite places to stay, Agroturismo casal de castro, located at Largo Abilio Augusto, 8 Avantos, Romeu, Mirandela. Tel. +351 (913) 300-384.

Other choices include Pousada de Bragança, a five-minute walk from Bragança’s town center. Rooms are a bit pricier, beginning at $90-plus a night, depending on the season and type of room. But it’s a perfect start for your journey, with fine cuisine, mini-bars in the rooms, and a pet-friendly policy.

In a class of its own, Hotel casino chaves, at Lugar do Extremo, chaves 5400-801 has marvelous views, an elegant pool, an English-speaking staff, and more.

Vidago Palace Hotel: The place to stay for a sophisticated, Belle Époque experience if you have a sizable travel budget.

Casa do Correio: This rural turismo gem dates from the 1930s but has been lovingly restored and decorated. Rates range between $90 and $115 a night, depending on the season. (It includes a common living room and kitchen, and private room with bathroom.) Be sure to sign up to ride on one of the renowned Mirandese donkeys. 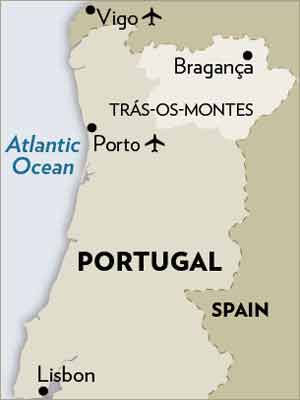 Where to eat: Two people will eat a feast made from fresh local produce and meats for around $30 to $70. Here are a few of my restaurant picks:

O Paulus: This traditional-style restaurant is located where the Millennial chestnut route ends in Vinhais. Save room for the sonhos. Portuguese for “dreams,” these deep-fried, cruller-style treats are dusted with confectioner’s sugar, drizzled with warm caramel, or topped with warm jam.

Maria Rita (at Quinta do Romeu): Cozy restaurant in a traditional, home-style setting. Sample the tasty bacalhau com broa (cod with corn bread) or a wild asparagus and bread stew. Plan on $33 to $67 for dinner for two.