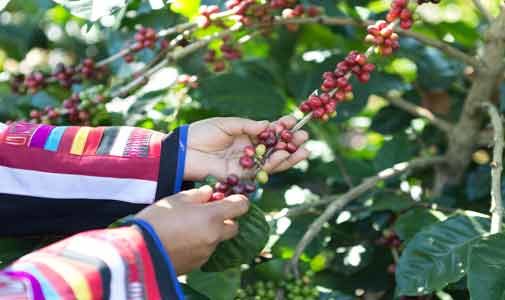 Ban Huay Hom is a secret, although its coffee is known worldwide.©iStock.com/HappyBees511

For a taste of the exotic—and world-class coffee—head to Ban Huay Hom, a tiny village nestled deep in the lofty mountains of northwest Thailand. It’s a scenic hour’s drive on winding, paved roads from Mae Sariang, near the Myanmar border.  The village is so remote that it doesn’t even show up on Google Maps, yet it’s a perfect weekend getaway from the northern hub of Chiang Mai.

Arabica coffee grows well at higher elevations, so the cool, sunny days in 3,300-foot Huay Hom are perfect for growing rich, organic coffee. On any given day, the villagers are either tending their coffee trees; harvesting, preparing, and drying the beans—a three month process—or roasting them for distribution. When the beans are finally ready, they’re sold to Starbucks and other outlets, where they eventually find their way to discerning coffee drinkers everywhere.

The Huay Hom villagers are members of the Karen minority, and they dress in colorful, traditional hand-woven tunics, sarongs, and turbans. You’ll see them sipping coffee from Starbucks mugs and showing off the Starbucks 2004 annual report that featured the village. Best of all, you are unlikely to run across any tourists here—few people other than locals know of this town.

“The coffee is delicious, but even if I wasn’t a coffee drinker, I’d still come here for the amazing scenery and traditional culture,” says International Living Vietnam Correspondent Wendy Justice. “I discovered the village during a tour with Thailand Hilltribe Holidays, and it was a highlight of my trip.”

Egypt Before The Pharaohs

While the tour groups and buses head to the Valley of the Kings, don’t miss the opportunity to visit a lesser-known but much older archaeological site in Egypt.

The Cave of the Swimmers at Wadi Sora, discovered in the 1930s, features black silhouetted human figures that appear to be swimming. Nearby caves show tethered animals and their keepers, suggesting agriculture was part of the cave-dwellers’ culture. The artworks date to 8,000 BC.

If you’re looking for love, why not write to the “Bridegroom Oak,” a 500-year-old tree in northern Germany’s Dodauer Forest, about 100 miles from Hamburg? It’s the only tree in the world with its own mailing address and is said to be responsible for 100 marriages since the tradition began.

In the era of online introduction services, smartphone apps and speed dating, it’s hard to believe that such a quaint custom could survive, but perhaps the old ways are still the best. The tree receives about 1,000 letters a year. The local postman climbs a ten-foot ladder to deliver the letters into a small hollow. This is where people come to look through them. If they ﬁnd one they like, they reply.

The only rule is that they must put back any letters they don’t want to answer.

It started 128 years ago when a local girl and a young chocolate maker fell in love but were kept apart by the girl’s father.

They placed letters in the tree to secretly communicate and ﬁnally, in the summer of 1891, the father relented and the pair were married.

The story inspired romantics to write to the tree and so many letters arrived the postal service gave the mighty oak its own address. What is it? It’s Dodau 99, 23701 Eutin, Germany.

Sri Lanka is one of the top tea producers in the world, and the town of Haputale is at the heart of highland tea country. It’s a good base for exploring the region.

Superb hiking trails lead to the remains of ancient empires and panoramic views. National parks provide some of the best wildlife watching outside of Africa. The country’s diversity of landscape and culture is matched by its rich history. Sometimes you can catch a glimpse of the country’s colonial past at the same time as appreciating its breathtaking natural beauty.

For instance, from Haputale it’s easy to get to Lipton’s seat, named for the Scottish tea baron, Sir Thomas Lipton, who used to sit on high and look out over his domains.

A sea of green tea plants carpets the steep, surrounding hillsides, and from this high point you can see the ocean 75 miles away. Take a tuk-tuk up the hill and, if you’re feeling fit, you can walk the 5.5 miles back down the winding road and soak up the exceptional views of the working tea plantations, while getting a brief insight into the lives of those who tend them. Go in the morning, before any mist forms, to insure you get the best view.

Lipton’s seat isn’t the only attraction in this area. You can take one of the most scenic train trips in the world between Ella and the town of Nuwara Eliya. Once the playground of the tea barons, the town and the area around it has been nicknamed “Little England.” Enjoy high tea at the nostalgic Grand Hotel there or play 18 rounds on the lush greens of the golf club, right in the middle of town.

Or simply while away an hour in the subtropical Hakgala Botanic Gardens.—IL Roving Correspondent Sharyn Nilsen.

Dine on a Historic Train in England

A World War I ambulance train carriage has been given a new lease on life…as a trendy restaurant.

The historic carriage was originally built in 1911 as a third-class corridor passenger coach. It was turned into an ambulance train in 1918.

The “hospital on wheels” transported injured British soldiers from the front line to French ports, so that they could be shipped home to England.

Today it has been converted into a dining car with tables and chairs. It is part of the Station Kitchen—a railway-themed restaurant in Dorset, England.

The restaurant whisks you back in time, with classic dishes with a modern twist (better than any hospital food) that are served in a historic location.

The restaurant is built next to a closed railway station, and the carriage is set on the disused tracks. See: Bridportrestaurant.co.uk.

Join a Battle on Mallorca, Spain

“Every May, islanders on Mallorca celebrate the town of Sóller’s victory over Algerian and Turkish invaders,” writes International Living contributor Mike McDowall.

“The original battle took place in 1561, when there were fewer than 900 citizens in Sóller. So the annual ‘Es Firó’ re-enactment, involving tens of thousands, has far outstripped history.

“The biggest event is staged at port de Sóller, but there are numerous skirmishes around the valley too.

“If you plan to attend, keep an eye out for the many hand-launched fireworks and inexpertly wielded swords. Smoke grenades are thrown around with abandon, and the event is a good excuse for local boat captains to have a clear-out of any expired emergency flares. Despite its absolute disregard for health, safety, and sanity, I’ve witnessed no injuries.”

Es Firó events take place throughout May. The battle re-enactments are due to be held on May 14.

“Fortunately, there are plenty of nearby spots that are just as special…minus the lines and inflated prices. Like Bangalow, a leafy little town just a 20-minute drive from Byron Bay.

“Both towns are definitely worth a visit, but the prettier Bangalow just might surprise you.”

DID YOU KNOW? The world’s largest outdoor swimming pool holds 66 million gallons of water and is 3,323 feet long. It’s found on the seafront of the San Alfonso del Mar resort near Valparaiso in Chile. 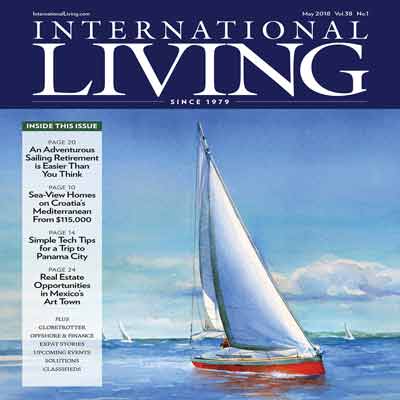 Steel drum bands under palm trees, snorkeling among the sunken temples off the Mediterranean coast of Turkey, tacking a course through the tropical islands off the Thai coast. Any one of those experiences would be a highlight in most people’s retirements. But what if you could have them all—and more? Sailing is not usually thought of as a frugal pastime, and yet the irony is that it’s one of the most affordable modes of transport there is. With a fair wind and an open mind, the world is your oyster. A retirement spent on the open seas is not the bottomless money pit that you might think it is. Sure, there’s the initial investment of buying a boat, but once that’s paid for, it is possible to keep day-to-day costs close to, or less than, what you already pay on dry land. In this month’s cover story, the seafaring expats we proﬁle make a convincing case for a sailing retirement—spent ﬂitting from port to port in some of the world’s most beautiful, historic, and uplifting warm-weather destinations. Find out here…