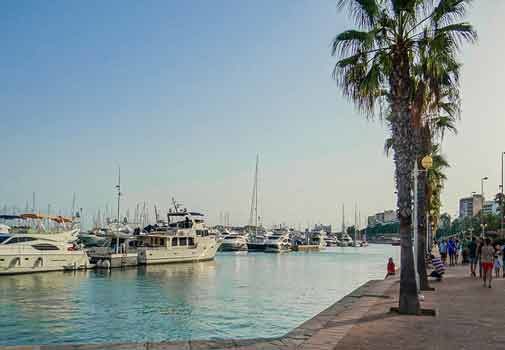 The tradition of sailing in the calm protected waters of the Mediterranean stretches back into time immemorial. ©Glynna Prentice

Cruise Down the Warm Pacific Coast

While most people only dream of sipping piña coladas, dancing to steel drums, and swimming in warm, sapphire waters during their retirement, Fran and Dave Taylor took action to make their sailing retirement come true. They bought a sailboat and spent 10 years cruising the palm-lined Pacific coast of Mexico and Central America before moving into the Caribbean.

“We first started getting interested in sailing in 1988,” says Fran. “We went to Hawaii to sail for a week, which included diving. After that week, we were convinced we wanted to get a sailboat and live aboard so we could dive from our own boat.”

The couple’s next step was to spend a week in Florida. They found a sailing school in Fort Lauderdale accredited by the American Sailing Association (ASA) and enrolled in a one-week course. The $2,000 class gave them a certificate to bareboat and sail independently, without a crew. After earning their ASA certificates, Fran and Dave returned to their home in Reno, Nevada. They continued their sailing lessons on nearby Lake Tahoe for $45 a week.

When Fran’s office position was relocated to San Diego, the opportunity to buy a boat emerged. The couple made the decision to hire a broker in Southern California to help them find a seaworthy vessel.

They viewed several different options before finding a match: a Downeast, 45-foot ketch rig, built in 1979. They bought the sailboat for about $115,000. Her name was Sorrento.

It took about two years to get Sorrento ready for her maiden voy-age and during that time the couple joined a friend’s boat for a group sail down Mexico’s Baja Peninsula.

The journey, called the Baja Ha-Ha, was 900 nautical miles (roughly 1,000 miles) and it dramatically boosted their confidence levels.

A year later, they set sail.

Slipping out of U.S. waters, Sorrento began carving a path down the western edge of North America towards the Panama Canal.

Under the sunny skies of Mexico, Fran and Dave snorkeled in the clear waters of Zihuatanejo, a hidden bay made famous by the movie The Shawshank Redemption.

They sailed past the steep cliffs of Acapulco, where divers leap from dizzying heights into ever-changing and uncertain waters.

In the Gulf of Fonseca, a sheltered bay shared by El Salvador, Honduras, and Nicaragua, they climbed the volcanic peak of Isla del Tigre to take in the panoramic views. In calmer waters off the coast of Central America, the couple saw dolphins and whales breaking the surface.

Out on the open water, the wind and sea help to supplement costs. Fresh seafood caught from the stern of Sorrento often made it onto Fran and Dave’s sunset dinner menu. Using their sails minimized the need to burn engine fuel.

The couple’s expenses during the initial part of their trip were roughly $600 per month, and even included an occasional flight back to the United States.

Since Fran’s sister lived in Las Vegas, they were able to use her address for administrative and financial affairs.

“As long as your finances are in order and you can live off the sea, you should be fine,” says Fran.

In Miami, the Virgin Islands, and Colombia, Fran and Dave took seasonal jobs. With their fun-loving and friendly personalities, they were frequently sought-after for tourism and customer service positions.

“We found work in Miami working for Starbucks and then worked for West Marine, a boating supplier,” says Fran. “We were able to get new and better equipment for our boat.”

Even so, the most affordable region to sail in, for Fran and Dave, was farther south. “Central and parts of South America offered the best value. We lived in Guatemala one hurricane season for maybe seven months. We were 20 miles up into the Rio Dulce River.

We docked the Sorrento and were able to travel by bus to the Tikal ruins, Antigua, and campsites in the beautiful mountains. It was extremely affordable.

“When we lived in Cartagena, Colombia, we were docked at Club Nautical. As we left the docks to go ashore, we could leave our laundry in the morning and pick it up late that afternoon.

“Getting around was easy by taxi. I actually worked in a coffee shop that the cruise ship customers frequented. Four days of work paid for our slip for the month. Food, drinks, and provisioning were very reasonable.”

When asked for advice on how to follow in their footsteps, Fran and Dave say, “Get out on the water to determine if you would be comfortable on the open seas. Rent a boat for a week to live aboard with a certified captain. Take as many boating classes as possible. You should feel confident and comfortable at sea.”

Sailing Through History on the Mediterranean

The tradition of sailing in the calm protected waters of the Mediterranean stretches back into time immemorial.

These are the waters where Phoenicians traded, the ancient Greeks did battle, and from where the Roman Empire stretched.

Onshore, you might stroll among the time-forgotten medinas of the North African maghreb, or drink pine-scented retsina at an undiscovered Greek island taverna. Moor up in the shadow of a Templar castle on the rocky coves of Malta, or stop for tapas and culture in the balmy surrounds of Malaga, the Spanish city where Pablo Picasso first took up a paintbrush.

And Mediterranean sailing is surprisingly affordable. There are variables—how often you stay at marinas and whether you cook on board or eat at restaurants are big factors—but a monthly budget of $1,500 is enough for many. Factor in $210 for parts, $255 for maintenance, $150 on insurance, $125 on fuel, around $300 for food and $375 for marina fees. It all comes in at less than a winter spent at home.

“Our boat was located in Tunisia when we purchased it in January 2015,” says Charles Buelher. “We absolutely loved Tunisia. Not from the sailing perspective, but for the country, people, and culture.”

It’s a great place to start, and affordable too. Marinas such as the one at Cap Monastir offer daily berthing from around $15. In the years since, Charles and Susannah have continued exploring the central and eastern Mediterranean.

In addition to offering an ideal quality of life, sailing in the Mediterranean can also be affordable. Susan Bell from Massachusetts has been sailing the Med for three years. “My favorites are Croatia, Greece, and Italy, but with so many countries and so much coastline, they all have their charm,” she says. “I’ve hauled up my boat on Manoel Island in Malta, too, which is a good choice for maintenance.”

But when it comes to the most afford-able destination, for Susan, her choice is clear.

“Greece,” she says. “There, you can tie up at town quays for as little as $16 a night.” With a kilo of tomatoes coming in at around $1, chicken around $2.50 a pound, and a liter of domestic beer costing less than a dollar, it’s a good spot to stock up on supplies. Mooring fees around Greece are cheap. Some, like the pontoons at Meganissi in the Ionian island group, are free for sailors who have dinner at its onshore tavern. However, during the cooler months Susan prefers to be a little further west. “I winter in Sicily. I like the cost, and love the people and history.”

A winter berth at the Marina de Ragusa (October to April) costs around $1,500.

Affordable and Exotic Southeast Asia: An Easy Location for Cruising

Asia’s friendly people, beautiful tropical islands, and low prices make it an unmissable destination for the dedicated retiree cruiser. Dock fees at top-end marinas are low, and with prices for food, supplies, repairs, and maintenance being among the lowest in the world, it’s a preferred stopping point for seeing to the necessary upkeep of boat and body.

And though it may be far from the waters of the Caribbean and the Mediterranean, that doesn’t mean you should rule it out as a destination for your sailing retirement. As Kent Bradford says, “You don’t have to cross oceans. You can buy a boat in the Caribbean, be there for a few years, then resell it and a buy a different one in the Mediterranean or Asia.”

Lars Hässler, 72, has sailed in the region extensively. The retired lawyer has written nine books on his experiences circumnavigating the globe on the sailing yacht Jennifer (See: Yacht-jennifer.nu).

“Asia is so much bigger than the areas one normally sails in the Caribbean and the Med… Also, for me at least, Asia has more exiting cultures,” Lars says. Another upside is value for money: “Asia is much cheaper than the Caribbean and Mediterranean.” The social scene among sailors in Asia is a plus point too. “Abanico Yacht Club in Puerto Princesa in the Philippines is very nice. Also, there are nice bars in northern Palawan, the El Nido area and of course Boracay. And there are some in southern Bali as well.”

International Living’s Thailand Correspondent Michael Cullen recently sailed to the Andaman Islands off the east coast of India among a small group of boats taking the trip together for company. The flotilla explored the 15 or more islands that are accessible to travelers (many are restricted to help protect the indigenous populations) and cruised the crystal-clear waters of some of the world’s richest and least spoiled marine reserves.

“Swimming, fishing and exploring by kayak, or by foot on land, was how we spent the days,” Michael says. “Gathering together on one of the anchored boats for a shared meal, cold drink, and friendly conversation filled the evenings.”

Elsewhere in Southeast Asia, Palau, to the east of the Philippines, is an island chain with close ties to the U.S. and a reputation for some of the best scuba diving in the world.

“The cruising life is available even to those without their own boat,” Michael says. “Longer crossings, for example, Asia to the Mediterranean, or trans-Pacific journeys, take more time than boat-owners have available. In those cases, taking on an extra hand for the journey makes sense.

And for “freelance” sailors with mechanical or electrical expertise, picking up a pas-sage can be a great way to get some sailing time.” See: Findacrew.net.

Five Tips For Buying A Boat

1. Decide who you’ll be sailing with, and buy your boat accordingly. You’ll have plenty of volunteers for daytrips, but can they sail? don’t buy a boat that needs more trained sailors than you can provide.

2. Be sure to get a survey. Even if it makes for frightening reading, a surveyor’s report is invaluable. This is a large investment, you need someone with a cool head to check it for faults.

4. Budget for refitting and annual maintenance, and look after your investment. A boat stuck in dock for repairs is no fun.

5. Take your safety seriously. Make sure you have a certified ocean life raft, life jackets, harnesses, Vhs radio and if possible, a satellite phone. Get these before anything else.