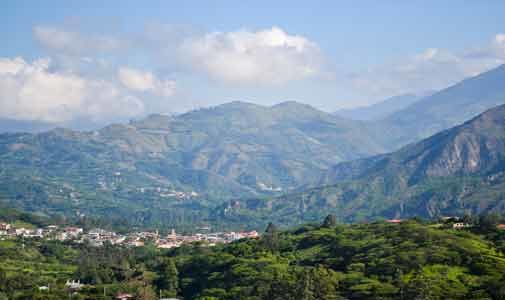 Vilcabamba has become a hot-spot for expats looking to create a different kind of life for themselves. ©Wendy DeChambeau

If the earth truly had corners, you could say that Vilcabamba, Ecuador, landed in one of the farthest. It has a distinct aura all its own. The place itself is a bit like something out of a Tolkien-meets-Thoreau text.

Rising out of the Ecuadorian Andes, the valley of Vilcabamba—and the town of the same name—have become famous the world over for their pristine environment and the vibrant outdoor life. The area abounds in lush vegetation, including a stunning variety of fruits and vegetables and a staggering array of wildlife.

And Vilcabamba residents are renowned for their longevity (stemming from one of the world’s healthiest lifestyles). These benefits have drawn expats in search of fresh air, serene surroundings, and an alternative way of life.

International Living first visited Vilcabamba more than a decade ago, and one of the nicest things about the place now is that it’s kept the same friendly, small-town feel, even after all these years.

Near-vertical emerald mountains coated in mist surround Vilcabamba’s little valley and there are plenty of scenic haunts in the forests and trails near this Andean town. The area’s reputation for long-lived locals has earned it the moniker “Valley of Longevity,” and its tranquility attracts many a nature-lover and deep thinker to this part of the world. This is where Richard Wheeler, 69, and Norie Huddle, 70, have found themselves.

It’s a lucky couple who get to spend their time pursuing their passions and doing what they love. From their cozy house with a wrap-around deck overlooking the Vilcabamba River, Norie and Richard enjoy some of the most peaceful and scenic vistas anywhere.

And an incredibly affordable lifestyle to boot.

It’s easy to splurge on the abundant good food and artisanal products available in Vilcabamba when day-to-day expenses are ridiculously low. As they can produce so much food on their own land and use very little electricity (thanks to the spring-like climate, they don’t need heating or air conditioning), Norie and Richard spend only about $100 a month on personal expenses. Some $23 covers all their monthly utilities and another $12 goes toward transportation. They spend around $25 a month for food items like chicken, milk, and bread. Nearly all the rest of their diet comes from right outside their door. Internet is the biggest expense, coming in at around $50 a month.

One of Norie and Richard’s favorite places to indulge is at the French bakery, La Baguette, where delicious breads, quiches, and other delicacies are sold. However, the place is so popular that, if they don’t get there by 1 p.m., there is a good chance the goodies will be gone.

Norie says, “There are a lot of people who have moved here and a number of locals who have little home businesses. They make really nice cheeses, yogurt, and there’s even a microbrewery.”

Richard is an artist and musician who also specializes in rolfing (a holistic type of massage therapy). Among Norie’s talents and interests are writing, drawing, and practicing a mental health therapy known as Voice Dialogue. For this creative, introspective couple, the atmosphere in this part of the world gives them plenty of inspiration.

Their property lies near the end of a road that runs through a small mountain pass. Norie says “one of the things we discovered is what we call the ‘magic mountain effect.’ It lasts for just a few minutes at night, and the mountains get this incredible color that’s kind of orange, pink, and purple. It’s just amazing. That’s our TV.

“Most days, we get up around 6:30 or even earlier, and the sound of the birds is just beautiful at that time. After that, we have a cup of tea or coffee with breakfast, do a little exercise, and then we get on with our work.”

Norie also likes to spend time working in her garden. But then, anyone with a love of plants and earth would be on cloud nine in this environment.

On just a small portion of their 350 acres, Richard and Norie are growing carrots, beets, leafy greens, coffee, sugar cane, bananas, various citrus fruits, apples, mulberries, and a whole lot more. They can thank Vilcabamba’s climate for the abundance and variety of food. “It’s between 60 F and 80 F year-round. And we have a 365-days-a-year growing season. It’s a permanent spring,” says Richard.

With such wonderful weather and gorgeous surroundings, it may come as a surprise to know that Norie and Richard originally had no intention of living here.

The couple come from California and Virginia and were simply in Ecuador on a vacation. “If you’d told me I might buy something in Vilcabamba, I would never have come,” says Richard.

Norie explains what happened. “We had been on the land [their current property] for about 30 seconds and we both looked at each other and kind of gasped. We knew we had been spiritually hijacked.” That was in March 2007. They bought half the land then and the other half a bit later. In 2010 they applied for and received their residence visas, and they’ve been full-time residents ever since.

In addition to their house, Richard and Norie have also constructed a quaint, round, rock-faced building that doubles as a meditation room and recording studio. On the lower portion of the property, fronting the river, is a large, two-story event center and lodging facility that they call Café Cosmos. They hope to use it as a training center for their own projects and those of others.

With so much to keep them busy and happy at home, it’s a wonder that the two ever set foot outside their property. But there’s far more to love about Vilcabamba than the terrain and tranquility. “We have a network of friends that we’ve been building within the expat community.

There are some absolutely stellar people,” says Norie. “And we’ve got a lot of Ecuadorian friends. Most of the people are just really nice.”

“The expat community is different here than in a lot of places, I think, because we have people here from all over the world,” Norie says. For a linguist like herself, the international fusion is a great bonus. Norie speaks several languages, including Spanish, Russian, and even Japanese.

There are plenty of spots in town where the couple can meet with friends and enjoy some good food. A walk through Vilcabamba’s main plaza showcases some of the best little eateries. And there are plenty of folks to chat with. It’s one of the small-town advantages.

At the end of the day, Richard and Norie are blessed with even more gifts from nature. “You can see the stars at night,” Richard says. “And the fireflies are here year-round!” A late-night lightshow is a fitting end to a day filled with beauty in Ecuador.

Is a Vilcabamba Life the Right Choice For You?

There’s no denying the appeal of a healthy life in the Ecuadorian “Valley of Longevity,” and Vilcabamba could be just the right place for you. but how can you be sure? Well, an exploration trip of your own, with a visit to the town, is the only true way to know if it’s a good fit.

But in the meantime, there are a few things you can think about that may help you decide.

First, Vilcabamba is a small place.

There is no theater or ballet or major league sporting events. While there are fun outings from time to time, if you move here, you’ll likely find yourself with a lot of quiet time. If you’ve got a hobby, or enjoy meditating or just being alone with your thoughts, you’ll do well.

Another thing to be honest about is whether you’re the outdoor type. It may be obvious, but if you don’t like being out-doors, you’ll be missing out on some of the area’s best features. Gardening is a popular pastime here because of the variety of flora and the never-ending growing season.

There are miles and miles of hiking trails close by. And nearby Podocarpus National Park is a prime spot for horseback riding.

Vilcabamba is a freewheeling sort of place, beloved by pioneering types who enjoy the alternative lifestyle options of its invigorating location. It attracts people from around the globe who have many different world views. This can create superb conversation…or tense arguments. If you enjoy hearing differing opinions and meeting people with different interests, you’ll do fine here. And chances are you’ll learn plenty from others, including alternative medicine, little-known musical instruments, and creative art techniques. For some, Vilcabamba is just a little too far outside their comfort zone. For others, it’s bliss.