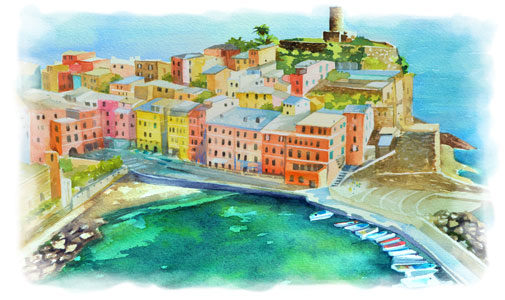 Choosing a home close to a marina allows for the replenishing of stores, experiencing local culture, and inland explorations. ©ColleenClapp

Racing a pod of dolphins riding your wake…gazing at the Milky Way in all its splendor…hopping from private island to isolated cove…catching fresh mahi mahi for dinner.

There are many pleasures that come with sailing the open sea, whether you’re in the Pacific or Atlantic oceans…or the Mediterranean, Caribbean, Adriatic, or Andaman seas. These days you don’t have to be an explorer to enjoy it all and much more. GPS makes navigating a snap. And full service marinas can be found in just about any location across the globe.

You’ll be in good company. Many folks are embracing the sailing life in their monohulls, catamarans, yachts, trawlers, and other craft of all sizes and shapes, making a comfortable life onboard.

But sometimes you want some time ashore for replenishing stores, experiencing local culture, inland explorations, and stretching your legs a bit. You can find such havens across the globe.

Part of the Bay Islands, the most populated island Roatán is 40 miles from the northern coast of the Honduran mainland. It’s largely English speaking thanks to a long colonial relationship with the United Kingdom. But it’s a mix of cultures, including Garifuna, native islanders, Spanish-speaking main landers, and plenty of sun-seeking expats. A mountainous jungly interior gives way to white-sand beaches, and rocky coves, interspersed with pleasant and colorful traditional fishing villages

It’s the affordable Caribbean. The Mesoamerican Reef just offshore provides the world-class scuba and snorkeling Roatán is best known for. But fisherman and boaters will find a lot to love as well. Many sailors anchor just offshore near French Cay. But there are also plenty of full service marinas. It’s popular with sailors as it is rarely hit with the hurricanes compared to many other Caribbean destinations. A one-bedroom condo in the Parrot Tree resort and marina development is listed at $98,000. In the seaside community of Sandy Bay, which is mostly residential but close to shopping and dining, is a two-bedroom villa in a small community with its own dock, tropical gardens, and pool. See: Century21roatan.com and Roatan-realestate.com.

Set in the Andaman Sea, Phuket is the best-known of Thailand’s many islands. It’s a favorite vacation spot, with many resorts on its beaches, as well as golf courses and hedonistic beach party towns. For yachties it’s a great home-port in Southeast Asia to explore the Phi Phi Islands and Phang Nga Bay, known for the vegetation covered limestone spires that jut out of the clear turquoise water and hundreds of deserted islands. You’ll find marinas all over Phuket. But there’s a cluster on the southern shore.

Near the family friendly beach area of Rawai are several on-shore housing options near world-class marinas and yacht clubs. Foreign ownership of real estate is tricky in Thailand, so most expats rent. A furnished one-bedroom apartment close the water, with community pool, is listed at $594 per month. In the same area is a one-bedroom apartment in a luxury hotel featuring pools, sauna, 24-hour security, and other amenities. It rents for $954 per month. See: Livephuket.com.

Mallorca is the largest of the Balearic Islands, the autonomous Spanish region just off the coast of the Iberian Peninsula. You’ll find evidence of its long history in the Gothic cathedral of the capital city, Palma, and the hilltop castles in the mountainous countryside, as well as Arab structures built before the Reconquest. You’ll also find Roman ruins—evidence of its importance as an outpost of that empire.

The whole coastline of this 1,405-square-mile island is ringed with marinas and harbors…and natural rock-lined coves offering privacy. It’s the perfect place to weigh anchor in the western Mediterranean; the year-found mild climate helps there too.

Puerto Pollensa (Port de Pollença in the local language, Catalan—Spanish is also spoken), is on the northern tip of the island. Once a quiet fishing port, the town and surrounding area became the favorite of holiday-makers years ago, including Agatha Christie. In town, next to the port, is a two-bedroom penthouse apartment with large terrace for dining al fresco for $233,152. Another two-bedroom apartment near the water is available for $166,537. See: Balearic-properties.com.