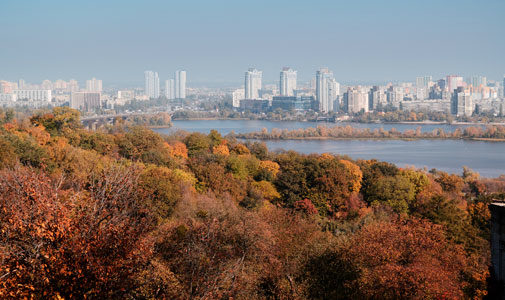 Although Ukraine suffers from a slow economy, there are great opportunities for profit in Kiev.©iStock.com/Sckrepka

A lot of investors like to think of themselves as “contrarian.” But in practice, most investors shy away when it comes to pulling the trigger on a truly contrarian investment opportunity.

It’s only human…It’s hard to defy everyone else and conquer your gut instinct—which is telling you to run, fast, in the opposite direction.

Which brings us to Ukraine. Though blessed with some of the world’s most fertile farmland, at the crossroads of Europe—as well as a well-educated population of 45 million—Ukraine has been the slow man of Europe. Even a few decades after the end of the Soviet Union, its GDP per capita stands just above Guatemala and just below Swaziland and El Salvador.

Today, the frozen conflict with Russia drags on. Thousands have been killed—and it’s taken a toll on Ukraine’s economy. The pall of war was a big reason for the 9.8% contraction in the country’s economy in 2015…and for why foreign investors continue to shy away.

I’d love to tell you that things in Ukraine are looking up…that, 27 years since the end of the former Soviet Union, the country is now (finally) getting its act together.

I could talk about reform of the banking system…a reduction in the country’s fiscal deficit…the evolving effort to reduce corruption…lower poverty rates…the stabilization of the currency…and higher foreign currency reserves. Forecasts call for economic growth to double from last year’s levels to 4% in 2019.

These things are true. But I’d be lying to you if I told you that they mean that Ukraine is, once and for all, turning the corner.

You see, the country is a heartbreaker.

There are more broken promises in Ukraine’s recent history than in Elvis Presley’s entire career collection.

Ukraine has had enough false dawns to fill a calendar. The old joke about Brazil applies here, too: “It’s the country of the future…and always will be.” A stopped clock is right twice a day—and one day (someday…) Ukraine will be the place to invest.

Today Transparency International ranks Ukraine as 130 on its Corruption Perceptions Index—on the same level as Gambia, Iran, Myanmar, and Sierra Leone. The World Economic Forum ranks it 81 on its Global Competitiveness Index—below Bhutan. And the World Bank lists Ukraine at number 76 on its Ease of Doing Business Index, below the Kyrgyz Republic and China.

And the country took yet another step backwards in doing away with corruption when the parliamentary majority recently introduced legislation that would give the government the power to remove the head of the National Anticorruption Bureau (NABU)—which would, of course, limit the NABU’s powers immensely.

The bill was later withdrawn after a public outcry and critical statements from the IMF and World Bank.

But it shows just how big a problem corruption still is in the government.

And let’s not forget that, a few years ago, there was a bloody change of government in Ukraine. That was just the latest chapter in the country’s tumultuous post-Soviet political history.

But none of this matters…at least when it comes to real estate.

Ukraine real estate is at historical lows. It’s at its lowest price level in the last 15 years.

That’s more than 75% below historical highs—still, even in a world where real estate valuations are back up to 2007-2008 highs.

Just consider… In 2004, properties in Kiev went for about $1,000 per square meter. Over the next three years, prices rose six-fold. Then the global economic crisis struck, and valuations in Ukraine collapsed. Today, apartments in Kiev sell for around $1,600 to $1,900 a square meter.

Today, the center of Kiev is where it’s at—as is the case in most capital cities around the world. It’s made up of beautiful old buildings, cafés, boutique hotels, and cobblestone streets. Squint and—on some streets at least—you could imagine you’re in Paris.

And there are only a certain number of apartments, offices, and shops in the best parts of town. As the old saying goes about land, they’re not making any more.

Kiev is experiencing a massive structural housing deficit—especially in the middle- to upper-income segments. In the last five years, greater Kiev has grown over 10%—to 3 million inhabitants, thanks to internal immigration from Eastern Ukraine. And at 19.3 square meters of housing per person, Kiev is far below the European Union average of 41.6 square meters.

And there are few high-quality, modern developments. Most buildings are of older Soviet design, with substandard renovations and aging infrastructure.

These factors should help raise prices.

John Suggitt is a Canadian who has been in Kiev for 17 years. He was a banker in Ukraine for more than 10 years. First he was the manager and founding partner of Concorde Capital, a Ukrainian investment bank. Then he was the chief operating officer with Ukraine’s largest broker, Dragon Capital. So he’s seen Ukraine through a lifetime’s worth of ups and downs. And he’s been watching real estate in Kiev for a long time.

John left the banking world in 2012, and in 2014 he founded Kiev Real Estate Recovery (KRER) Fund, a fund management company, to invest in residential properties in the best parts of Kiev. (I met John only four years ago, but through friends and colleagues—I was in the banking world in Russia for nine years from the mid-1990s—I’ve known of him and followed his progress.)

The KRER funds are about as niche as you can get. The idea behind them is to buy apartments on the cheap in a very specific part of Kiev. KRER is looking for beautiful but old buildings—pre-revolution structures that were built well and near the homes of the old nobility. In most cases, these buildings’ most recent renovation was 30 to 40 years ago.

(Ironically, one of the benefits—for John and his funds at least—is that Ukraine’s amazing dysfunction guarantees a constant parade of well-paid consultants and employees of the U.S. government, the European Union, the World Bank, the International Monetary Fund, and an alphabet soup of other would-be dogooders. All of these expect—and their employment contracts demand—nice, well-renovated apartments in the center of town.)

Eventually, the funds will then sell the apartments, once the market (eventually) picks up.

The real estate market heavily favors those with cash. Since the 2008 financial crisis, there has been virtually no lending available in Ukraine. This means that if you want to buy a property, you have to pay 100% cash. It also means that apartment owners can’t borrow money to improve their properties.

The dearth of lending—in a market and country that makes most investors run away in the other direction—means that cash-rich KRER faces virtually no competition in the space.

“I love Ukraine,” John told me when I spoke to him recently. You see, anywhere else there would be lots of companies like John’s. But in Ukraine, no one else is doing it. There’s little competition because Ukraine has such a bad name as a terrible place to do business. And would-be competitors can’t borrow.

KRER consists of John and a small team with strong industry experience, local connections, and in-house knowledge, which allow the fund to purchase properties for 20% to 30% below market prices…while generating rents around 20% above average. (And that’s without borrowing—at all.)

The first fund (Fund I) has 13 proper-ties (worth around $4.4 million) under management, with average estimated gross rents of 13%-plus and projected internal rates of return of 30%. It rented every single property before renovation was even completed. So there has been no down time at all.

Over time, as Ukraine’s real estate market starts to show signs of life, the fund will benefit. Last month, John’s fund was looking at 10 properties to buy, but they were all sold to others, signalling strong demand.

In the coming weeks, John will raise money for Fund II. The new fund is a Liechtenstein-regulated, real estate-alternative investment fund.

It’s hoping to raise up to €10 million. The expected fund life will be five to seven years, with a two-year investment period and a minimum commitment of €100,000, an annual 2% management fee, and a 20% performance fee.

But remember, this is a highly speculative investment opportunity. It offers the opportunity for higher than average return—but it’s also risky. I always recommend that you don’t invest more than you would be comfortable losing, and that you do your own research and due diligence.

If you’re interested in investing in Fund II, you can email John here: [email protected]. You can also learn more about John and KRER at Krer.eu.

Note: Full disclosure, I’ve been a shareholder of the first KRER fund for several years. And (as ever), I don’t receive any compensation from KRER for mentioning it here, nor would I if you were to become an investor in the fund as an IL reader.

Editor’s Note: Kim Iskyan is the Publisher of Stansberry Churchouse Research and has lived and worked in 10 countries, including Spain, Russia, Sri Lanka, and the United States. Along the way, he’s learned something about how markets work…and what matters (and doesn’t matter) in the world of investing.Kim has been a stock analyst and research director for a big emerging market investment bank, managed a hedge fund, and sold mutual funds to private bankers. He’s also advised Fortune 50 companies on political risk and helped build stock exchanges from scratch in countries that few people could find on a map.

Stansberry Churchouse Research is an independent investment research company based in Singapore that delivers investment insight on Asia and around the world. You can learn more ways to invest in stocks, Asia, and real estate through Stansberry Churchouse’s flagship newsletter, The Churchouse Letter. This opportunity was first presented to readers of Kim’s premium global investment service, International Capitalist. For more details see: Stansberrychurchouse.com.