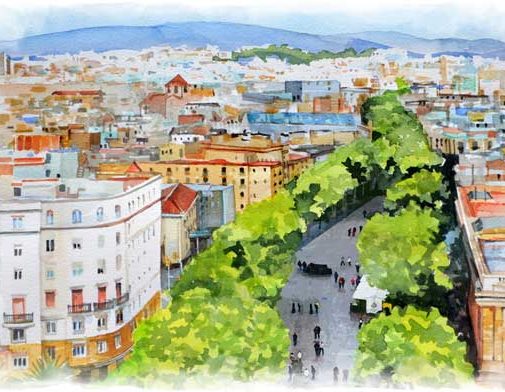 With affordable real estate and rental prices, Barcelona is a perfect place for your dream European retirement. ©Colleen Clapp

The city spreads out below you: a panoramic view over the skyline, green areas, looming mountains, and surrounding countryside…perhaps even the ocean and sunset. Your expansive private terrace allows you to soak in the sun and enjoy meals, coffee, and glasses of wine in warm weather. You’re on the top floor, so the view is unobstructed.

In the U.S., penthouse living conjures up images of hedge fund managers and Hollywood actors. You pay a premium and then some for an ultra-exclusive escape, with doorman and private elevator included more often than not. But abroad, you can enjoy “life at the top” for much less. From your perch, the noise of the city fades away and you enjoy a peaceful existence. And you won’t feel out of place in your new digs—they will be comfortable.

Whether you’re in the market to buy or to rent, plenty of options abound around the world to suit every budget.

For years now, Medellín has been on the radar of savvy expats attracted by the year-round, spring-like climate (from the mid-60s F to the mid-80s F, thanks to the elevation of 4,900 feet), low cost of living, and sophisticated nightlife and dining. This is a sprawling, big city that fills every nook and cranny of a narrow Andean valley. But it’s also a city of neighborhoods. You pick your spot and you’ll have all that you need for daily living close by.

El Poblado, a district south of the city center, is an expat favorite, thanks to all the shopping, dining, and entertainment options (check out the Zona Rosa for nightlife). It’s known as the city’s wealthiest neighborhood and is home to upper-class Colombians. But it’s still plenty affordable for expats.

The Andes highland city of Cuenca is a popular spot for expats in low-cost Ecuador. It’s a busy city of 500,000 marked by a temperate climate—it rarely gets above the 70s F and dips only into the 50s at night. The centuries-old colonial centro is full of meticulously preserved churches, cathedrals, homes, and municipal buildings, earning it a UNESCO World Heritage designation. But it has plenty of modern conveniences, too, like well-rated medical care, as well as new construction. Here your penthouse will overlook the terracotta barrel-tile roofs of the colonial quarter. And you’ll never be short of expat friends to mingle with.

A two-bedroom penthouse with views of the mountains, city, and rivers from its large picture windows is available for $125,000. A five-minute walk from the centro is a one-bedroom with a large terrace—fully furnished—for just $75,000.

Barcelona, Spain: Hip and Avant-Garde Outpost on the Mediterranean

Barcelona, Spain’s second city, is a Mediterranean port that has long been a center of cutting-edge art, music, culture, and gastronomy. Stroll along the famed La Rambla pedestrian shopping and dining district…tour the abstract architecture of Antoni Gaudí…and sample the gourmet foods of the Adrià brothers, Ferran and Albert, who have several top-rated restaurants in town…and you’ll see why. It has a mild climate and, since the city is on the sea, plenty of beaches to enjoy close by. For an affordable night out of delicious—but cheap—local foods, try hitting the tapas bars downtown.

In the heart of town is a one-bedroom penthouse for $254,940. Or you could rent a two-bedroom furnished penthouse, with city views from the terrace, for $1,708 a month.

Chiang Mai, Thailand: “The Rose of the North”

The highland city of Chiang Mai (population 1 million) lies in northern Thailand. Nicknamed the Rose of the North, it has numerous retirees and other expats who come here seeking a low cost of living and housing. History, great food, and culture mingle easily here. You can explore ancient wats (Buddhist temples), many local art galleries, and narrow back streets lit by cotton ball “fairy lights.” Be sure to hit the night markets to sample some of the famous street food, such as local specialty sai ua (spiced lemongrass sausages) and khao soi (a noodle soup with coconut curry broth).

Given restrictions on foreigners’ owning property in Thailand, it’s generally easier to rent than to buy. A one-bedroom condo in the city, fully furnished and with views of the mountains, is available for $429 a month. For around $908 a month you can get a 15th-floor condo with a rooftop swimming pool and amazing mountain views.

This seaside resort city on Mexico’s Pacific coast first caught the world’s attention when Richard Burton and Ava Gardner began their famed romance while he was there filming Night of the Iguana. These days it’s booming. Expats here enjoy an active social scene, with plenty of live music and other entertainment, and a varied restaurant scene.

The seaside malecón (esplanade) is perfect for an evening stroll when the bright tropical sun sets and weather cools. The city runs along the coast, so you have plenty of beach areas to choose from. The ideal home here is a condo on the water, with a view of the glittering Pacific and the skyline running down the coast. It’s a can’t-miss sunset, too.

A one-bedroom penthouse apartment in the pedestrian-friendly town center is $500 a month from April to October and $980 a month the rest of the year (high season). You can also buy a two-bedroom penthouse with views over the ocean over the city rooftops for $288,000.

Escape to a European Country Cottage

Picture a cozy cottage in the Old Country. In winter, a roaring fire greets you and melts the chill away. In spring, meadows come alive with wildflowers in a rainbow of colors. And you enjoy comfortable days and cool nights. In the countryside, you enjoy the best of small-town life. You know your neighbors and the merchants in the little village down the road. You have shrubs up to the windows and a flower-lined walkway to your front door.

Verdant fields on rolling hills, low stone walls, ruins of ancient castle towers and abbeys in the distance…narrow country lanes traversing it all. Imagine your cottage in the middle of this Irish countryside scene, smoke curling up from the chimney. In County Cork, just outside the medieval coastal town of Youghal, are two cottages. The first is a one-bedroom, set in one-third of an acre of extensive garden—perfect if you have a green thumb. It lists for $104,100.

In the northwest corner of France, Brittany is the perfect place to settle in your cottage with a galette (savory crepe) and cup of warming local cider. It’s considered one of the “Celtic nations,” along with Scotland, Wales, Ireland, and others. Remnants of this link are still alive—locals even play bagpipes in traditional music. The wooded valleys around the village of Huelgoat have inspired myths and legends; some say King Arthur buried treasure in the forest. A two-bedroom cottage, recently renovated and fully furnished, lists for $75,777.

Casalbordino is a regional hub in the province of Abruzzo, in central Italy. Lying inland, it’s a medieval town with a vibrant food and wine culture—it’s the perfect environment for truffles. And its beach—popular with Italian tourists—is just a short drive away.

A recently restored two-bedroom, close to the beach and the historic village of Pollutri—just outside Casalbordino—is available for $122,158. Included in the price is a large garden and 1.2 acres of olive grove.