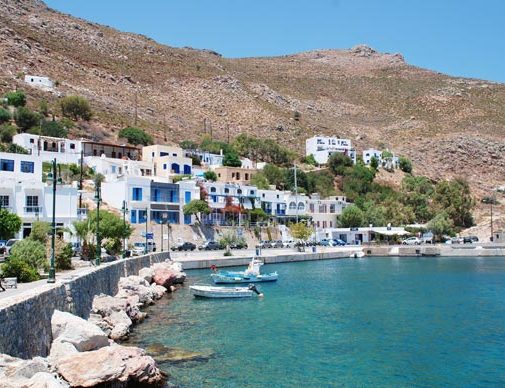 You can find a traditional Greek home on Tilos for $175,000. ©dreamstime.com/David Fowler

Growing up in suburban Vancouver, I always wanted to live in a village.

The kind of village where houses fit so snugly together that, if you’re on a hillside overlooking the sea, the adjoining staircases and tongue-and-grooved patios and eaves save you from tumbling headlong to the shore. Where you and your neighbors share lives: You awake to the same rooster, the same ringing church bells, the same trucks braking at the bottom of your hill. Where trips to the village market always take longer than planned, as there are families to ask after, babies to admire, the day’s catch to be viewed, and gossip to share. Where you give yourself time to breathe in the friendliness of the town square—the shopkeepers wishing you Kalimera (good day) as you pass, the hikers holding court under the fig trees, and the chattering children waiting at the bus stop.

This kind of quiet goodness is what awaits me every time I come home to Greece. The village of Livadia, on the tiny island of Tilos, is where my partner, Ken, and I have found our perfect European retreat.

As Greece is so far from our home in Vancouver, it didn’t seem a realistic choice at first for a retirement home. But numerous trips to Europe after retiring from teaching convinced me that, yes, this was the part of the world I wanted to visit regularly. And having a place to “hang my hat” would be ideal…particularly if it was on a sunny island, close to an international airport, well serviced by ferries, and offering plenty of opportunities to immerse myself in the local culture and the outdoors.

Tilos fit the bill. Despite Greece’s financial woes these last few years, there is only deep peace on this island. Its year-round population is about 500 people, with the same number of goats, one road, two villages, three honorary monasteries, and plenty of relics from a bygone age. Here you’ll find abandoned villages, swaths of stone fencing, a few toppled castles, and tiny stone chapels hidden in groves of oleander trees. Since antiquity, the island’s rich flora and fauna—fed by its network of underground springs—has drawn both gods and mortals to its shores. Telos, son of the sun god Helios, came looking for herbs that could heal his mother, and the poetess Erinna was inspired by its natural beauty.

With its extraordinary birdlife (162 species), rugged hills, and storied past, the island begs to be explored on foot. A typical hike has me on a donkey trail, on a steep hillside with glints of the Aegean below, and white sails and offshore islands just beyond. Paths inevitably tumble down to a secluded cove, where I can enjoy a full salt soak in the Aegean’s crystal waters. The whole experience, apart from the occasional bleat of a lost goat, is blanketed in silence.

I love that life is lived outdoors on Tilos. A typical day on the island starts with a leisurely breakfast on the patio, with fresh Greek yogurt, island eggs, honey, pastries from the local bakery, and a good morning to a few stray cats (Greece is a haven for cats!) that have found their way up to our perch. After I’ve packed a lunch, a book, and a water bottle, I’m ready for a day of exploration, which usually means scouting out a yet-to-be-discovered beach. On my way home, I’ll stop to say hello to the goats (whose bloodline is one of the purest in Greece), visit an artist whose studio I pass by, ring a Greek church bell or two, swing precariously close to the cliff’s edge atop castle walls, and source out vista-popping cafés for afternoon Mythos (a Greek beer). On the way, I imagine those who have traveled these same donkey trails before me, including Erinna 2,500 years ago. And I bask in the same aroma of thyme and sage that still scents the hillsides of Tilos.

There is a small expat community on the island, most of them retired Brits, Scandinavians, and Germans. Like us, many of them fell in love with the island’s simplicity, tranquility, and sunshine. Each year they trade their bleak northern climates for Tilos’ bright warmth. They take an active part in island life and readily include us in the goings-on, whether it’s an invitation to take Greek lessons or guided hikes around the island. One hike, to the island’s fabled Moni Agiou Panteleimona monastery, is via a cliff-hugging road with staggering views of the Aegean. Its Byzantine architecture (think hexagonal shapes with red-tiled roofs) has lasted through the ages due to its disguise as a fortified castle, deterring pirates who combed the Aegean for easy targets.

Evenings are a time to socialize, taking in local events, live Greek music, or some blues, courtesy of the expats. Dinners out are well within our budget; a few nights a week sampling Greek fare (a typical dinner of moussaka or souvlaki and a half-carafe of wine averages about $20) keeps our monthly budget well within the range of a basic Canadian pension—about $1,000. Almost all costs of living are lower in Greece: food, wine, transport (ferry, car rental, taxi, subway, train, bus), clothing, services, household and hardware items. Notably less are utility rates—I pay about $12 a month for electricity, and about $20 a month for WiFi.

Our home is a traditional Greek stone house with a flat roof, whitewashed walls inside and out, and brown trim and shutters. The kitchen has a fireplace and a window that looks out onto the village harbor, which sparkles in the sun. Our spacious bedroom has plenty of built-in storage spaces and two windows; one looks out onto the patio and beyond to the Aegean. The bathroom is outside. Or, to be exact, it is accessed via the patio. This means that middle-of-the-night calls of nature take in the luminescent night sky—a field of stars through the bougainvillea—and a ring of lights that edge the harbor.

The heart of the house is the patio, radiant with Aegean light and heat—as filtered through the bougainvillea—from sunrise to sunset. From it I have a panoramic view of the village, the harbor, the beachfront with its boardwalk, and the towering hills of Tilos. Set like jewels in the terraces of these sage-green hills are the tiny white chapels scattered around the island. Above one stands the ruins of Agrioskyia, one of the Knights Hospitaller castles that once dominated Tilos’ hilltops.

Coming from Canada in the spring or fall, we are always greeted by sunny and cloudless skies—with temperatures as high as 80 F in April and November—and the renowned Greek hospitality. The warmth with which guests are welcomed, and the generosity with which they are treated, are due to the bred-in-the-bone tradition of philoxenia: friendship to strangers.

In full season on Tilos (May through October), you’ll have a wide choice of restaurants to spoil you. Mini-supermarkets will supply you with olives, feta, Swedish cider, Greece’s resin-suffused retsina wine, and bakeries. A music bar in an atmospheric abandoned village operates from dusk to dawn. And you’ll enjoy all this leisurely, in the company of Greeks, expats, and travelers. Don’t be surprised if the shopkeepers learn your names within a week and begin to “pad” your grocery bags with gifts—like extra jars of calamari or the famous Tilos thyme honey—from their shops.

My home on Tilos officially became mine in April 2016. At first I was nervous about transferring about $65,000 (which included the price of the home, purchase tax, notary, and lawyer’s fees) to banks that only eight months earlier seemed nearly insolvent.

But when my partner and I arrived from Canada, bounding up the stairs from the ferry landing, we found that the only thing that stood between us and owning a house in Greece was the electric company. More bureaucracy to contend with. But having the right connections on the island helped us solve the problem quickly. We were set. With our house glowing with light as dusk approached, we could bask in the pleasure of owning a small whitewashed house at the top of a village, in the Greek islands.

How to Buy or Rent a Greek-Island Home

Since its debt crisis in 2012, Greece has been a bargain for travelers and homebuyers. Numerous websites operating out of the U.K., such as Apropertyingreece.com, assist foreign buyers. The book Buying a Property in Greece, by Mark Dubin and Frank Kydoniefs, is also a helpful resource. Detached modern homes (small villas) with three bedrooms, a garden, and a sea view are priced well below 2008 levels—many starting at $175,000.

If you handle the purchase yourself (as I did), make sure you hire a Greek lawyer who specializes in real estate transactions with foreign buyers. Getting the required documents—a Greek tax number, a Greek bank account, local police and government approval, legal documents pertaining to the land title, appointments with the notary ofﬁce (which handles land titles), translations—is much easier (and quicker) when you have local legal counsel.

Once you own a home in Greece, your maintenance, taxes, and other expenses are low. Flights to and from Europe during non-vacation periods remain reasonable (about $900 for a round-trip fare).

In addition to real estate for sale, homes for rent in Greece are readily available. Rentals of villas, (try Homeaway.com) at about $75 a night, are also priced well below what you would pay in North America for comparable accommodation.