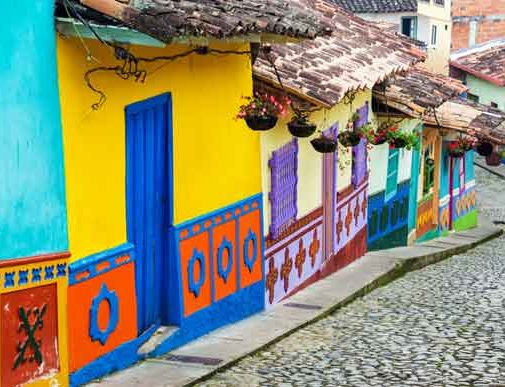 Medellín is a colorful city, from its architecture to its night life. ©iStock.com/DC_Colombia

When Aaron Brabham decided to move to the Colombian city of Medellín nearly a year and a half ago, he knew exactly what type of place he wanted to live in.

“I’m really a penthouse kind of guy,” he says. “I was looking to live in the lap of luxury for much less than I could back in the U.S. I work at home as a digital marketer, so I like to have lots of space.”

Aaron found all this in Medellín, a city where great-value living is easy to come by. He rents a magnificent 1,625-square-foot, three-story penthouse apartment in the trendy, tranquil Provenza area, in the heart of the upscale El Poblado neighborhood, for less than $2,000 a month. The third floor has a guest bedroom and a deck, with a private Jacuzzi, that looks out over the city.

“The apartment came fully furnished, right down to the towels and silverware,” he says. “This apartment would rent for close to $10,000 a month in San Diego, California, or South Beach, Florida—and that’s if you could even find something like it.”

It’s not just rent that’s affordable. Aaron lives a pampered lifestyle for significantly less than it would cost back in the U.S. “I have had a chef prepare five gourmet meals per week. He did the shopping for the ingredients, came to my home to cook the meals, and cleaned up afterwards. All this for about $50 per week,” he says. Keeping his large penthouse clean and tidy doesn’t break the bank, either. “I have a maid come twice a week. She cleans, does the laundry and ironing, and runs any errands I ask, for only $15 per day.”

Sitting on one of the balconies or the top-floor deck, Aaron enjoys the spectacular, panoramic view of the Andes Mountains while working on his computer. Being able to sit outside year-round is one of the great benefits of living in Medellín. “I love the weather,” he says. “It’s absolutely perfect for me.” Daytime highs are in the mid-70s F to low 80s F, dropping to the mid-60s F in the evening, so it’s easy to understand why he loves it.

With a lifestyle like this to offer, Medellín has started to draw expats from around the world. It’s a city on the up, and this has contributed to the fantastic nightlife Aaron enjoys.

“I love the Medellín nightlife scene,” he says. “People dress up for the evening. Drinks are less than half of what you would pay in the U.S. Also, you can eat at a white-tablecloth restaurant and have an appetizer, entrée, dessert, and a great bottle of Malbec for $80 for two people. This would easily run you $250 to $300 in the U.S.”

To fully enjoy the salsa dance clubs, Aaron even hired a private salsa teacher who came to his penthouse. For $16 a lesson, he is improving his dance moves.

“There is no need for a car in Medellín,” he says. “I use Uber to get around. It only costs $2 to $4 per ride, compared to $15 back home. Also, you can get practically everything delivered. Many things, like pharmaceuticals, are delivered free of charge. Other things—like take-out food or groceries—might add on $1 for delivery to your front door.

“I have zero desire to return to the States. I am living a life that I could never have afforded back home.”