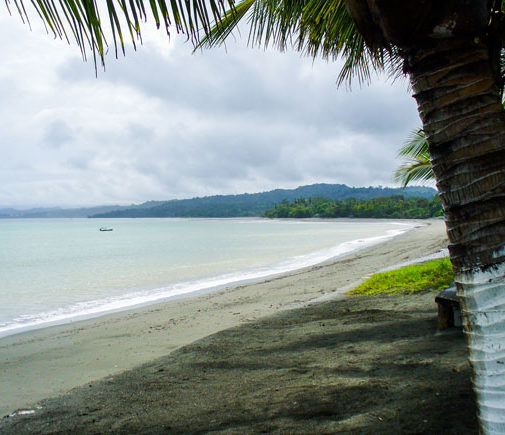 In Puerto Armuelles, expats find a welcoming community and an affordable cost of living. ©Nanette Witmer

“Winning the lottery without paying for the ticket.”

Their two-story house, with its large, ocean-side balcony, sits on an acre of prime real estate. Birds flutter through tropical flowers, as mangos drop from the nearby trees. The scent of lemon drifts on the morning breeze. From the balcony, they can enjoy sunrise coffee looking out onto the tranquil beach. The Pacific Ocean glitters in the sun, as does the water of their 70,000 gallon swimming pool. And this stunning home cost them just $150,000, all told.

“A comparably sized lot back in Miami, without the house, would have cost us close to $3 million,” says S.D.

The couple have made their perfect retirement in the town of Puerto Armuelles. “Here we see the sun rise over the Pacific,” says S.D. The beaches are long and quiet, with only the occasional fishing boat passing near the shore.

The United Fruit Company was first to develop Puerto. Now expat retirees have begun to discover it, including Bobi and S.D. “We enjoy the company of several expats who truly have embraced the Panamanian culture. But honestly, the locals are so wonderful that they are what makes living in Puerto an enjoyable experience,” says S.D. about life here.

The incredible affordability also plays its part. S.D. says that, for their household, which includes his brother Peter, $800 a month is “get-by living,” while $1,400 is very comfortable. Luxurious living, including a full-time staff and eating out regularly, would set them back about $2,100 a month.

“For $28 a month, we have internet and phone service; back home that would be closer to $80 to $120 a month,” says S.D. “You just can’t beat the affordability of Puerto Armuelles. Our trash service is a mere $3 a month. And even with the 70,000 gallon pool, our water bill is only $48 a year.” (They do receive a small discount due to their Pensionado status.)

“Compared to our life in Miami, Puerto is everything we were looking for. I spent the last few years in Miami retired. I got serious about fishing, but after a year on the circuit, I decided fishing had turned into work, and so I gave it up. Here in Puerto I fish for fun, we enjoy cooking fish, and Bobi no longer has to work. She can enjoy her days in the pool, overlooking the ocean.”

The couple knew that a retirement like this was not possible for them in Miami. “People used to work and then retire. These days in the States, you can’t afford to retire and still live a quality life. You can work your whole life and then it’s all gone. It’s not like it was for generations in the past,” says S.D.

As always, when buying property overseas you should do your due diligence and get advice from a reputable lawyer.

If you’re buying in Panama, there are some things you need to know. For a start, as a foreigner you can’t buy property that is within 10 kilometers (around six miles) of the Costa Rican border. And Puerto Armuelles lies right along this no-buy zone.

Because of this, many properties in Puerto Armuelles are either untitled or cannot be owned by foreigners. Before committing to buy, have your local attorney verify that the property is outside the no-buy zone and duly titled. You can buy untitled property as a foreigner, but this can be very risky as multiple claims or liens may exist against it.

There are, however, no restrictions on you renting anywhere in Puerto Armuelles.

Determined to enjoy their golden years as they had dreamed, they began their search for paradise. The couple investigated seven countries around the globe. But in the end, they decided Panama, with its Pensionado program (and all the discounts that come with it), strong infrastructure, and stable government, was the best choice for them. “We wanted a stable place to call home. Panama has the Canal, which is an integral part of the economy, and they use the dollar. So the choice was made simple,” says S.D.

The couple spent six years exploring Panama while scouting properties, looking for their ideal spot. S.D. wanted a place with great fishing, while Bobi was after a house with a pool. And they both wanted to be close to a beach.

After scouring the country from the Colombian to the Costa Rican borders, they came across the perfect place for them. The house is in the Las Palmas neighborhood, and at $150,000, it was well within their budget. Properties in Las Palmas are designed for the climate; each one has large windows that take advantage of the refreshing ocean breezes. “The house we found was exactly what Bobi was looking for,” says S.D. “We bought and paid for the house that moment.” In October 2011, just 72 hours after getting word that all the paperwork was concluded and the house was officially theirs, the couple were on a flight to Panama.

Puerto Armuelles was “just the right size, small, but offered all the amenities we were looking for,” says S.D. The town (home to around 20,000 people) has a variety of local vendors selling fruit and vegetables, as well as a fresh seafood market. It’s also home to several grocery stores with many familiar North American items. The plethora of fresh seafood for sale provides ample opportunities for S.D. to indulge his passion for cooking. Every year, he invites both locals and expats for Thanksgiving turkey. “Thanksgiving, well, it’s my way of saying ‘thank you’ to all the people that have made that year easier and better than the last.

“The only Spanish I knew when I first arrived was hola (hello) and hasta luego (see you later). And yet I found that the people in Puerto opened their hearts to us, made us feel welcome. I remember the early days with Daisy and Mari (two local favorites at the hardware store). We would go in and mumble and tumble through Spanish, trying to explain what we were looking for. After a good laugh at our expense, they would take us in the back of the store and let us find what we wanted. We always left with what we needed and a hug from each of them.”

After the often stifling heat of Miami, the weather in Puerto Armuelles is another added benefit. Average temperatures here range from 70 F to 88 F, depending on the time of year. There are basically two seasons, dry and wet, “just like Miami, without those couple of days where the temperatures drop into the 50s F and you are freezing,” says S.D.

Six years later, S.D. and Bobi are still enjoying every day of their retirement in Puerto Armuelles. “I told the grandbabies’ parents to get the kids passports,” says S.D. “I love them and would love to spoil them rotten, but I am in no hurry to leave Panama.”

Insider Tips for Remodeling a House in Panama

S.D. and Bobi William’s house on Panama’s Paciﬁc coast originally had four bedrooms. But after extensively remodeling it, they have created a master suite and an extra guest room. They have also installed a restaurant-quality kitchen, where S.D. can prepare food from the excellent local produce.

If you, too, are beginning a large construction or renovation project in Panama, “it is best to start the process 18 months before you start your construction,” says S.D. “Ask for recommendations from locals that you trust. Then put the workers to the test. See if they show up, check to see if their work is to your satisfaction, and that your personalities mesh. We have been using the same concrete man and the same electrician for ﬁve years now.”

When it comes to materials, S.D. says, “If it’s electrical, bring it with you. The price of electric wire is four to one [four times more expensive than in the States]. Also, the quality of some products is just not the same.” Power tools are a prime example. “I brought mine with me,” says S.D. “You can save the price of your container by just bringing your electric supplies with you.”

One beneﬁt of the Pensionado program, and something S.D. and Bobi took full advantage of, is that each of them can bring $10,000 worth of personal property into the country tax-free. To date, they have brought three containers into Panama. One was mostly construction materials for the improvements they wanted to make to their new home.

If you’re thinking of doing something similar, S.D. has some handy tips. “Start early and build shelves. Like so many things in life, it takes a lot longer to pack a container than you would imagine, and just when you think you have plenty of time, it rains.” Building shelves for the containers allowed S.D. to organize and ﬁll the space more effectively, without destroying anything.

S.D.’s last—and possibly most important—piece of advice: “Take your time and ﬁnd out where you want to be. Make sure you are happy with your location. You can change your house, you can change your garden, but you can’t change where they are.”