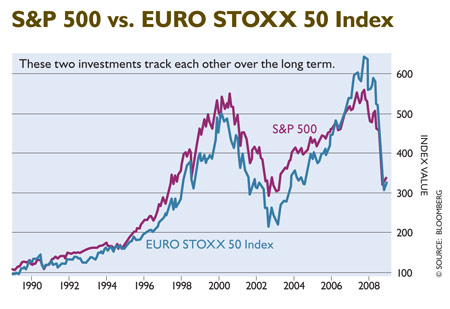 Why Buy This Breakout Market Today

European stocks are staging a major breakout this year.

But I’ve got an even more important reason to own Europe today…one that could mean triple-digit gains if history is any guide.

Let’s think about two different investments. The lines on the chart above show the S&P 500 and the EURO STOXX 50 Index, which tracks Europe’s blue-chip stocks.

On the chart, you can see how these two investments track each other in a normal situation. The returns don’t match up exactly month over month, or even year over year. But over a couple of decades, things even out. Based on this chart, over the long term, it doesn’t matter if you own one or the other. They end up with similar returns over long periods.

But while U.S. and European stocks move together over the long term, they can differ over the shorter term…

The last time we saw an extreme anywhere close to this was 2002. What happened next? A massive multi-year bull market in European stocks.

Europe is officially entering a stealth bull market. And with eight years of massive under-performance behind it, you could potentially see triple-digit gains from here.

Cocoa: An Asset to Watch

“Did you know there is an asset out there—which trades in the U.S.—that is currently trading for 50% less than it traded for 40 years ago in 1977?” writes Dr. Steve Sjuggerud of DailyWealth.com.

“When an asset is in freefall like this, investors give up on it. Speculators stop buying it. And when it gets really bad, people start betting it will keep falling. And that’s when I get interested.

“I suggest putting cocoa on your radar. If you’re looking for an opportunity in waiting, this is it.”

A Second Passport: Why You Need to Get One

“No matter where you live, you can benefit from the political diversification that comes with a second passport,” writes Nick Giambruno of InternationalMan.com.

“A second passport unlocks the door to international financial services. This is especially true for U.S. citizens. U.S. regulators have a long reach. This is why many (but not yet all) foreign financial institutions now turn away anyone who presents a U.S. passport. To be a welcome customer, you need a passport from a different country.

“Among other things, having a second passport allows you to invest, bank, travel, live, and do business in places you wouldn’t otherwise be able to. A good second passport gives you visa-free access to more countries than you had before.

“Obtaining a second passport is a fundamental step toward freeing yourself from absolute dependence on any one country. Once you have that freedom, it’s much harder for any government to control your destiny.”

“Uranium has more upside and less downside than any other commodity right now,” writes Nick Giambruno of InternationalMan.com. “While many commodities have bounced off their lows, uranium hasn’t. It’s still at or near the moment of maximum pessimism.

“Besides that, investors are terrified that uranium prices have fallen over 85% from previous highs. It’s hard to think of a market where the sentiment is worse.

“This is why I’m excited. Crises and extreme sentiment don’t scare me. They attract my interest.

“The whole point of investing in crisis markets is to take advantage of the aberrations of mass psychology and pick up elite companies and assets for pennies on the dollar. This describes the current opportunity in the uranium market perfectly.

“Simply put, nuclear power delivers immense value to its users, there’s no substitute for uranium, and production is falling while demand rises.

“This situation only has two possible outcomes: Uranium prices don’t go up. Miners have no incentive to produce. Nuclear power plants run out of uranium, and the lights go out for billions of people. Or uranium prices go up and incentivize enough production to meet the demand.

“There is no other option. Which one do you think is more likely?

“In short, uranium is my number one investment for 2017.”

In your November 2016 issue of International Living, I recommended buying shares in German bank Deutsche Bank, one of the world’s biggest investment banks.

Last year, most people ﬁgured Deutsche Bank was about to need a bail-out. I took a different view and saw the dirt-cheap stock as an opportunity…albeit a high-risk one. Now it’s up 65%. Despite that, there’s still room to double from here.

In the middle of last year, everyone had it in for Deutsche Bank (XETRA: DBK / NYSE:DB). It was massively leveraged. It was losing money. It had huge potential ﬁnes hanging over it. As a result, it would need to raise billions of euros of new capital.

My view was more positive. Yes, it was leveraged, but so are all investment banks, and leverage is reducing. The losses were temporary, and largely due to the ﬁnes. The future ﬁnes wouldn’t be as bad as feared. And the new CEO, John Cryan, was the best in the business and had a clear plan to turn Deutsche Bank around.

When Deutsche Bank ﬁrst piqued my interest last year, it was just after its half-year results had come out, and my recommendations included buying the stock. It looked like a two- or three-bagger (an increase in value two- or three-fold) over three to ﬁve years. In fact, that was being conservative.

Deutsche Bank’s stock has done well since the dark days it suffered in mid-2016. Of course, I don’t expect it to be a smooth ride from here. This was always a high-risk and medium-term play (three to ﬁve years). So it needs patience.

If you bought it last year, then I recommend you hang on. And if you haven’t bought this stock previously, then I still recommend you buy it. There’s plenty more turnaround upside for the intrepid.

There’s a great amount of Russia hysteria in the air. You see it in the media, in political discourse, and in popular conversation.

In short, Russia is too big to be ignored. Whatever politicians and the media may say, Russia is not going away. It will inevitably play an important role in geopolitics under any balance-of-power scenario.