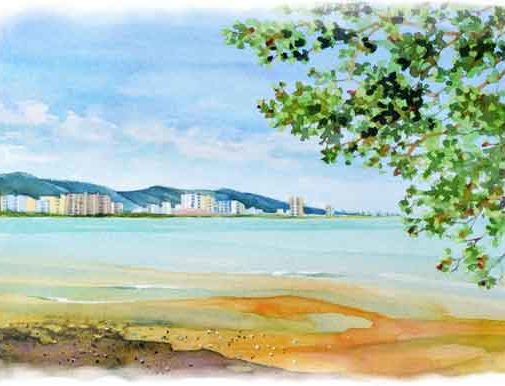 Since moving to the island of Penang, Malaysia, I’ve spent many hours enjoying its gilded temples, palm-fringed beaches, and the wonderful eateries of its capital, George Town. But there are still secret getaways to enjoy here. One of my favorites is the mysterious island of Jerejak, just a 10-minute boat ride away.

This 1.5-square-mile island was first claimed in 1800 by James Scott, a Scottish spice trader. He lobbied the British East India Company to move present-day George Town to Jerejak—to be renamed Scotts Town. (Didn’t happen: The people of George Town liked it where it was.)

In the 1860s, lepers from the surrounding areas were moved there, where they were offered accommodation and heroin to ease their suffering. Later, it was then used to house political detainees, and as a maximum-security prison from the late ’60s until the early ’90s.

Looking across at Jerejak today—a mass of emerald-green jungle rising from the Straits of Malacca—you would never guess that it had once been inhabited. Its forests are among the last places in the state of Penang where you can see the spectacular white-crowned hornbill.

Most boats will leave you off at the old prison jetty. From here, you can walk for about 50 minutes on paths overlooking white-sand beaches to reach the ruins of a church, where Jerejak’s lepers once prayed. Stroll a short way into the forests of bamboo, teak, and other hardwoods, and you’ll find lagoons teeming with fish. The island’s peak offers uninterrupted views of Penang in one direction, and of the rolling jungles of the Malaysian mainland in the other.

If you like fishing, be sure to have the local fishermen take you to the south side of the island. Here, the wreck of a sunken boat has become a reef. This makes it a perfect spot to catch fish like grouper.

Jerejak is accessible only by boat. If you’re looking for someone to take you out, I recommend Pak Tam. He speaks perfect English and his cell number is 019-470-1865 (add 01160 at the start if you’re dialing from the U.S.). Go during the week, and there’s a good chance you won’t see a soul.

From IL Italy Correspondent, Valerie Schneider: “My favorite beach is on the Cilento Coast at Castellabate, which is actually three villages.

“You can snorkel in the translucent waters at the lighthouse near San Marco or, for a day of sand and amenities, go to Santa Maria di Castellabate. The beach is right in the heart of town and you can rent an umbrella and beach chairs, play in the waves, and hit the town’s gelato shops.”

From IL France Correspondent, Barbara Diggs: “The most memorable French beaches I’ve visited are those around the exquisite Provençal harbor town of Cassis.

“I liked the seclusion of the Plage du Corton, a 15-minute walk from the town center. Surrounded by scrubby Parasol pines and low, limestone cliffs, this tiny, pebbled beach looks out at an irresistibly lovely blue-green bay and the unusual flat top of the Cap Canaille, the highest sea cliff in France.”

From IL Editor, Glynna Prentice: “One of my favorite beaches in Spain is Playa de la Concha, in San Sebastián.

“Its half-moon shape, golden sands, and blue waters make Playa de la Concha lovely and enticing. The waters can be chilly except in high summer—July and August—but it’s wonderful for strolling and sunbathing at any time of year. And San Sebastián is a frothy, Belle-Epoque delight, with some of the best tapas in Spain.”