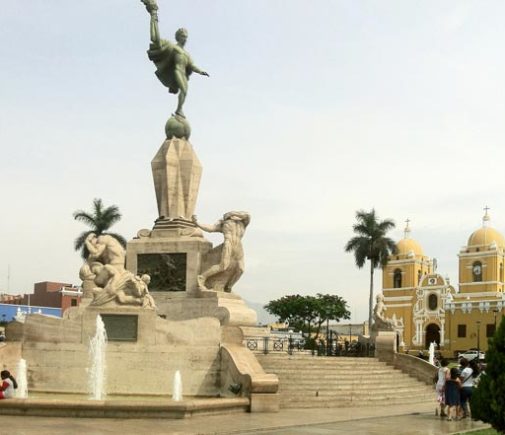 As the bus trundled along, the city soon gave way to a parched, desert landscape studded with ancient, pre-Columbian adobe ruins.

Before long, the air smelled of salt, and the blue sky dipped closer to the horizon, telling us that the ocean would soon come into view. Then, as we arrived in the seaside town of Huanchaco, the Pacific emerged out of the desert, spreading out before us in all its splendor. New modern guesthouses, private residences, and cafés sprouted up around us. The beach continued in both directions as far as we could see, interrupted only by the large wooden pier that jutted out into the water.

As my wife Nancy and I strolled around town, people practiced yoga on a grassy bluff overlooking the beach. On the sidewalks, visiting surfers carried their longboards to and from the waves. With the restaurants, reggae beachside bars, and scattered craft shops and galleries, the small town had a good vibe. It was hard to believe that a modern, vibrant city was only 20 minutes away.

As we sat beachside later in the day, watching the setting sun and sipping on our pisco sours ($4), we decided that this would be a wonderful way to spend the next year, if not the rest of our lives.

As much as we like Arequipa, the colonial city in southern Peru we now call home, we are going to give Huanchaco, this small beach town on the country’s northern coast, a shot for the coming year. We’ve already put down a deposit on a three-bedroom apartment. The $600-a-month rental includes high-speed internet, electricity, and water.

I am a small-town boy; Nancy is a big-city girl. And we both like the beach. In northern Peru, we think we may have found a perfect compromise. Huanchaco is just a 20-minute drive from Trujillo, a thriving city with all the comforts and culture we need. Because of this, expats in this corner of northern Peru can enjoy urban conveniences, small-town living, and vast stretches of beach, all within a short distance of each other. Granted, few expats are living in the area long-term, and it helps if you speak Spanish. But if you’re willing to make that small concession, a wonderful and very affordable life here can be yours.

This colorful northern city competes with Arequipa as Peru’s second largest. You won’t find a lot of expats here yet. But you will find year-round spring weather (average highs of 68 F to 77 F), exciting art and culture, a popular surfing beach nearby, and amazing food. And living here is cheap. A couple could easily live on $1,500 to $1,800 a month in Trujillo. Houses and apartments are large; three or four bedrooms are the norm in most Peruvian cities, and can be rented for as little as $400 a month.

Trujillo (population: 823,000) is a city of underrated beauty. Our first night here found us strolling toward the central Plaza de Armas (main square), passing blue and yellow Spanish-colonial buildings along the way. Many incorporated beautiful ironwork and wooden bay windows with balusters looking out at the street below. Several balconies were totally enclosed, with intricately fretted wooden shutters and lattice trellises that added to their charm.

Trujillo is a foodie’s dream. We dropped into Restaurante Demarco on our first night in the city. Located on Pizarro Avenue, the main walking street, it is popular with locals and tourists alike. A giant piece of pecado de lúcuma cake set me back $2.50, accompanied by a $2 glass of Chilean red wine. This opulent combination of cream, chocolate, and delicious lúcuma fruit is only one of the many desserts tempting passers-by. A cappuccino topped with freshly made whipped cream costs $2.50.

During our stay, we had lunch at a small mom-and-pop establishment located in one of the historic alleyways. For a starter of homemade chicken-noodle soup, followed by fried rice, chicken, and veggies, the total cost was $2. For the same price, others at the table had a whole fish or pork chops. We bought a couple of large beers next door for $1.50 each.

Apart from its great food, Trujillo is known as the “Capital of the Marinera,” a dramatic and romantic paired dance in which couples make sweeping gestures while waving around white handkerchiefs. Add in the “Capital of Culture of Peru” and the “Cradle of the Peruvian Paso horse,” and you know it’s a town with a lot to offer. We just happened to be there during the annual Marinera en la Plaza, the biggest choreographed dance event in the world, in which up to 1,000 locals, along with a few tourists, are shown how to perform the Marinera. Hundreds of enthusiastic amateurs tried to keep up with the steps being performed on the distant stage by several professionals. We just contented ourselves to watch.

Despite the small expat presence, North Americans will find many familiar amenities in Trujillo. A couple of large, open-air malls provide a good selection of brand-name electronics, clothing, and food items. TGI Friday’s and Chili’s offer a taste of home when needed.

Alison Lilian and her family moved from Canada to start their own business in Trujillo earlier this year. “I spoke to a friend with some experience living on this vast continent. After considering all the criteria—residence rules, the children’s education, health, work, living costs, proximity to an airport, city or town, and climate—we made our decision. And, of course, our mantra of ‘warm, near the sea, warm, near the sea…’ helped us with the decision.”

They are living in the prestigious El Golf area near the Trujillo Golf and Country Club. This is the nicest place in the city to rent, with many modern apartments, condos, and villas available, although prices tend to be higher. It is far enough from the city center to be away from the hustle and bustle, but still close enough to be easily accessible by taxi. Alison and her family pay $950 a month for their five-bedroom, unfurnished villa.

The private healthcare system in the city is very good and offers excellent facilities. Both public and private healthcare plans are available in Peru. There are several good private national insurance plans, including some that will accept new clients up to the age of 71 or even older. A consultation with a specialist is $30 to $40. Comprehensive plans are available for less than $300 a month for a couple.

Many expats in northern Peru prefer to live beachside, in the traditional village of Huanchaco, rather than in land-locked Trujillo. Only 20 minutes from the city center by combi (small bus), it feels like another world. As you approach the small town, the big-city smells are replaced with the healthy aroma of salty seas and fresh fish. The local market provides daily fresh fish, veggies, and exotic fruits for a fraction of what you would pay in the U.S. Here you are never more than 10 minutes from the beach, with its crashing surf, endless sand, and magnificent sunsets—all for $1,800 a month or less.

The town is famous for its seafood. Ceviche, Peru’s cherished seafood dish of raw fish cured in citrus juices and spiced with chili peppers, is believed to have originated here. You can indulge in excellent ceviche here for as little as $5.

On the bluff overlooking the small town and beach is Huanchaco’s 500-year-old church. With its vaulted ceiling, decorative exterior, and red accents, this towering white structure is hard to miss. Built by the Spanish conquistadores in the 16th century, it is one of the oldest in Peru. Wherever you find yourself in the town, the church acts as a backdrop to the colorful houses, lively streets, and many parks.

Despite an increase in tourism and expat residents, Huanchaco (home to around 40,000 people) has managed to maintain its traditions and charms. Millennium-old handmade reed boats called caballitos de totora are still used by the fisherman. This tradition dates back thousands of years to the ancient Mochica and Chimú cultures that used to live in this region.

To get to Huanchaco, you pass by the 500-acre archaeological complex of Chan Chan. Today, only a small, preserved part of the city remains and is open to the public. Fifty to 60-foot adobe brick walls, covered with intricately carved designs of birds, fish, and crabs, still remain. Smaller dwellings are still intact enough to give you a picture of life in this barren land all those centuries ago. It is easy to spend a couple of hours here, and many more if you spend time walking around the massive, unpreserved area nearby.

Huanchaco is a perfect place to relax, eat wonderful, healthy food, and enjoy the beach and its beautiful sunsets every day of the year. It has not yet been spoiled by mass tourism. In fact, the fishermen with their caballitos were the world’s first surfers, and they can still be seen riding the waves. With the reed wetlands at one end of the town set aside as a natural reserve, not much development can occur in the main part of Huanchaco.

While in town, we saw nice apartments and houses that started at about $400 a month. Airbnb is a good place to begin your search for a place to rent in Huanchaco. Many of the listed properties are available for long-term rentals for much less than the short-term rates that appear on the website.

Northern Peru: What You Need to Know

How to get here: While there are no direct ﬂights from North America to Trujillo, you can ﬂy into Peru’s capital, Lima, from the likes of Miami, Los Angeles, and New York. There are regular ﬂights from Lima to Trujillo with Avianca and Latam. The 90-minute ﬂight costs about $100. 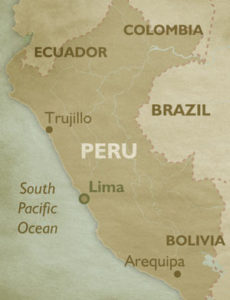 Peruvian buses are also a very comfortable way to travel, with reclining seats, movies, snacks, and drinks. Línea and Oltursa both have regular 10-hour direct routes from Lima, with tickets starting for less than $30.

Climate: Trujillo has a hot desert climate. The year has two seasons: the warm season from January to April and the cool season from July to November. The daily average high temperatures range from 68 F to 77 F, depending on the time of year.

Best place to rent: Huanchaco or the El Golf section of Trujillo.

Visas: In Peru, the retirement visa is known as a Rentista Visa. The only ﬁnancial requirement is a pension of $1,000 per month. You must also reside in Peru for at least six months each year.