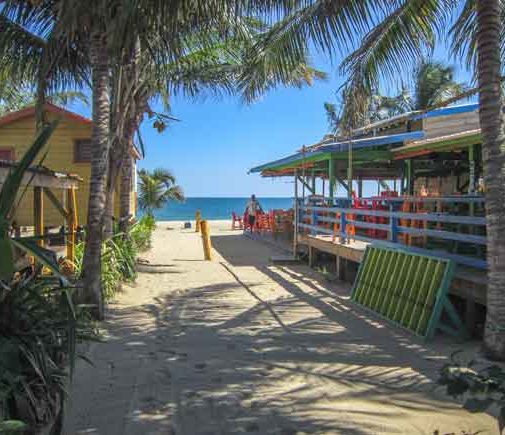 I’ve just returned from Placencia, Belize—and the opportunity there has knocked my socks off.

On my trip, I was following Placencia’s Path of Progress—a path that I discovered could lead you to double your money in one, four, or five years. I’ve identified ways for you to profit in Placencia, all of which have big upside through capital appreciation, rental income, or both. That includes one deal that could gross you a rental income of 16% a year.

I’ve been to Belize before—many times, in fact. And I liked it. Despite Belize’s being a tiny country (with a population of just 368,000), it’s got diverse landscapes and destinations. The people are friendly and welcoming. And because it’s a former British colony, the official language is English; the legal system is based on English common law, too.

For a time, Belize dropped low on my radar. But Placencia kept bubbling up again and again. It was on my list for firsthand scouting. But there was always a trip or an opportunity that seemed more urgent. I focused on other markets with more upside potential. Then a long-term contact based in Placencia came to visit me.

He updated me on the fast-accelerating pace of the Path of Progress that’s sweeping down the peninsula—infrastructure improvements, and more people, resorts, money, and tourists. And, because it’s a peninsula, this surge of people and investment is chasing this same scarce beach and waterfront land. Add to that the “overlooked and undervalued” deals in which I saw the potential for a savvy investor to double his money, and my decision was made: I put Placencia on the top of my scouting list.

I’d heard Placencia was attractive…but it was more stunning than I’d even imagined. This was my first time in Placencia—the name given both to the town and the peninsula it’s on. It’s an idyllic Caribbean destination, a 16-mile-long peninsula that’s only 300 feet across at its narrowest point. It has the feel of a Caribbean island—that really laidback, swaying palm-trees vibe.

On the peninsula’s west side is a lagoon, with the Maya Mountains as a backdrop. The Caribbean Sea and miles of white-sand beach lie on the east side. A string of uninhabited islands crouches along the horizon to the east. Stop for lunch at a little beachside bistro and you’ll pick from a menu that includes lobster tail and coconut shrimp. Your view from the terrace is of white sand, clear blue sea, and palm trees. If I had to paint you a picture of the quintessential Caribbean, this would be the place.

Despite this peninsula’s magnificence, it’s largely stayed off the radar. Placencia has escaped the attentions of big business. It’s kept its slow and sleepy Caribbean charm. That suits the expats and vacationers who come here. They tend to be low-key and adventurous. Placencia isn’t a place for an all-inclusive experience, where you lie on a lounger in a brand-name resort, tanning and drinking. People come here for outdoor activities. They go sport fishing, kayaking, snorkeling, and diving. They hike or horseback ride in the mountains, or explore Maya ruins. Boating is a big attraction here, too. It’s pretty, charming, special…and set for a major upward trajectory…

As I write, Placencia is undergoing a major Path of Progress transformation. Large-scale infrastructure projects have been rolled out. Several new projects are in process—boutique hotels, condos, cafés, and restaurants. There’s a buzz around the place that tells you it’s on the cusp of something big.

And tourist numbers are increasing—not just in Placencia, but across Belize. In most of the country, the hotels are small and boutique, or they’re owner-operated, no-frills guesthouses.

That’s where one of your opportunities lies… Tourist numbers in Belize hit an estimated 1.4 million in 2016. That’s almost four tourists for every Belizean. On looks and charm alone, Placencia should already be a prime tourist destination. Until the 2008 crisis in North America, Placencia was starting to take off. That crisis put a stop to it for a few years…but now Placencia is back on its way to where it was headed.

Historically, Placencia has stayed overlooked and off the radar. It was off-grid, too, only hooking up to electricity in the 1970s. Then pioneer expats and tourists started to come. They had to work to get here. The quickest route was a puddle-jumper plane from Belize City. The drive to Placencia was a disaster for decades. All of that kept the crowds away. But all of that has changed.

In 2011, the last section of the road to Placencia was paved. That’s a game-changer for this area. It’s now only three hours from the international airport in Belize City. Some of Placencia’s early, pioneering visitors have built beach homes here. Others started businesses—restaurants, guesthouses, and boutique hotels. Well-known film director, producer, and screenwriter Francis Ford Coppola built an upscale eco-lodge on the peninsula. And small residential communities started popping up. It was still low-key, low-rise, and small-scale development.

Because of the historic challenges to access in Placencia, and the lack of developable land, the peninsula has developed in a different way than better-known destinations in Belize. For example, unlike the popular island of Ambergris Caye, things moved at a slower pace in Placencia. The communities built here  were small in scale. But there was nothing small about the price tags. Buyers—largely North Americans—paid $400,000 to $500,000 for a typical condo on the peninsula’s beach side. The condos were large and luxurious.

Things were ticking along nicely for Placencia’s real estate sales, even at that high price point. But then it hit a small speedbump. As I mentioned earlier, just as Placencia’s market was starting to take off, the North American economic slowdown and credit crunch hit in 2007 to 2008. Buyers dried up. The real estate market in Placencia stopped in its tracks. From there, the market softened. List prices were much more negotiable and dropped by as much as 20% in some cases. There wasn’t a crash, though. Placencia never became a crisis market. The typical buyer and developer here was well funded. This was a cash market; foreign buyers had no access to bank finance in Belize. So there wasn’t a wave of foreclosures.

Today you’re not likely to buy at crisis pricing from a motivated seller. Much of Placencia’s real estate is priced at market value. Motivated sellers are thin on the ground. Owners in Placencia are in no hurry to sell.

You’re not going to profit buying a typical $400,000 to $500,000 beach condo. That’s market value. The hardest hit by the slow down were a few overambitious and over-extended developers. There was a small number of half-finished shells of projects. Smart developers chose to sit on unsold inventory and ride it out. Today things are looking up. Developers are back working on some of the shells, finishing them off. And Placencia is buzzing with tourists, snowbirds, and local professionals looking for a rental. That’s a market you want to target. And it’s one of the ways you could double your money in Placencia.

You Must Balance Risk and Reward When Buying Real Estate

There’s no such thing as a risk-free investment. Whether it’s stock market trading or real estate, you always need to do your research. And when investing in foreign property, you always have to be aware of the political risks involved. At any given time, a foreign government has the power to take your property, or even empty your bank account. That’s an extreme example. But it does happen.

There are also subtle political risks that can manifest through the movements of exchange rates—for example, Britain’s decision to leave the EU, has led to serious economic uncertainty. Since that referendum in June, the sterling has dropped by almost 20% against the dollar. In October 2016, it was the world’s worst performing currency. Further drops are expected.

Political risk is something to be weighed up with every investment. And, there’s a trade-off. Argentina, for example, has a long history of asset grabs by its government. I see it as too risky, given the comparatively high values of real estate.

Brazil is a country I’ve long been bullish about. Here again, there is signiﬁcant political risk. The country’s politicians are mired in corruption and criminal charges. It’s going to take a big effort to clean up the political arena. Regardless, I’ve just made a signiﬁcant investment of my own in Northeast Brazil. I weighed up the risks—against the buying moment that’s happening now in large part thanks to the political crisis—and decided to proceed.

I’ll be offering middle-class rentals to locals. My bet is that demand for this won’t wane. It’s important to weigh up risks like this. Brazil’s economy may turn around. If it does, I’ll be well positioned to proﬁt.

Meanwhile, Venezuela is practically being given away. The risk of war and economic and social meltdown is too great for me to consider investing. Even if it was possible to keep your real estate, you would likely ﬁnd it very difﬁcult to get your money out.

But even the most stable economies can become unstable in a short period of time.

You need to be aware of potential economic hazards…and ﬁnd the right balance between risk and reward in every international real estate investment decision.

Right now, Ronan is finalizing a deal in Placencia for subscribers of his Real Estate Trend Alert service. The only way to benefit from the special deals he negotiates around the world on behalf of his subscribers is to become one.