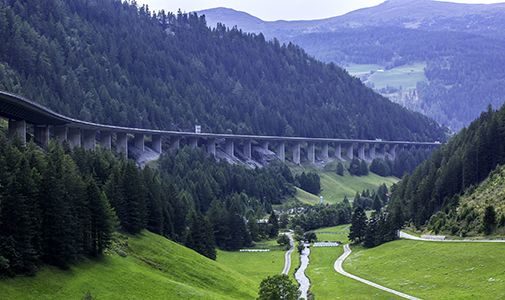 The Brenner Pass, connecting Austria and Italy, is one of Europe’s finest driving experiences. ©Dreamstime.com/WilliamMacGregor

When you’re planning a trip to Europe, choosing the right mode of transportation is one of the most important decisions you’ll make. Nothing provides access to Europe’s many hidden gems like having your own car.

Unplanned stops and extended stays can create some of the most indelible memories of your trip. And getting an early start on the road is guaranteed to help you avoid the tour bus crowds. But the key to a successful road trip is thorough preparation, and having an idea of what to expect is invaluable. Driving in Europe is not quite the same as in North America, so be sure not to get caught unawares.

Driving Is Mostly on the Right-hand Side of the Road

Fortunately for North Americans, in most countries in Europe you’ll be driving on the right-hand side of the road, just as you do at home. But not in all countries…. The exceptions are Cyprus, Malta, Ireland, and the United Kingdom, where drivers must keep left.

The Cars Are Smaller

European cars tend to be modern, practical, and compact. If you’re looking for a car to rent or buy, I encourage you to follow this trend and choose a smaller vehicle that still meets your needs. If you plan to explore the magnificent mountains that grace much of Europe’s terrain (not just the Alps—Spain, Scotland, and the Scandinavian nations also host some of the world’s finest mountain roads), you’ll be glad of every extra inch of backing-up room that a compact car provides. And, as many towns have narrow, medieval-era street plans, a small car makes a lot of sense for navigating the cobbled lanes of Portugal, Italy, France, or Spain.

Yes, most vehicles in Europe have manual transmission. But sometimes they’re different than what you’re used to. For instance, the Škoda that we drove in Slovenia placed the reverse gear in the same direction as first, with one important difference—you had to push down on the knob while shifting, to access reverse and avoid landing in first gear. Needless to say, it’s a good idea to perfect gear-shifting techniques in the parking lot rather than on an incline or in a tight space. Or just request an automatic at the rental desk (but be warned, it will cost more).

The Roads Are Well-Maintained

European roads are very well-maintained; potholes are few, and road lines are clearly marked. Be aware in advance that several countries require you to purchase a “vignette” in order to drive on their roads. A vignette is essentially a road tax, and it usually comes in the form of a small sticker placed on your windshield. These vignettes are available for purchase from most rental agencies. When we realized that one of our Slovenian road trips unexpectedly passed through Austria, an information center just before the toll section of the highway supplied us with an Austrian vignette in a matter of minutes.

Many European streets are very narrow.

Some Roads Can Become Quite Narrow

Though Europe’s modern highways are broad, many of its cities were built long before cars were invented. As a result, many streets are very narrow and should be navigated cautiously. The same goes for winding mountain roads and passes. These also can become quite narrow, sometimes leaving room for one-way traffic only. Thankfully, sharp turns on narrow roads often have convex mirrors installed, which allow drivers to see around the corners. One-way streets and bridges are often equipped with a special road sign that indicates which direction has the right of way. (The signs often show two arrows pointing in different directions. If the arrow for your side is red, expect to yield to oncoming traffic.) Learn how to use these tools effectively, and you’ll quickly feel comfortable on Europe’s narrow ways.

Most (But Not All) Road Signs Will Be Familiar

Do yourself a favor by taking a few minutes to learn about the road signs in your European country of choice. A simple internet search should give you the details you need. The good news is that most signs are either universal or intuitive: They often use pictures instead of words to impart information. However, my first five minutes of driving in Switzerland caught me proceeding through an intersection in Zurich where a Swiss sign said I should have yielded. That experience sent me scurrying to my hotel room to do the research I’ve recommended here. Also, don’t forget that distances and speed limits in Europe are in kilometers, not miles.

The Locals Drive Fast, But Responsibly

Just when your confidence is soaring and the European road stretches out welcomingly before you, prepare to be startled by a vehicle appearing in your rearview mirror from out of nowhere. As an especially cautious driver, I quickly learned to accept this as a chronic state. But don’t panic or force yourself to drive faster than you’re comfortable with. It’s probably a local who drives these roads every day, and they’ll pass you in their own time. With a little practice, your comfort level will increase. Eventually you may even find yourself eager to pass other rookie tourists who are still learning the ropes.

Editor’s Note: There are secrets to traveling well. Inside angles that experienced travelers have spent their lifetimes figuring out. Getting a good deal on your travels can make the experience even more rewarding. Imagine if you could get the best airfare every time you boarded a plane or knew where to look for the best hotel room deals. In The Secrets of the Savvy Traveler, we’ll share some insider tips to help you avoid the typical tourist blunders. All the details are here.