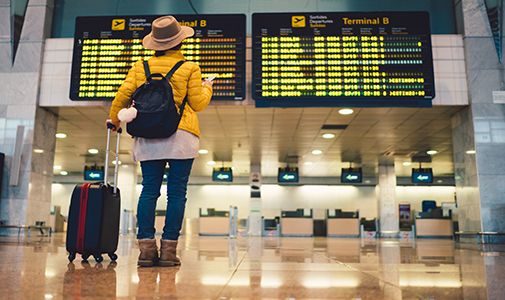 The smartphone in your pocket is capable of data connections unthinkable just 10 years ago. ©iStock/Martin-DM

I have been addicted to the internet since I first discovered it some 30 years ago. I don’t recall exactly how I heard, but somehow I learned that there was a way to connect my computer to a worldwide network.

My memory is clearer of my husband, David, scooting out of our bed and attaching the phone cord to a “laptop” that weighed at least eight pounds. I had smaller babies than that behemoth.

After typing a few grainy DOS commands, a flurry of book titles appeared. We couldn’t do a thing with the information, which glowed in yellow letters on the tiny black screen. But we were wildly excited to be browsing the catalog of the Cincinnati public library…from Nashville.

From that humble beginning, internet access has gone from a curiosity to an integral part of our life. This isn’t a problem when at home or work, but what about when we’re traveling?

Ten years ago, when we began our roving retirement across the world, WiFi hunting was an almost everyday challenge. These days it is easier to find, but a few old tricks still remain useful.

The first, and generally best, option for WiFi is the hotel. Not long ago, we had to ask for rooms near the router or change rooms because of a weak signal. Many times, a fee surprised us at checkout. That doesn’t happen much anymore, but it is still worth checking that the internet service is gratis.

Great as hotel service may be, we have a wacky habit of not spending too much time in our room. This means taking the WiFi search to the streets.

Again, the hunt has become much simpler than in the technology-challenged days of yore. Many restaurants, bars, museums, and attractions have their own service now, and recently several cities have jumped into the wireless world by providing free internet hot spots.

LinkNYC kiosks have popped up all around New York City, for instance…even underground, at many subway stations. Now the idea has spread to Seoul, Barcelona, Tel Aviv, Osaka, Perth, Bangalore, and new cities every day.

This is great. But what about when we find ourselves in some far-flung rural corner of the world?

That used to mean spending a small fortune or facing some serious cold-turkey withdrawals while going a day or two without a connection. I shudder thinking about it.

Huge advances in cellphone technology throughout the developing world, and the ability to get web access from a cellphone signal, have changed that. Smartphones and tablets can instantly attach to the web, as long as there is a cell tower in range… which is almost everywhere.

Our provider, AT&T, has a data and voice package that gives us the same service we get at home almost anywhere on the planet for $10 a day per device. Verizon’s TravelPass is similar—$5 a day in Mexico and Canada, and $10 everywhere else.

Many reviews include passwords for the WiFi.

T-Mobile and Sprint have international plans included in their standard bills, but there are restrictions on data usage (so no streaming movies or sharing YouTube cat videos).

With our iPhones, as well as almost all other smartphones, we just touch a switch and have WiFi for multiple devices. This saves money, because we can keep the cellular data switched off on any other phones and tablets we’re not using as the hot spot. These commands are all found in the settings, along with the safest way to avoid charges on any unused devices—switching to airplane mode.

For example, we have two iPhones and an iPad on our account. By using this personal hot spot feature on only one phone, we spend one-third as much. The other devices, and our laptops, can connect via the WiFi that the one device provides.

Of course, you can avoid any charges at all by downloading apps to your phone that locate free WiFi hot spots all over the world.

One of the best known of these apps is Avast Wi-Fi Finder, which can map and identify the fastest networks. Another popular option is WifiMapper. Users share updates and passwords, along with food and drink reviews, to form a database.

There are more apps, but we found a simpler option to be Yelp. We use it to check out restaurants for prices, locations, and menus anyway, so all we have to do is type “free wifi“ into the search box and, voilà, a map of nearby hot spots appears.

The website Foursquare.com works the same way, with an added bonus that many reviews include passwords for the WiFi.

Nevertheless, there are still some outposts where internet service can be hard to come by. In Cuba, we quickly learned that finding a hot spot—which was not easy to do—was only half the battle.

All internet access is controlled by the government. So we and everyone else, including locals, had to buy cards that allow an hour of time online. The service was spotty at best, and even though the cards only cost the equivalent of a couple of dollars, the cost adds up.

If that had been the case when we first discovered the web, we might never have become the internet addicts we are today.