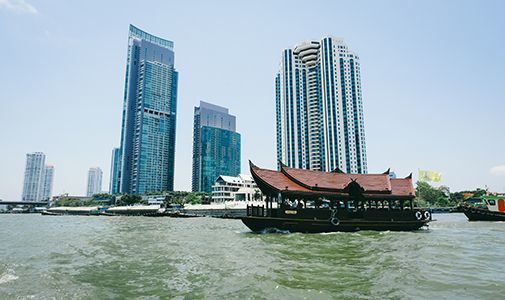 Bangkok is a heady clash of high-tech and ancient. Mike Gagne makes a fine living there. ©iStock/AnastasiiaShavshyna

Mike Gagne pretty much grew up on skis. Born and raised north of Ottawa, Canada, he spent his childhood in Edelweiss Valley, ski racing both on the Québec ski team and later as a professional for a short stint. That led to a position as the director of a ski school for several years, until he settled into what he calls a real job in the wood-flooring industry. When he began winding down his 35 years in the flooring business, though, he thought about a life away from the cold.

“My working life had me living in Montréal, Québec, Vancouver, and Seattle. All beautiful places, but I was ready to get away from the snow.” Mike’s business trips had brought him to Southeast Asia a number of times. He was entranced.

“I was coming to Asia to source products in China, Malaysia, Indonesia, and Thailand. My first trip here I really loved the culture and the people and made an effort to include a little down time on my business trips. About nine years ago I went on my own, sourcing for companies, and it made sense to live in Bangkok, which allows for easy access to the rest of Asia.”

Mike’s move to Thailand came off almost seamlessly, businesswise. He now acts as a middleman between wood-floor producers and the end client, and as long as he has his phone and computer, he can work anywhere in the world.

“I’m in the position of working independently because of relationships I’ve built up with my clients over years and decades. There is no legal statute in Thailand to limit what I’m doing. I haven’t had any hoops to jump through.”

Mike found a comfortable three-bedroom apartment in Bangkok, which he rented for 20,000 baht ($600) a month. At first, he kept his condo in Montréal, but he soon decided that Bangkok was where he wanted to be. “The condo fees, taxes, and maintenance were killing me, so I sold everything in Canada. I don’t plan to go back at the moment. I have everything I want here, including plenty of parking for my motorcycles.”

Motorcycle touring has become central to Mike’s social life in Thailand. Though he only began riding four years ago, he spends most of his time touring Thailand and Southeast Asia, racking up as many as 6,000 miles a month on his bikes.

“I’ve toured Cambodia, Laos, Myanmar, Vietnam, China, and did a trip to Mount Everest last year. I’ve been to every province in Thailand, most of them numerous times. My budget when touring is about 1,500 baht a day ($45). That’s about $15 for accommodation, $12 for fuel, and the balance for food.

I haven’t had any hoops to jump through.

“Where else in the world can you get this kind of value for money? Rooms are awesome, the food is great, the people are wonderful, and the roads are outstanding. In Canada I could spend my daily budget on lunch alone.”

Since deciding to settle in Bangkok, Mike met and married his wife Nana, who was working in a multinational company at the time. Mike and Nana live on a monthly budget of about $2,500, which breaks down to $600 for rent, $450 for food, $150 on utilities, $450 on their health and motor insurance, and about $750 for travel and touring. Mike says that he and his wife leave some leeway for surprise expenses or the occasional splurge.

Though he has insurance that would cover emergency care if he ever had an accident, Mike has been covering his healthcare costs out of pocket. “My experience with the healthcare system in Bangkok has been outstanding. Dental care is extraordinary; in most cases you can simply drop into a dental office and have an exam and a cleaning for about $25.”

When he was diagnosed with prostate cancer, he had all his preliminary work done in Bangkok, but went back to Canada for the operation. “I knew someone who knew someone, who got me through the national health maze, but if I hadn’t, I would have paid to have it done here in Thailand.”

Though he considers himself officially retired, Mike keeps his hand in the wood flooring industry as an independent agent, sourcing Asian-made products for some of his former customers in Canada. This brings in a small but reliable income to supplement what Mike calls his adequate savings.

“I could expand my sourcing business, but it cuts into my riding and exploring the country. My priorities changed after being diagnosed with cancer. Life is short, and I don’t want to spend this final stage working too hard.

“Overall, my life here is very satisfying. My wife and I enjoy the nightlife of Bangkok, which means international cuisine, movies from everywhere, and live shows and music. Riding is a big part of my life, and wherever I ride, people are friendly, inquisitive, and extremely helpful. I can’t speak Thai yet, but people are always trying to help me when I’m on the road. The beauty of this country is never-ending, from beaches to mountains and everything in between.

“Riding with my friends from all over the world has exposed me to the country’s rich culture and history. I’m enjoying life to its fullest at an age when some of my old friends in Canada are winding theirs down.”