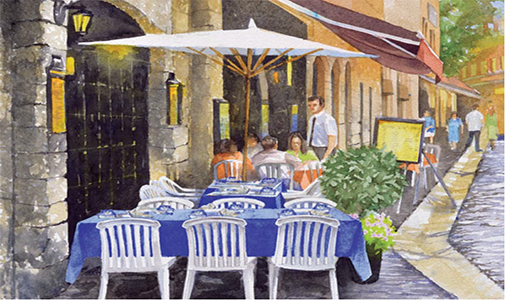 When looking at Europe as a destination, many people focus on the “big names.” Paris, Rome, Madrid, and the rest are appealing, to be sure. And definitely worth a visit. But for long-term living, especially for a would-be expat on a retirement budget, it’s preferable to avoid the glitz and glamour, crowds, and high prices that go with being in a major metro area.

Europe’s mid-sized cities offer all the same benefits, such as modern infrastructure, arts, cultural traditions (which are often stronger in smaller, less cosmopolitan spots), tasty cuisine, and more. And you’ll enjoy being in a place with lower real estate prices and a more manageable lifestyle. An added benefit: You’ll likely be able to live more like a local and connect with your community.

Considered France’s second city, Lyon (also spelled Lyons) is what many (including the famed chef and author, the late Anthony Bourdain) deem the country’s culinary capital—some say the world’s. Beaujolais wine is produced around here, for one thing, and the Rhône Valley is nearby. More than a dozen Michelin-starred restaurants offer the best in classic French cuisine, but many people prefer the hearty food of the family-run bistros known as bouchons.

Lyon’s origins date to a Roman settlement founded in 43 BC. History, good wine and food (and plenty of markets to get it in), expansive parks, and a long riverfront to stroll (along both the Saône and Rhône rivers)…what more could you ask for? A two-bedroom apartment in the well-regarded 9th Arrondissement, with quick access to the metro, is available now for $168,286. Another two-bedroom apartment, in the mostly residential 9th Arrondissement, is available for $168,277. See: Green-acres.fr and Primelocation.com.

The capital of northern Italy’s Emilia- Romagna region, Bologna has a population of about 1 million and often ranks as having one of the best quality-of-life ratings in the country. The 340-acre historic city center, much of it pedestrian-only, is meticulously maintained. Walk on centuries-old piazzas, surrounded by churches, towers, and porticoes topped by terracotta tile roofs. The University of Bologna was founded in 1088 and attended by Dante and Boccaccio. But it’s not as though you’re living in a museum.

Bologna’s lively city center is full of trattorias, sidewalk cafés, markets, and museums, and its modern outskirts offer every comfort.

And its being in Emilia-Romagna, one of Italy’s premier food destinations, doesn’t hurt, either; try the mortadella and a piadina (a typical flatbread sandwich). For $173,971, you can secure a two-bedroom apartment close to the city center. A one-bedroom apartment in a residential area is available for $136,441. See: Idealista.it.

Segovia is known for its aqueduct, 2,667 feet and 160 arches of ancient Roman architecture. It used to bring water to the city and today it cuts through Segovia’s sandstone and granite historical district—both are UNESCO World Heritage-protected. The hilltop Alcázar and its soaring towers overlooking the city inspired the design for Disneyland’s castle.

The city, about 30 minutes via highspeed train or one hour by car from Madrid, has even more to offer, including beloved meseta cuisine. A local specialty is roast suckling pig, crispy on the outside. For dessert, try ponche Segoviano—sponge cake layered with cream and wrapped in marzipan. A recently renovated three-bedroom apartment is listed at $88,691. A two-bedroom apartment is available for $102,222. See: Spainhouses.net.

It’s in southern Poland, near the border with the Czech Republic. Fitting for a place that in-the-know travelers have been calling the New Prague for years. A one-bedroom apartment in the heart of town, a few minutes’ walk from the famed Market Square, is on the market for $196,346. In a new development just outside Old Town is a two-bedroom apartment for $272,896. See: Property-krakow.com.

When did you last see a new house for sale for $30,000? In northern Peru a developer is catering to first-time home buyers by offering tiny houses located in gated communities only minutes from the city center. The company, Galilea, currently has six developments underway in Trujillo, Chiclayo, Chimbote, and Piura.

The company has 10 years of experience in the Peruvian market and has already provided more than 3,000 families with their dream of owning their own home. The company’s main objective is to “provide our customers with a quality, comfortable, excellent distribution, located in an ordered community and close to central locations in the city.”

I recently visited the nearby development in Las Delicias, a beachside residential community located about 10 minutes from Trujillo, the “City of Eternal Spring.” Here, construction has begun on the Sol de Las Delicias II gated community. I toured the two model homes on display.

There is no doubt these homes are small, at only 484 square feet (one floor) and 968 square feet (two floors). But each house features two bedrooms. And the larger unit squeezes in three bathrooms. Only minutes from a nice little beach and very close to Trujillo’s city center, they would be ideal for an inexpensive winter getaway or long-term living.

Divide and Gain in Italy.

The new frontier in Italian real estate is frazionare, or subdivide, according to Il Sole 24 Ore—a respected Italian financial journal.

Buying a large apartment or house and dividing it into two or three smaller apartments will immediately add value to the home. It will also reduce your overall property cost, by letting you recoup some of your investment euros in the resale, all while retaining a home for yourself, too. Not all properties are suitable, due to floorplan restrictions, historic registry limitations, or building codes. But if the structure permits it and pertinent renovations can be done, you can profit from selling or renting the spare apartments you’ve divided.

The trend has been gaining popularity in cities like Milan, Turin, Rome, and Naples, and it’s starting to spread to smaller cities, too.

The article states that the frazionare tactic yields best returns in a town center. Just be sure you have a good contractor, and a lawyer to make sure your divided properties are registered correctly, so that you’ll be able to sell them afterward.— Valerie Fortney-Schneider, IL Italy Correspondent.

Phuket is one of Thailand’s major healthcare hubs. So it’s no surprise that developers selected it for Kamala Senior Living, the first residential community of its kind to focus on health-minded foreign retirees.

The coastal community will consist of 200 condo units, along with 30 villas. It has been designed for independent seniors who plan to continue living an active lifestyle, yet with all the benefits of having dedicated medical and wellness centers at hand. Kamala Senior Living is within the luxurious 440-acre MontAzure Phuket development, stretching inland from the beachfront on the island’s west coast, with sweeping views of Kamala Beach and the surrounding area.

Residents will have access to a range of services and amenities focused on medical care, fitness, and wellness. They’ll also have access to the amenities at MontAzure. The center is scheduled to open in late 2020.
—Steven King, IL Cambodia Correspondent.