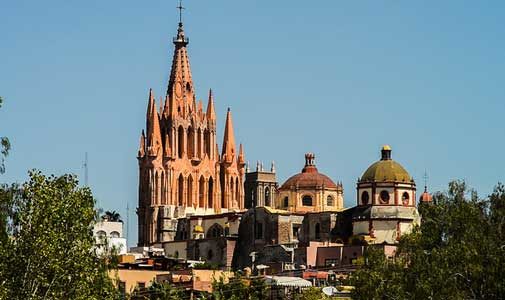 “Jump, and a net will appear.” In San Miguel de Allende, Jane Dill proved the truism.

Your world expands when you become an expat. Since my husband, Mike, and I moved overseas, the boundaries of our personal development have constantly expanded. Integrating into different cultures and learning about their traditions and values, is one of the most satisfying aspects of living abroad. And immersing ourselves in the cultural traditions of the countries we’ve lived in has pushed us to grow.

We’ve lived abroad full-time for the last 11 years. Our first stop was Ambergris Caye, Belize. We spent 10 years there. Then, in May 2018, we moved to San Miguel de Allende, Mexico. Mexico’s brand of Catholicism incorporates many Mesoamerican traditions. Like many conquerors, the Spanish eventually managed to convert the indigenous people to Christianity. But the only effective way to do so was to allow the locals to keep some hallowed traditions. Thus, we have firecrackers in the wee hours of the morning during the November Day of the Dead celebration. The locals say that it’s to scare off the evil spirits—one of those indigenous beliefs that carried over—but a lot of it is just gleeful exuberance, too.

Mexicans here in San Miguel accept the balance between life and death. Their ancestors believed that, once a year, the deceased returned to earth to visit and offer advice to loved ones. During Día de los Muertos, Mexicans pay homage to departed family members and friends, and visit their graves.

During this holiday, people build altars to entice their loved ones’spirits to return to earth. Families place their relatives’ favorite foods, drinks (including alcohol), and gifts on the altars, which are often decorated with photos of their loved ones. Some families carry the altar to the cemetery, then spend time together there, praying, communing with the deceased, singing, and reminiscing. It’s a healing practice, and one that many expats have embraced. It certainly feels healthier than our own buttoned-up approach to death.

We’ve increased the richness of our lives.

It’s good to take on new traditions, especially when they fill a gap your own culture leaves empty. After moving abroad, we began to learn about, appreciate, and embrace other cultures and traditions. As our horizons have grown, so have our mindsets. You learn not to sweat the small stuff. When you boil it all down, most things are the small stuff.

Living in a new place, it’s natural to compare the cultural norms there to those of your mother country. During this process, we’ve come to appreciate not just the celebrations and special events of our adopted homes, but also to understand the local perspective on life. Often, this has proved to be the real difference, not the costume parades or firework displays.

For example, on our first visit to San Miguel, I was impressed by the high levels of civility among the locals. In general, Mexicans put a premium on civility and respect, but in San Miguel the bar has been set high. You’ll find few stop signs, and even fewer marked crosswalks in the town. There’s no need here. When I step off a curb, cars stop. At intersections, they take turns passing. I’m grateful for the level of courtesy that’s the standard here.

One of the first things we learned during Spanish classes was the importance of the unwritten code of la cortesía—courtesy— in Mexico. Mexicans not only hold respect and individual dignity in high regard, but also trust, family and friends, and free time. On the weekends we see families together in town and in the parks, smiling, laughing, and playing together. It’s a cultural difference of the nicest kind.

Local traditions continue to evolve and include new elements. In the early 1900s, a famous Mexican cartoonist, José Guadalupe Posada, created the satirical skeleton “Catrina.” His creations poked fun at certain wealthy, nouveau-riche Mexicans who dressed like European aristocrats, and his cartoons laughed at the hubris of the living. This irreverent tradition quickly took hold. Skulls and skeletons have since been integrated into Mexican art.

A recent spin-off in San Miguel is the Catrina Parade. San Miguel’s residents dress as skeletons, the Grim Reaper, and other ghoulish personalities. Expats, too, have embraced this satirical tradition. They don a costume, and march in the parade. It’s gratifying to see the many international residents participating in local traditions. At times, they even manage to enhance those traditions with a new spin.

In Belize, I observed similar patterns, albeit less common. Belize—a true melting pot—is home to many diverse races, religions, cultures, and traditions. Each group maintains its cultural integrity through its traditions and rituals. But during Belize’s most notable holiday—Independence Day on September 21—everyone celebrates together. The major towns hold noisy, colorful parades that go on for hours. Expats often take part.

I was invited one year to join one of the Independence Day groups. We each donned a hot pink costume and themed headbands, and danced through the streets of San Pedro for hours, singing to the throbbing drum beat of Belizean tunes, helping to celebrate their fledgling democracy.

It’s been life-enhancing to experience and embrace other cultural traditions. But we haven’t rejected the traditions we grew up with. Far from it.

We’ve just increased the richness of our lives by adding traditions from our adopted home countries. And that’s the sort of richness we can all enjoy.