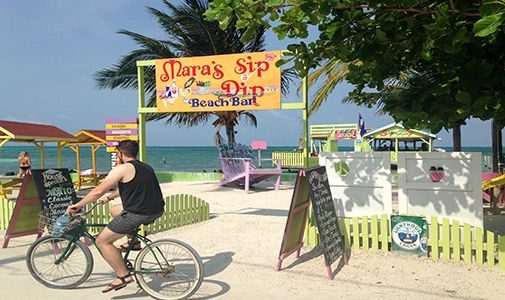 Life in Caribbean Belize is as busy—or as laidback—as you want to make it. ©Ann Kuffner

Kenny Guinn loves to laugh, even at himself. The owner of a thriving laundry service in tropical Ambergris Caye recalls telling his friends he’d bought the business:

“They pointed out that I’ve never liked doing laundry. My reply was, ‘Yes, but nobody’s ever paid me to do it before.’”

Ambergris Caye is a fascinating, fun island off the coast of Belize, popular with both expats and tourists. The white sands, palm trees, and extensive coral reef just offshore have all contributed to its reputation as one of the most relaxed and enjoyable destinations in this fast-developing country on the Caribbean Sea.

The rapid growth of Belize’s tourism economy in recent years has led numerous high-end corporate hotels to invest in Belize for the first time. Until recently, the country, with a small population of under 400,000, hasn’t needed much in the way of infrastructure. And the nature-loving free spirits (in the laidback coastal resorts you can go barefoot almost anywhere, and many people do) who move here to live haven’t made many demands on the consumer economy.

But lately, Belize has arrived at a tipping point. Entrepreneurs and businesses are now needed, and the population to support new business has grown. It’s an exciting time. A visit to Ambergris Caye will fill any businessperson with ideas about providing for the island’s needs, both basic and niche. This is a location where many expats have opened North American-style businesses with a local Caribbean twist. There are boutique hotels in attractive pastel shades, sports bars, beachfront cafés, and food trucks serving lobster pies for $2 or barbecue plates for less than $5, all in a warm, laidback neighborhood.

Ambergris Caye is the most upscale of Belize’s destinations. But even so, you can pick up a condo rental in the lagoon-front Mara Laguna complex for $875 a month. With happy hour beers going for $1.50 and a plate of wings for less than $1, it’s not hard to make Ambergris Caye fit your budget.

Kenny, 56, comes from Texas and had a background in printing. He considered many sectors before settling on buying the laundry service on the island for his day job. “I did a lot of research and made many trips here to look at different businesses and opportunities. The laundry just happened to be within my timeframe and financial wherewithal.”

Entrepreneurs are now needed in Belize.

His laundry service has had a successful run for years now. This success has allowed him to pursue his first love—and the niche service that has given Kenny a following among the island’s expat population. He dreamed of a job where he would be paid to provide karaoke to bars and restaurants in the tropical island atmosphere. “Within a year of buying the laundry, I bought the sound equipment for a karaoke business.”

Now Kenny’s days are full, busy, and happy. “I open the laundry at 8 a.m. sharp, Monday through Saturday. And that’s where you’ll find me most of the time. I do break for lunch at home every day (my condo is a mere 500 paces from the laundry). Then it’s back to close the laundry at 5 p.m. It’s pretty boring, but it’s way better than commuting through Dallas traffic.”

The laundry is the part of Kenny’s life that pays the bills and puts food on the table. He’s a canny businessman who has found an undemanding way to make a living in the island paradise he now calls home. But it’s not where his heart is. “Several nights a week, I head home to load up the karaoke gear. I do karaoke in the evening at bars, restaurants, and different venues around town. This is by far my favorite part of living and working on the island.”

For those thinking about opening a business in Belize, there are some skills that set apart those who are successful at it here. “I have many years’ background in both production and sales,” Kenny says. “So I think that my ability to handle both aspects of the business has helped me immensely here. Laundry isn’t rocket science, but there is a process to the efficient operation of the business. Customer service is tremendously important, as well, for customer satisfaction and retention.”

Kenny’s goal in the future is to focus on just the karaoke business, and his hard work and smart choices are getting him there. Still, he always takes time to make sure he is enjoying his island life, which is an important part of Belize’s go-slow culture.

Kenny also values the connections he’s made, and the planning period he gave himself to make smart choices. “My advice, if you’re considering Belize, is to visit often and for longer periods of time. Visit different parts of the country and find what’s most comfortable for you. Meet people who’ve made the move. Talk to locals and especially expats. Find out what they did wrong, what they did right, and what they might do differently if they were given the chance. Life here is not for everyone. But if it is for you, there’s no better place to be.”

Editor’s Note: If you want to live the laidback Caribbean lifestyle of your dreams, then Belize could be the country for you. This relaxed, island-rich nation has it all: clear, blue skies…long, white, sandy beaches…warm, gentle waters lapping at the shore…a soft breeze swaying the palm trees overhead… and English is the official language.

If you feel your dream life could be in Belize, then you’ll want to check out our in-depth guide, Escape to Belize. From finding a property…to obtaining your residence visa, you’ll learn how to invest, travel, live, retire, and start a new business in one of the last affordable Caribbean havens. Get your copy here.