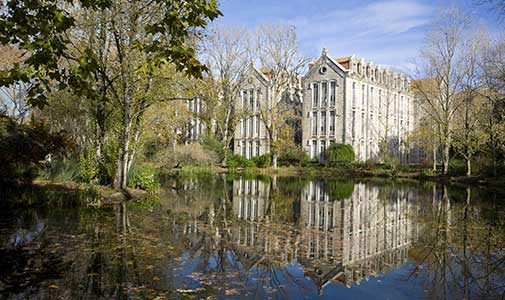 As we sipped wine at the corner café with friends, my husband turned to me with a big smile on his face and exclaimed, “We really live in Europe. Can you believe it?” Just then the waitress came over with the check, which our friend took. “I’ve got this one,” he said. Two wines, one beer, and a coffee, for a total of just $4.50. “Wow,” our friend said. “I’m really going to hate to go back to the U.S., where just one glass of wine costs more than this entire bill.”

When my husband Clyde and I first left the U.S. to retire, we headed to Panama. For five wonderful years we enjoyed warm, tropical breezes, made plenty of new friends, and achieved a basic understanding of Spanish. We were enjoying our new life and thought we would stay there forever, until one day we took a trip to Europe.

We fell in love with the romantic notion of living in Europe. But what country did we want to live in? And could we afford a European lifestyle on Clyde’s small firefighter pension?

Last year, we visited Portugal for the first time. We knew little about this small country in Western Europe but were eager to find out more. Some friends from the U.S. had already made the move and were eager to tell us about their new life there.

We soon learned that Portugal is one of the easiest countries in Europe for U.S. citizens to obtain residence in. And Portugal allows foreigners to access its topnotch public healthcare system at little to no cost, once they become residents.

Typically, applying for legal residence abroad begins in one’s home country. But since we were already residents in Panama, we began the process at the Portuguese consulate there. Just a few months later, our plane touched down in Lisbon Airport, where we began the next chapter of our lives. We had absolutely no idea where we wanted to live. One thing we knew for sure was that we needed a furnished rental, since we had no desire to buy another house at this point in our lives.

Our new place eventually found us. Almost a museum, the three-bedroom, one-bathroom home is furnished with cherished antiques and is full of personality. Complete with a cozy fireplace, large balcony, and spectacular views of the countryside, it’s a gem. We have access to a large courtyard that leads to vineyards dripping with grapes, free for our picking. The homeowner also grows an assortment of other vegetables that we are encouraged to enjoy. And the best part is the price—just $400 a month.

Although our home is in the countryside, it is located just a 10-minute drive from the city of Caldas da Rainha, in Central Portugal.

Caldas, as it’s known locally, was founded by Queen Leonor in the 15th century. She was passing through the area when she spotted a group of peasants bathing near the roadside in foul-smelling waters. Curious, she stopped to inquire why they were soaking in the vulgar solution, and they told her of the water’s miraculous healing powers. The queen tried the water and was so impressed that she ordered a hospital to be built around the thermal springs. In 1484 the hospital opened to the public and the town of Caldas da Rainha was born.

In Portuguese, Caldas da Rainha translates as “baths of the queen,” and the springs are still a working medical institution today.

With a population of around 50,000, the small city of Caldas, as it’s known today, includes a cobblestoned center that hosts a daily produce market. Nearby is a circular plaza that features a church and town hall. Shops, restaurants, cafés, and bakeries are just a short walk away. In contrast, the town also features a modern mega-mall, complete with a cinema that shows the latest movies in English for just $4.50. A bowling alley, gyms, museums, clinics, a hospital, and hypermarts (bigger, and with more extensive offerings, than supermarkets) take care of our every need.

We can enjoy a meal for two at a variety of restaurants for $11.50 or less, including drinks. As for our other expenses, we obtained private health insurance for a cost of $265 a month for the two of us. To keep fit, we joined a large gym that comes complete with an assortment of classes and ongoing dietary and fitness counseling for just $66 a month for both of us. I opted for private, twice-weekly sessions with a personal trainer, at an additional cost of $70 a month. This is half of what I used to pay in the U.S. Our internet, satellite television, landline phone, and two cell phones run us just $80 a month.

While our knowledge of Spanish has helped a little with learning Portuguese, we still have a long way to go. But many locals do speak English, making our transition here much easier than our move to Panama was.

And the Portuguese people are some of the friendliest, most welcoming people we have met anywhere in the world. They will go out of their way to help you, regardless of language.

While there is a large community of foreigners throughout the country, most are from Europe and the United Kingdom. But we have already made friends with some other North Americans and are loving our new life, living as Europeans here in Portugal.

Editor’s Note: If you like the idea of living overseas…enjoying a bit of adventure…and saving money while you live a more relaxed, fun, fulfilling lifestyle…but you aren’t sure about where you should go or how to actually get yourself there and settled in…then this could be perfect for you. At our Fast Track Your Retirement Overseas Conference, being held this April in Orlando, Florida, you’ll get all the advice you could ever need on life overseas. Get all the details and book your seat today