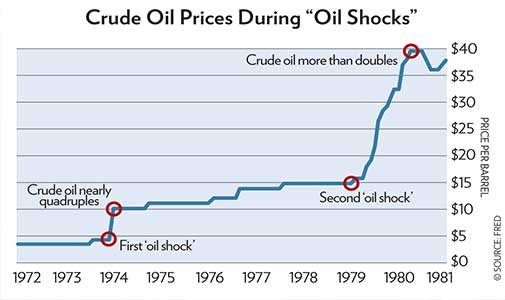 A Massive “Oil Shock” Could be Coming

A war between Iran and Israel (and its U.S.-led allies) would wreak havoc on the oil market. That’s because Iran holds a very powerful card…

Iran could effectively shut down the Strait of Hormuz, the narrow channel connecting the Persian Gulf to the open ocean.

Tankers moving oil from Iraq, Iran, Saudi Arabia, Qatar, Kuwait, and the United Arab Emirates all have to pass through the strait. That translates into roughly 35% of the world’s oil traded by sea.

Nearly $2 billion worth of oil passes through the Strait of Hormuz every day. It’s the most critical oil choke point in the world.

In the event of an all-out war, Iran would quickly shut down the Strait of Hormuz.

Iran could seal off the Strait with sea mines and asymmetrical warfare techniques for at least a month before the U.S. could reopen it. If and when a war with Iran happens—even if there’s only a whiff of it happening—investors should expect a dramatic oil shock.

Of course, we’re not cheering for a war. Nevertheless, the odds of a big war in the Middle East starting soon are high. That means a sudden spike in the price of oil is likely.

There’s a good chance of outsized returns and soaring dividends in select oil stocks in the weeks ahead. I recommend positioning yourself for big profits now.

Soybeans Could be the Deal of 2019

According to the U.S. Farms Report, agricultural economist Wally Tyner of Purdue University said the U.S. could lose 9 million acres of soybeans permanently if the current trade war isn’t settled.

That’s because Brazil will take that much more of the market share. China turned to Brazil after cutting off its imports from the U.S.

Not everyone in China agrees with that plan. China’s former chief trade negotiator, Long Yongtu, spoke out against bringing soy into the trade war.

Yongtu led the trade negotiations as China joined the World Trade Organization in 2001. As he told a conference audience recently: “China is in dire need of soybean imports, so why did we pick out soybeans from the beginning?”

He believes that agricultural products should be a last resort for this kind of negotiation.

He also said something that resonated with me: As long as both sides send politicians to negotiate, they won’t ever reach a deal.

As you can imagine, soybeans hit their lowest price in a decade. However, from great pain comes great opportunities.

China still needs a lot of soybeans. And the soy price has hit a low we haven’t seen since the financial crisis. Fewer soybeans will be planted in 2019 thanks to this event.

Things can’t get much worse for soybean prices…and when they can’t get any worse, they have to get better. This could be the breakout sector for 2019.

Today, there is a shortage of nickel. There just isn’t enough nickel being mined globally to meet demand. The metal flashed onto a lot of investors’ radars when Tesla’s CEO, Elon Musk said that the batteries used in Tesla’s electric vehicles are really reliant on nickel, and to a lesser degree, graphite.

Demand is running ahead of supply…and the shortfall is going to deepen as the EV market, which uses nickel for high-performance batteries, continues to grow.

And going further ahead, the situation gets even more dire. There simply aren’t many new mines on the horizon that can meet the surging demand for nickel in batteries— especially as people like Elon Musk, cram even more of this metal into each unit they produce.

That supply crunch means the potential for big runs in the nickel price—the kind that will cause a spike in nickel stocks. If you haven’t already, now is the time to add some nickel exposure to your portfolio

I’m used to delays in paperwork— but 136 years to get your permits in order? That’s how long it’s taken for Barcelona’s famed La Sagrada Família church to get its building licence.

Construction on the modernist masterpiece started in 1882, yet it was only a couple of months ago that the church trustees and the city council finally agreed on a settlement of the issue.

That’s an extreme example by anyone’s standards, but it’s a cautionary tale that’s relevant to all of us. Even when it’s on your back door, the permitting and paperwork required for real estate development can be difficult to understand. When you’re developing overseas, things are complicated further by foreign languages and different ways of doing things…

Get an attorney on board to help you.

That’s why it’s so important that you get an attorney on board to help you do your due diligence…someone who knows what paperwork is needed, how long it will take to get it, and how to protect you if one or more pieces are missing.

The Sagrada Família is set to be finally finished in 2026. That’s only 143 years since the Catalan architect Antoni Gaudí began working on it.

When you buy pre-construction, delays are pretty common—although they’re not usually as extended as 143 years. Your attorney can make sure your purchase agreement covers you in case of excessive delays, usually with a one-off or monthly penalty that the developer will have to pay once they are past the delivery date (plus a grace period).

A Transformational Market on the Far, but Profitable, Frontier

If you had bought shares of Apple as it launched the iPhone in June 2007, you’d have made five times your money in five years.

Or…if in the autumn of 1995, you’d bought a basket of shares in the newly launched Russian stock index—not long after the end of the Soviet Union—you’d have been up nearly 470% in under two years.

Of course, a flashing green “BUY NOW” light didn’t accompany these transformational events. “Transformational” is easy to define in hindsight. It’s never obvious at the time. I recently spent a week in a country that could be at the cusp of a similar kind of transformation. It’s far off the radar of most investors…but so was the iPhone in 2007.

It’s far off the radar of most investors. Like the iPhone was in 2007.

Uzbekistan is a California-sized country in Central Asia with 33 million people and a gross domestic product (GDP) that’s 2% that of California. Its leader, Shavkat Mirziyoyev, has launched a comprehensive program to reform the post-Soviet economy, increase transparency in government, improve the business environment, reduce corruption, and promote investment.

Uzbekistan is at the far end of the adventuresome spectrum of frontier markets. And frontier markets are littered with well-intentioned reformers who start strong but give up in the face of pressure from entrenched interests, bureaucracy, inertia, and their own personal issues. But there is a momentum in Uzbekistan that is hard to ignore.

If we waited for the reform process to really get underway…if we waited for the iPhone to prove itself… then the opportunity would have already played itself out. Uzbekistan is like a time warp into 25 years ago—and a lot of its assets are priced accordingly. So if the country isn’t on your radar, it should be.

Swiss Banking Is Alive And Well

A recent dispatch from the Reuters news agency announced that Switzerland had officially ended bank secrecy. But to paraphrase Mark Twain, the rumors of this death are greatly exaggerated.

What Reuters failed to mention, though, is that for virtually every purpose other than tax and serious criminal activity, bank secrecy in Switzerland remains intact. And Switzerland is determined to enforce it. All in all, if you’re looking for a secure place to stash some of your wealth outside the U.S., and you want it in a country that takes financial secrecy seriously, Switzerland is worth considering.