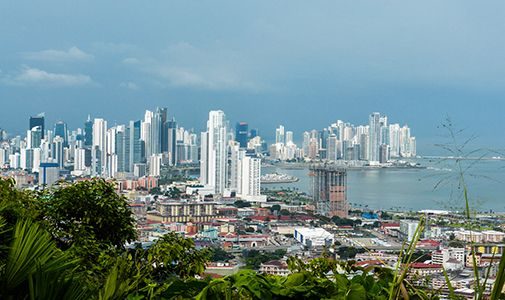 “No, I’m definitely not crazy.” My family didn’t look convinced. It was 2004 and I’d just told them I was going to Panama. “Why would you want to go there?” they asked. It was a several hours’ plane ride and somewhere none of them had ever been. At the time, all they knew about Panama was that it had some jungle and a massive canal.

But I knew there was a lot more to this little country of fewer than 5 million people than a waterway or jungles; I knew there was serious opportunity to profit from the right real estate buy in Panama City. And I was proven right. I made serious profit by getting in at that buying moment—$72,370 in a short time. That window of opportunity was short, but it was worth some serious upside to anyone who got in before it closed.

Panama is small, but it’s become a powerhouse.

Now I’m calling it again: the next great moment to buy in Panama City. And it’s set to be even greater than the one I found more than a decade ago…

Supercars roaring past…brunches of eggs Benedict washed down by champagne… sparkling jewelry dripping off wealthy necks and wrists…and malls packed to the gills with designer fashions: Modern-day Panama City is the picture of a cosmopolitan city—one I’ve come to think of as “Baby Singapore.” Or another Hong Kong.

The city is an iconic series of shiny glass high-rises, running along the shores of Panama Bay.

These skyscrapers say a lot about where Panama City is in its development trajectory: There’s a global ranking of cities based on the number of skyscrapers they have. Panama City comes in at #20. That’s three places above Miami, at #23. Panama City has an estimated 67 buildings of 100 meters (328 feet) or more. Fifty-two are higher than 150 meters (492 feet).

Here’s the thing, though: The first tall building in Panama City, the Miramar hotel, was only built in 1996. In comparison, the first tall building in Miami went up in 1925. In other words, what took Miami 93 years to achieve, Panama City surpassed in just 22 years; the city is developing at hyper-speed. A concentration of high-rise buildings is usually a sign of a lack of developable land. That’s certainly the case with Panama City. And that lack of developable land is going to become more acute.

Panama is a busy hub—one that’s growing with each passing year. It has a lot of advantages that are prompting that growth. It has that huge canal, of course—the same one my family immediately thought of when I mentioned the country’s name. It flows through Panama City. But there’s more to it than that. As with Hong Kong and Singapore, it sits on the edge of a large, economically robust region. Panama is a small country compared to some of its neighbors, but it’s become a powerhouse.

Panama is a logistics center. In less than two years from when it opened in mid-June 2016, the new canal locks hit their goal of 3,000 (massive) Neopanamax vessels—ahead of target. The canal is a major money-spinner for the country. Annual revenues from it are around $2.8 billion and growing.

Around the canal, a whole industry of logistics, shipping, and maritime registration has developed.

When I first visited Panama City in January 2004, it had an older—almost regional backwater—feel. But, year by year, that lessened, and the centuries-old architecture was relegated to a small “old town.” In its place are those glass-front skyscrapers reaching into the clouds. Now it has the feel of a Hong Kong or Singapore, one of those internationalized, global hubs.

When I made that first visit in 2004, Panama City was right at the beginning of its upward trajectory.

The city was beginning to pull in buyers from North America. That was helping to fuel real estate development. That’s the kind of city this has become. In times of economic troubles elsewhere, foreigners come here to park their cash. That’s because this is a democratic, stable, transparently governed country with favorable banking and offshore regulations for foreigners. In the first years of this century, that attracted a lot of North Americans. (Now a lot of Colombians and Venezuelans are buying here, too.)

It made for an incredible buying moment. The city was about to take off… and developers were paying attention. They targeted a growing market that was a mix of upper-middle-class locals and foreign investors. Those developers put their focus on smaller, centrally located city condos, with luxury finishes and an open-plan layout—something that, up until that point, had been missing from the market.

They sold like hotcakes. And they’re how I first made a major real estate profit in Panama City.

In 2005, smaller (typically one-bedroom) luxury condos were selling for as little as $145,000. That was a no-brainer, unheard of in any fast-emerging capital city, and an opportunity so good that I acted immediately. I bought one of these one-bedroom condos pre-construction for $147,630. I sold shortly after completion for $220,000. My gains: $72,370.

But by early 2007, when the first of these smaller condos was finished, values had more than doubled, from an initial pre-construction price of $100 per square foot to an average of $250 per square foot. That’s how fast a real estate market can move…and how quickly you have to move to take advantage of a buying moment.

The opportunity then was over. I knew I needed to bide my time for the next great buying moment. Now it’s here. Panama City is on the cusp of a major new wave of development.

During that first wave of development, which I witnessed, housing in Panama City spread far and wide. It went into the countryside east and west of the city. A tide of new buildings swept in—hotels, condos, and businesses. It led to that shiny high-rise skyline I described before.

Then, as I watched, the market for those condos was hit by a double whammy. First the rapid rise in preconstruction prices pushed investors and speculators out. Then the economic crisis of 2008 struck. That dried up the pool of North American buyers, who made up half the market for these condos. These properties were never affordable for the average Panamanian, so developers couldn’t simply switch to courting a local market.

There wasn’t a spectacular crash in Panama City. (In fact, Panama’s economy carried on growing strongly. While much of the world was in crisis, with companies laying off workers, unemployment in Panama hit an all-time low.) There was simply an oversupply. Developers sat on unsold inventory. They weren’t desperate for cash. They didn’t need to slash prices. They could afford to wait for a buyer to pay top dollar.

Faced with slower demand for this type of property, most developers pulled out of that segment of the market.

Gradually, the oversupply was absorbed. But Panama City’s population is growing. More than 1 million already live in the metropolitan area. As a percentage of population, that’s way out of whack with other world-class cities. More than half of New York’s tallest buildings, 53%, are devoted to office space. In Miami, 66% are residential. But Panama City tops them all: 75% of Panama’s high-rise buildings are residential.

All the while, demand for homes in Panama City is rising. The thing is, the second wave is hitting a wall. And that’s another way that Panama City is like a “Baby Singapore” or another Hong Kong.

Back in 1997, Hong Kong’s sovereignty transferred from the U.K. to China. It was a historic occasion. But many were pessimistic about what the future would hold for Hong Kong. Twenty years later, the handover has proved a huge success on one front: real estate.

From 1997 to 2017, prices in Hong Kong more than doubled. Today, the average sales price for a home is $3,182 per square foot—more than $3 million for a 1,000-square-foot condo. That’s higher even than prime central London prices.

This surge in pricing is partly due to strong demand from Chinese mainlanders and low-interest rates. But two other factors are at play. One is population growth, up 25% since 1997. The other is a lack of developable land. A fast-growing population, rising demand for homes, and a lack of developable land: It’s a big squeeze. And one that kicks real estate prices into the stratosphere.

In Singapore, land scarcity is so acute that they’re exploring the idea of moving commercial malls, offices, and storage facilities underground. (You’re looking at pricing of $1,757 per square foot in Singapore.)

Panama City, too, is feeling the pinch of a lack of developable land. The city sits on the Bay of Panama. That ocean fringe is a barrier to the south. To the north, there’s another barrier of protected rainforest around the country’s Canal. The land area that can be built on is very small. And that’s a big problem when you have a fastgrowing population, which Panama City has.

Demand for homes in Panama City is rising.

The land that is available is expensive. And it will be pushed higher in price. In the first wave of growth, the rising demand for housing was easily accommodated by new supply, because there was land to build on. That enabled Panama City to spread east and west of the downtown core. And that was attractive for a time: Folks were attracted to places with more space on the edge of town.

There are rare opportunities, however— the chance to buy low in one of these centrally located neighborhoods and profit—if you know where to look. These are places where there’s been a rezoning or change in permitting, opening a previously protected neighborhood up to development. Identify one of these, and I expect you could do even better than I did on my buy in 2005.