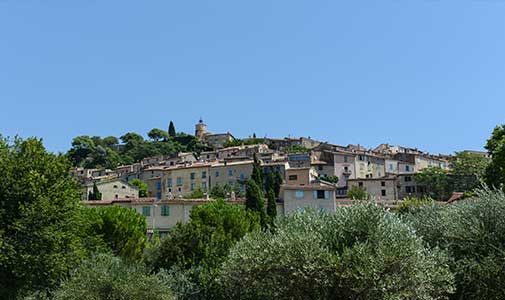 Typically French, the southern town of Fayence has long been a secret destination for tourists. ©Brandon Bourdages/Dreamstime.com

Stunning countryside, ancient cities and towns steeped in history to explore, fine cuisine from French classics to regional delights, beaches, mountains, and a warm and welcoming population. A low cost of living and the world’s best health system. Just some of the reasons why the south of France is one of the world’s most popular destinations for tourists, retirees, and people just wanting to live the European dream.

Well, there are a few things to consider. For a start, because of the popularity of the south of France, property prices and rentals are higher than many other parts of the country. And many of the desirable “must see” destinations like Nice and Cannes are so choked with tourists, especially during the summer holidays, that it’s a nightmare for the people who live there.

A tiny studio apartment in Nice will set you back $200,000 or more…although that’s still cheap when compared to some North American prices. You can get cheaper, but those are like living in a motel room.

Don’t let this put you off. There are still bargains to be had once you know where—and how—to find them.

I’ve rounded up some good-value buys below—see if any whet your appetite. My search was for places which give you that traditional south of France/Provence feel without the premium dollars. I’ve kept the prices under $150,000, but as you’ll see, you can get some terrific places for a lot less.

There are no foreign ownership restrictions in France.

A great-value home is for sale at €90,000 ($102,700) in Fayence, which is in the Var department. This pretty town is less than an hour from Cannes and the Cote d’Azur. Perched on the side of a hill it has traditional Provencal architecture without the Provence prices. It only has one bedroom but comes with a great kitchen, high ceilings, and parking nearby.

Or there is a two-bedroom town house for €118,000 ($135,500) in Callas—about an hour-and-a-half drive to both Cannes and Saint Tropez. The property has lots of character features and a roof terrace with spectacular views. Just the place to entertain visitors.

If you want to get closer to the beach but don’t want to pay the premium of Cannes or Nice, there’s a one-bedroom apartment currently for sale in Frejus—a Mediterranean coastal town about half-way between Cannes and Saint Tropez. With an asking price of €110,000 ($125,500) it comes fully furnished in a block with a swimming pool and a tennis court, and has a balcony for morning coffee overlooking the gardens. But if the beaches and Mediterranean climate are not your thing, consider where my wife Lorraine and I live in the Languedoc Roussillion region to the west of the Cote d’Azur.

This is truly a magical part of France with rolling countryside and beautiful towns and rivers. And, it’s within easy reach of both beaches and ski resorts. As you travel around you will see spectacular views of the Pyrenees.

An English friend is passionate about snowboarding but doesn’t like the cold, so he bought a house near us in the Aude department (close to the border of Andorra in Spain). He can be on the slopes in under an hour.

There’s a property for sale in the town of Espéraza in the Aude department, located about an hour from the beaches, ski resorts, and the “must see” tourist destination of Carcassonne. The property has to be one the best bargains in the south of France. You get six or seven bedrooms, four bathrooms, a fully renovated kitchen, and outbuildings, and it’s only five minutes from shops and services. It’s on the market for an asking price of €160,000 ($182,500). The home has plenty of room for all the family to stay, or you could run it as a B&B for extra income.

If you can’t decide if you want to live in France or Spain, check out the town of Prades. Located in the Catalan region of France, it’s 40 minutes from the Mediterranean coast, 40 minutes to Spain, and 40 minutes to the Pyrenees ski resorts. I found a two-bedroom apartment, which has been recently decorated, but could do with a bit of updating in the kitchen and bathroom.

While the internet is a good place to start, a Google search of “French houses for sale” displays 214 million results. While that appears a daunting proposition, there are alternatives. Here are some sites my wife and I used extensively.

I’m starting with one which doesn’t appear in a Google search (at least I haven’t seen it yet) and that is Leboncoin.fr, which is a sort of Craigslist of France.

You can search homes for sale by department under “Immoblier” (which is French for real estate). The site boasts plenty of search options, and many homes are advertised by private sellers. Use the site’s many filters so you don’t waste too much time. The main downside is that the site is French, and almost all the listings are written in French, so have Google Translate at the ready while searching.

You’ll need to send any inquiries in French, and if you get to the stage of inspecting, it’s helpful—though it’s not absolutely essential—to have a French speaker with you.

This is a portal which offers thousands of listings, again with plenty of filters to save you time. It also lists properties which appear on one or more of the many other sites selling French property. Most of the websites have the same listings. The site is in English though, and many of the homes are being sold for expats who are upsizing, downsizing, or leaving France. If it is the latter, they may be open to low offers.

An important tip when bargain hunting for a place in France is to carefully inspect the property before buying. Never buy direct off the internet. My wife and I always take a builder with us to inspect property before we commit to a purchase. One house we fell in love with needed so much work that it became prohibitively expensive.

There are no foreign ownership restrictions in France. Anybody with the money can buy property. So jump on the net and start looking.

And finally, consider this, fellow bargain hunters: You may be able to sell your house in the U.S. or Canada, buy in France, and live very comfortably on the money you have left over.

Before starting your search to find your bargain property in the south of France, you need to consider a few basic criteria:

Are you looking for a town house with little or no garden you can lock and leave; a traditional village house with garden; a country home with some land; or an apartment that requires limited maintenance?

2. Be aware of the hidden costs in buying an old property.

Older houses in France will almost certainly need some updating. It may be as simple as a lick of paint, but may involve electrical work, a new kitchen, and a bathroom with a better shower. Country houses often come with an outdated septic tank (called a fosse septique) and these are big issues for purchasers. The law requires the fosse to be checked when a house is sold to see that it is compliant with current standards. If it is not, it is up to the purchaser to rectify the problem (which could cost you anything from $2,000 to $11,500), so it needs to be taken into account when making an offer.

3. Are you prepared to take on a project?

Decide early if you want a project or a house you can move into straight away. There are lots of cheap houses available but they will require substantial renovation, and this can be costly. We’ve heard of people who have bought off the internet and then wondered why they ended up with a pile of loose stones in a corner of a paddock. Always do your due diligence, personally inspect the property, and get it checked over by a builder before making an offer.

4. What services do you want?

This is an important one because it will dramatically narrow your search. Do you need to be near a doctor or hospital? Do you want a train station or airport nearby? Is high-speed broadband an essential? Do you want to be able to walk or cycle to the boulanger, charcouterie, and an outdoor café for your mid-morning coffee? Do you want to be close to big supermarkets, or is a local shop good enough? Do you like the hustle and bustle of city living or fancy a more sedate rural village lifestyle?

House prices in France are often a lot lower than in the U.S. or Canada, but can vary dramatically depending on where you want to live. The French love haggling and won’t be offended if your first offer seems ludicrously low. Start low; you can always come up a little. So, hopefully you’ve got the basics covered now, and have an idea of what you want. But be flexible. My wife and I wanted a rural location with a little land and ended up buying a nine-bedroom maison de maitre in a town a short walk from shops and cafés.

Editor’s note: Ever dreamed of living in France, but didn’t know where to start? France has never been hotter as a potential place to live for discerning, budget-minded, future expats, due to its good climate, unspoiled countryside, excellent healthcare, and of course sophistication. And with Escape to France at your side, you’ll have—right at your disposal—everything you need to know to start enjoying La Vie Française on a budget. All the details are here.