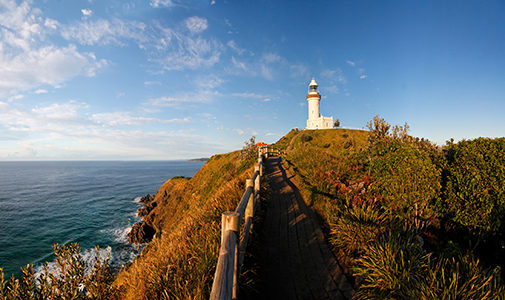 Head to Cape Byron Lighthouse for a walk on Australia’s most easterly point. ©iStock/Hanis

No visit to northern New South Wales, Australia, would be complete without a stopover in Byron Bay. The free-wheeling Pacific Ocean resort is home to all types of people—from celebrities to surfers to hippies.

This ultra-popular seaside town— a one-hour flight from Sydney to the south—was originally known for logging, sand mining, and whaling.

The arrival of hippies and surfers in the 1960s and 1970s encouraged an alternative approach, focused on preserving the area’s natural beauty. As a result, Byron Bay is now known for its enduring love of the environment (evident in its enviable coastline), and its diverse community.

My friend (and her 15-month-old daughter) and I recently spent a day in Byron Bay, taking in the sights. Here are my recommendations.

Cape Byron Lighthouse: For a Good Workout (and Great Views)

Built at the turn of the 19th century, the lighthouse was operated by resident keepers until 1989. Its now-automated light is clearly visible from town.

We charged up the hill, stroller in tow, to enjoy the best views of the surrounding ocean and hinterland. The walk has a slight incline, but it isn’t difficult to complete.

You won’t want to miss the incredible views on offer, which include regular sightings of turtles, dolphins, and humpback whales. There’s also a café where you can sit down, relax, and take it all in.

Folk: For Quirky Coffees and Smoothies

If you’re keen to dodge the crowds and head somewhere more typically Byron Bay for your post-walk coffee, hit up Folk.

Tucked behind a trailer park just outside town, this organic, ethical, plant-based café ticks all the boxes. Try the turmeric, rose, and baobab latte, or the banana smoothie with turmeric and tahini (it’s delicious—trust me).

This place also does delicious food— like smashed avocado on toast, hotcakes, burgers, and burritos—so be sure to bring your appetite. Lunch dishes range from $7.50 to $15. The palm-dappled sunshine on the terrace out front and the Woodstock- era soundtrack are free.

Manna Haven: For a Guilt-free Lunch

There are plenty of fabulous places to enjoy lunch in Byron Bay. But if you’re after something a little different, you should definitely visit Manna Haven.

Located on Jonson Street, Manna Haven is a modest, church-run café with a leafy patio. It provides a range of healthy (but delicious) options, including gluten-free, sugar-free, vegan, and raw.

You’ll find a range of hearty dishes— like chickpea tikka masala and pumpkin black bean corn enchiladas—alongside fresh salads, mouth-watering desserts (like a peanut butter mousse cake, which is, unbelievably, vegan, sugar-free, and gluten-free), and a variety of hot and cold drinks. Choose two main course options from their menu for $8.50, or three for $10.

For impossibly hip threads that won’t break the bank too much, you can’t go past boutiques like Tigani Lux and Arnhem Clothing, located on Fletcher Street and Lawson Street, respectively.

But for something more unusual, Karly Sunshine (also on Fletcher Street) is the place to go. Here you’ll find an eclectic mix of quality vintage and designer fashion, handpicked from across the globe.

Karly Sunshine promises to bring “a little slice of sunshine” to your everyday wardrobe, with “a hint of bohemia, a scent of seduction, and a pinch of playfulness.” It’s the essence of Byron Bay in wearable form.

Byron Bay Brewery and In the Pink: For an Afternoon Refreshment

Once you’re all shopped out, it’s time to refuel with a cold beer. And the best place to do that is Byron Bay Brewery.

Located at 1 Skinners Shoot Road, it started life as a pig farm, way back in 1898.

Then, in 1984, it was bought by a U.S. music producer and a couple of his friends. They swiftly transformed the venue into a music arena, hosting musicians like the Ramones. It wasn’t until 2004 that a couple of locals saw an opportunity to turn the old pig farm into a brewery, which is now run by a guy called Al.

Byron Bay is known for its diverse community.

While ale is very much on the menu, Byron Bay Brewery is best known for its craft lagers. If beer isn’t your thing, there’s a decent list of wines and ciders to choose from, as well as a traditional pub menu with a Byron Bay twist (think quinoa, herb-crumbed dory, and grilled halloumi with pumpkin pesto).

If you’d prefer something on the sweeter side, I suggest you head on down to In the Pink—Byron Bay’s longest-running local ice cream shop.

Located at 20A Jonson Street, In the Pink is a family-owned business that serves traditional, artisanal gelati, made on the premises using fresh, local, and Italian-imported ingredients.

You’ll find a long list of delectable flavors, including Coconut Rough, Ferrero Rocher, and Belgium Velvet. Two generous scoops cost $4.60. The difficulty is deciding which flavor (or flavors) to choose.