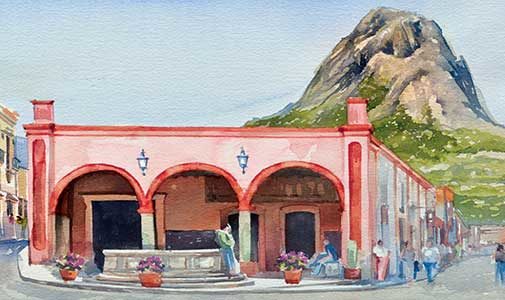 The cobbled sidewalks of Bernal, in Mexico’s Colonial Highlands, are dominated by a colorful baroque cathedral. It’s Monday morning, and much of the weekend’s festive attitude has dissipated. Merchants slowly raise doors and pose mannequins dressed in colorful vestidos (dresses) and guayaberas (loose-fitting shirts). The palpable, yawning sleepiness is a stark contrast to last night’s festive, music-filled frenzy.

Outside Bernal, I pull into Finca Sala Vivé—a winery owned by the Spanish sparkling wine company, Freixenet—and join a wine cellar tour. Since much less English is spoken here than in some other parts of Mexico, I stick out like a sore thumb. But Andrea quickly introduces herself as my personal translator. And since I am over 60, she makes sure I receive a heavily discounted Boleto Senior (senior’s ticket).

In a massive fermentation room, a lively, moustached sommelier points out gleaming tanks filled with grapes grown on the grounds. Though U.S. and Canadian expats are more familiar with Mexican beers, winemaking in central Mexico began in the 1600s, during the colonial period.

We descend a staircase to a cave 80 feet below the surface. Racks upon racks of bottles recede into the shadows, some recently filled, others from much older vintages. I learn about the myriad processes that eventually lead to fine sparkling wine and am warned not to use flash for pictures. (An abrupt illumination could startle an aging bottle enough that it explodes.)

“Just around the corner from Temple Nam Cham, in San Kamphaeng, northern Thailand, is a small community of healers,” writes IL Chiang Mai Correspondent Rachel Devlin. “A holy woman runs the proceedings against a backdrop of white walls and sparkling Buddha statues. Devotees receive individualized solutions, which may or may not include blessed water, joss sticks, massage, or herbal teas. The practitioners are genuinely caring and do not charge a fee for their altruistic ritual. It’s extremely touching.”

“In Nosara, Costa Rica, you can find a shaman or guide to take you on an Ayahuasca journey of cleansing and self-discovery,” writes IL Coastal Correspondent Kathleen Evans. “The ritual takes place with the aid of a natural hallucinogenic medicine (brewed from Amazonian plants) dispensed by qualified practitioners. These guides help oversee the spiritual, and often challenging, journey of mind, body, and soul. Those who have been through the ritual warn newbies to embark on the trip with an open mind.”

“Pchum Ben is one of Cambodia’s most unusual and important festivals and is known as Ancestors’ Day, or the Festival of the Dead,” writes IL Cambodia Correspondent Steven King. “Cambodians believe the souls of their ancestors return from the spirit world during the festival. To show respect, they visit local pagodas to pray and offer balls of rice to any hungry ghosts before the break of dawn. It is not uncommon for expats to join their local friends and respectfully experience this ancient and sacred ritual.”