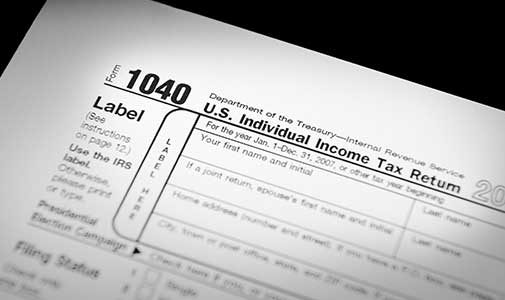 If you know the tricks of the trade, your foreign-earned income could be excluded from your return. ©Bruce Works/Dreamstime

Before I moved to San Miguel de Allende, Mexico, I worked as an attorney with the Internal Revenue Service. It was not unusual for me to think about taxes during idle hours on the weekend, at a Fourth of July fireworks display, or at other family events. For me, it was always tax filing season.

While this struck my wife, Rebecca, as odd at times, she always appreciated the money we saved in April because of my tax planning. Now that we have moved abroad and are on a more limited budget, it’s even more important to be thoughtful about the tax consequences of our actions.

Here are some things that we have done to prepare as the tax return-filing season for 2018 approaches. You should discuss these points with your tax professional if you live overseas or are considering moving outside the U.S.

The Need to File a Tax Return

The U.S. taxes its citizens on their worldwide income, regardless of where they live. So, even if you live in Mexico, Thailand, Roatán, or Bali, you are still expected to file a U.S. tax return. Don’t despair, though. There are exemptions and exclusions that can lighten your tax burden significantly, and that can make moving abroad a smart move, tax-wise. First off, though: Filing your annual tax return.

The requirement to file a return depends on your age, the amount of gross income you receive in the year, and your filing status (single, married filing a joint return or separate return, or head of household). Charts in the Instructions for Form 1040 set forth all the income thresholds, based on age and filing status, to determine whether you need to file a return.

The U.S. taxes its citizens on worldwide income.

Even if you’re not required to file a return based on the income thresholds, you should still file to get a refund of any tax withheld, or to obtain any tax credits—such as child tax credits, or healthcare-related credits—that you’re entitled to.

Due Date to File a Tax Return

What does that mean, exactly? Well, it means you’ve got extra time to file your return. But if you owe taxes, you still owe them on April 15, regardless of when you file your return. U.S. citizens who live outside the United States get an automatic two-month extension to file their return. This automatic extension also applies to the due date to pay any tax due, but the interest owed on any tax due will be calculated from the original due date of April 15.

Do you owe tax or are you due a refund? If you expect a tax refund, you should file your return by April 15. There is no reason to let the government hold your money longer than necessary. If you will owe tax, you may want to file by one of the extended due dates. But be sure to pay the tax you owe by the appropriate date to minimize the interest due.

One of the biggest tax benefits for expats living and working abroad is the FEIE. Under this rule, a U.S. citizen can exclude up to $103,900 of earned income for 2018. (The amount increases slightly each year.) Earned income includes payments for services performed in a foreign country. The income must be earned outside the U.S., and your tax home must be outside the U.S. too. To qualify, you need to meet either the bona fide residence test or the physical presence test.

If you were in the U.S. on January 1, 2018, you may not satisfy the bona fide residence test. In that case, you can still qualify for the FEIE by satisfying the physical presence test. To meet this test, you must be physically outside the U.S. for at least 330 days in a 12-month period of your choosing that begins or ends in 2017. This is the test that Rebecca and I needed to satisfy, and we had to cut short our summer visit to the U.S. to see family and friends and return to Mexico in order to do so.

The U.S. taxes its citizens on worldwide income.

However, if you are in your country of foreign residence on January 1, and if you otherwise satisfy the bona fide residence test, you will not be limited on how long you can spend in the U.S. for vacation or business during the year, so long as you intend to return to your foreign residence.

Under either of the tests, earned income does not include the interest and dividends you receive from your investments, or any pension or Social Security distributions.

Gain on the Sale of Your Home

If you own a home in the U.S. that you rent out, you may want to consider selling it to exclude some or all of the profit on the sale.

Under U.S. tax law, up to $250,000 ($500,000 for a married couple) of gain from the sale of a home may be excluded from income (and therefore, from tax) if certain conditions are met. The most important condition to satisfy if you are to qualify for this exclusion is that you owned the property and used it as your main home for two of the previous five years. This can be significant in terms of your financial planning.

If, instead, you sell the house on November 4, 2021, the look-back period would begin on November 4, 2016. You would not satisfy the requirement, because you would have lived in the house for fewer than two of the last five years. In this case, you would have to pay capital gains tax on the entire gain. Rebecca and I own a home in Virginia that we rent out. The monthly rental income covers most of our living expenses in Mexico. However, we could make a substantial profit on the sale of the house. While it’s nice to receive the rental income to cover our day-to-day expenses, over the next year, we will have to determine whether it is more beneficial for us to continue renting the house, or to sell it, instead, exclude the capital gain from income, and invest the profit.

Rebecca and I are careful to manage all our finances and assets from U.S.-based accounts, so that we can avoid having any foreign bank and financial account reporting obligations. Under U.S. rules, foreign accounts that hold more than $10,000 at any point during the year must be reported on Form 114 (filed through an online Treasury Department portal). This form is often referred to as the FBAR. If non-U.S. assets held for investment exceed $50,000, Form 8938 must also be filed, in addition to the FBAR.

Earned income does not include interest.

If you have a foreign business or other non-U.S. assets that must be held in foreign accounts, you should be aware of these reporting obligations. Substantial penalties apply for failing to file these forms, even if that failure was unintentional.

One of the biggest mistakes expats make in filing their taxes is continuing to file state tax returns as residents, even though they no longer live in the state. By filing as a non-resident, or part-year resident, you generally only have to pay tax on state-sourced income and can often save paying taxes on interest, dividends, and pensions.

Most states tax an individual’s gross income, just like the U.S. government. Generally, however, states tax nonresidents and part-year residents only on income that is sourced in the state. Examples include income from services performed in the state or rental income from a house located in the state. Social Security benefits, pension distributions, and interest and dividends from assets held in a brokerage account are often not considered state-sourced income.

Can you file a part-year resident or non-resident return? You may think that maintaining ties in a state where you used to live means you must continue to file a state tax return as a resident. But many states do not look at easily manipulated factors such as where you vote or hold a driver’s license to determine residence. For example, New York determines resident status by factors such as where you spend the majority of your time, the location of items of value, and your intent.

Under these factors, renting an Airbnb on the beach in Costa Rica during the winter probably won’t qualify you as a Costa Rica resident for New York state tax purposes. But owning a house in Costa Rica and only visiting New York for brief periods could allow you to file a non-resident return if you had state-sourced income to report.

Rebecca and I will save a considerable amount in state taxes by filing a Virginia nonresident tax return for 2018. Based on Virginia’s tax rules on non-resident status, we will only need to report and pay tax on the rental income from the house we own in Virginia. We do not need to pay tax to the state of Virginia on the dividend and interest income we receive.

Although we are fond of Virginia, we are happy with this result. As the esteemed Judge Learned Hand wrote in the famous tax case of Gregory v. Helvering, no man is “bound to choose that pattern which best pays the Treasury.”