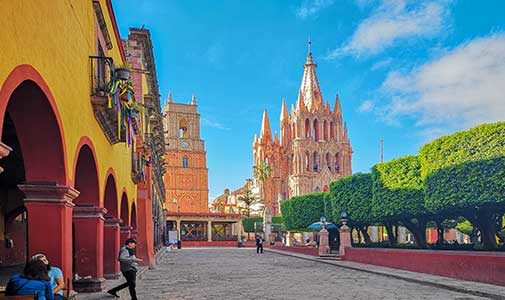 One of Mexico's hidden charms can be found in its interior, in San Miguel de Allende about four-hour’s drive northwest of the capital, Mexico City. ©Eoin Bassett

Michele Ostrove’s friends can’t help but envy her lifestyle. In 2014, she moved to San Miguel de Allende in Mexico, arguably the world’s most beautiful Spanish colonial town. These days she splits her time between San Miguel and Paris, France.

But before achieving her enviable international lifestyle, Michele navigated an unexpected, life-changing path. In 2010 she assumed responsibility for her mother, Marilyn, whose Alzheimer’s was advancing.

Michele is thrilled with her mom’s care.

When Michele’s father passed away, her mom’s only source of income was Social Security—$1,425 a month. In Santa Fe at that time, the cost for assisted living was $6,000 to $8,000 a month. Michele sold her mom’s house in Maine, but within a year the assets from the sale had been exhausted.

Michele quickly researched assisted living options in other countries. Mexico rose to the top of her list. She contacted a friend who’d lived in Lake Chapala for years, asking for advice. But by that time, her friend, Jane, had moved to San Miguel de Allende. Jane advised Michele that she and Marilyn would both be happier in San Miguel.

Soon after that, Michele, Marilyn, and their cat moved to San Miguel. It was a leap of faith, since they’d not visited the town before. But Michele was committed to making it work. “From day one, everything went well,” says Michele. “There’s such a strong support network in San Miguel. Many people are in the same boat, so it hasn’t been difficult to obtain support and good care here.” She met people easily. Many offered to help.

At a friend’s recommendation, Michele posted an ad for a caretaker on the Civil List, a local forum. She received five qualified responses. One was from Sofia, a Mexican woman who’d worked in long-term care in the U.S. before returning to San Miguel to live. Michele decided to move Marilyn into the long-term care home Sofia operates. Best of all, Marilyn’s Social Security payments cover her care, and Michele can see her mom whenever she likes. This arrangement also frees up the time Michelle needs to earn money through her online work as a freelance writer.

Michele is thrilled with her mom’s care in San Miguel. “It was life-changing for me when Sofia started to care for my mom,” she says. “She’s just a phone call away. I really appreciate the Latino culture when I watch Sofia and her staff. They are such sweet, caring people.”

Once Marilyn was in a secure, loving place, Michele could consider her own needs. In early 2017 she met Gerard, a French lawyer. They began a long distance relationship, bouncing between Paris and San Miguel. “We very much have an international relationship,” says Michele. “When I travel to France, I step into Gerard’s Parisian world. My mom doesn’t have a concept of time. She’s well taken care of and perfectly content when I’m gone. That gives me enormous freedom. The fairytale ending is that I can live in Paris a month or two at a time. It’s the perfect world.”